Digging in the Dumpsters of central Vermont to find dinner 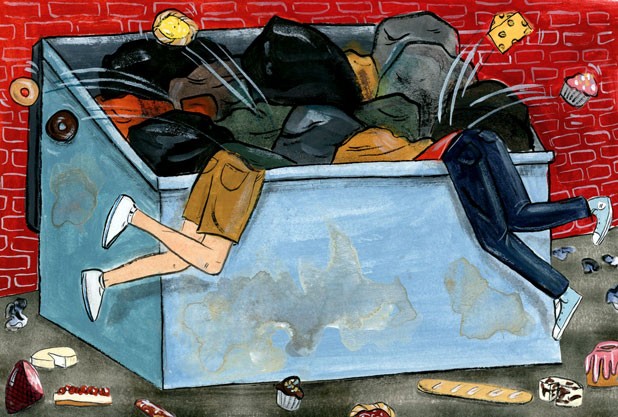 The Capital City Dumpster Tour begins in the parking lot of the Hunger Mountain Co-op late on a Saturday night. Lee and Barney, the chosen names of my tour guides, sit cross-legged on the ground studying a DeLorme gazetteer. Methodically, they plot a route that will take us to what they consider central Vermont’s best Dumpsters. The parking lot is empty of cars, as it’s well past closing time.

Lee and Barney determine to hit the sausage Dumpster, the cheese and butter Dumpster, the maple Dumpster, and the food-pantry Dumpster. Just for kicks, they throw in the socks Dumpster. And maybe they’ll try the bread Dumpster, though neither has ever been to it, and there’s a chance it might be locked.

“This is an all-out Dumpstering mission,” says Lee, the driver for the evening and the taller and more chiseled of the two.

“It’s like a fishing expedition,” explains Barney, who is wiry with ropy muscles and long sideburns. He couches his explanation with a disclaimer: We might not find anything, so don’t get your hopes up.

I have arrived at this tour somewhat by accident. Lee and Barney, who live in my neighborhood, were talking about dinner one night, and I asked them what they were having.

“Ham salad,” Lee replied. “With Dumpstered ham.” He was practically beaming. Of course, I took the bait.

He then regaled me with the story of how he and his friend Barney had recently been diving in garbage bins and retrieved a boneless half ham made by Vermont Smoke and Cure. With the spoils of that mission, they made a tangy ham salad and had plenty of meat left over for a few more meals.

They didn’t know why the ham had been discarded, though they guessed it was past its sell-by date. They used their best judgment, honed over years of Dumpstering, to determine that the meat was safe to eat. And it was — neither man fell ill after his meal of ham salad.

I had heard of people Dumpster diving for stale pastries at Dunkin’ Donuts just because they could. And I was aware of the more enterprising Dumpster divers who might search bins after farmers markets looking for bruised, yet perfectly edible, fruits and vegetables that had been tossed. But I had no idea the haul that could be taken from the Dumpsters of Vermont’s many specialty food producers. So Lee and Barney agreed to take me along on one of their trips.

After Barney’s warning that we might not find much, he explains that Dumpstering is better in the winter for one obvious reason: The food doesn’t go bad. They can often get through the whole season on Dumpster plunder. Granted, the snow and cold make it more challenging. But at least you’re not confronted with sweating blocks of cheese or the asphyxiating aroma of a Dumpster in summer.

From Montpelier, we drive to Waterbury, three astride on the bench seat of Lee’s truck. Our first stop is Green Mountain Coffee Roasters. Neither man has been to this site before, but they figure it’s worth a try. We park some distance from the refuse, and Barney outlines the simple rules: Be quiet, and if the cops approach, leg it. We don our headlamps and stride toward the Dumpsters.

Barney spots trouble immediately. Like most large food processors, GMCR makes use of an industrial trash compactor — a “nightmare” for Dumpster divers, Barney says. These have been installed over the years primarily because they make large-scale waste disposal easier. The Dumpstering-deterrence factor is an added bonus. We hop back in the truck and head to the next location.

Dumpster diving, or trash picking, has occurred as long as there have been garbage cans. Today’s Dumpster divers, or human raccoons, as I came to see them, are drawn to the act for many reasons — necessity, disapproval of waste, the thrill of the hunt, etc. For Lee and Barney, both in their late twenties and gainfully employed, it’s all of the above. While there is no specific law prohibiting Dumpster diving in Vermont, it’s technically considered trespassing and therefore not without risk.

When Barney started Dumpstering a decade ago, spurred largely by his punk-rock, counterculture activism, he started off small, pilfering dented cans of food from garbage cans. Over time, he learned where the most bountiful spots were. Eventually, he says, it “became a way of life.” Now he does it about once a month. Over the winter, Barney hit the Dumpster of a large bakery in Burlington and left with a season’s worth of edible, albeit days-old, bread. As revolting as it might sound, he’s also managed to pluck perfectly good pizzas, sandwiches, and fish and chips out of the garbage.

Like Barney, Lee began Dumpster diving for philosophical reasons. He decried the waste and wanted to do something about it. Plus, he eschewed and actively railed against corporate culture. His first experience was at a tofu factory where he managed to salvage many bricks of the stuff. Over the years, Lee has become less dogmatic about Dumpstering. Now it’s just a fruitful hobby.

Our second stop of the night is Red Hen Bakery in Middlesex. Like our first stop, this one is a bust. The Dumpster is barred and locked. This is done, Barney explains, not only to prevent people from taking food but also to ward against potential liability. Plus, many companies don’t want consumers — even those who haven’t paid for the item — using an inferior product.

“It’s like, We want this destroyed, but you can’t have it for free,” Barney says. “But we’re in a world where so much stuff is getting thrown away.”

From Red Hen, we take an epic detour over dirt roads to the Cabot Hosiery Mills in Northfield. While socks aren’t food, they are things that get discarded because of slight imperfections. We pull up to the Dumpsters and Lee swings the truck around so the gate is facing the bins — it’s easier to get away when the truck is pointed toward the road.

Lee and Barney lift open the Dumpsters and slowly lower the lids. Inside are bags upon bags of sock bodies, most of them missing some essential element — a toe, a heel, even a foot. But the pair know well enough that not all the socks are malformed. They search through the hosiery detritus. Between the two of them, they pull out five intact, though mismatched, socks.

Before leaving, they clean up the socks, putting them back in their plastic bags and returning them to the Dumpster. Then they set out to find some meat.

It’s 11 p.m., and, so far, the tour has the feeling of a fishing trip on a lake with no fish. We arrive at a nondescript convenience store — in what town I can’t say, because the trip has had a disorienting effect on my inner compass. Lee and Barney back up to the Dumpster at the rear of the store and dive in. Puffs of hot garbage smell hit my face as the two move around in the bin. They are looking for more ham, or really any meat. For some reason, this Dumpster often contains Vermont Smoke and Cure summer sausages, pepperoni and maple-brined bacon. It’s an “easy hit,” Lee says. This evening it did not disappoint.

Lee and Barney pull from the Dumpster a few unblemished packages of meat, as well as some random utility beers and a bottle each of Mike’s Hard Lemonade and Twisted Tea. But they are skeptical about the meat because of the unseasonable temperatures and ultimately throw it away.

“That was one of those Dumpsters you come away from smelling a little funny,” Barney quips as we hop back in the truck.

Next we hit an industrial park in Barre that is home to a number of dive-worthy Dumpsters. At Vermont Butter & Cheese Creamery a fence encages the Dumpsters, but Lee and Barney slip under it and sift through the trash to find some rounds of chèvre and a few containers of mascarpone.

Then we move on to Highland Sugarworks, where the Dumpsters are laced with the sweet smell of maple. This bin offers up a trio of intact bags of apple-cinnamon pancake mix.

From there, it’s a quick drive to the mother lode — the Vermont Foodbank.

The irony of Dumpstering from the food bank is not lost on Lee and Barney. But here food is thrown away if it is deemed too damaged, old or questionable to feed to the food insecure. At this stop, the duo has to compete with a hungry skunk scavenging its way through a pallet of jettisoned food.

“If his head is facing you, you’re OK,” Barney says.

The skunk, apparently uninterested in battling it out with humans over flour sacks, jarred olives and cans of coffee, takes off. Lee and Barney are free to pick through what remains. They grab a box of penne, a shaker of Kraft Parmesan, a package of beef jerky, some cans of creamed corn, egg noodles, salad dressing, canned tomatoes, cereal and more — enough to feed them for at least a week.

It’s nearly 1 a.m. by the time we finish. There are other places we could hit, but Lee and Barney are spent. The evening’s take is sufficient, even without ham. Maybe next time. Hope springs eternal in the mind of the dedicated Dumpster diver.