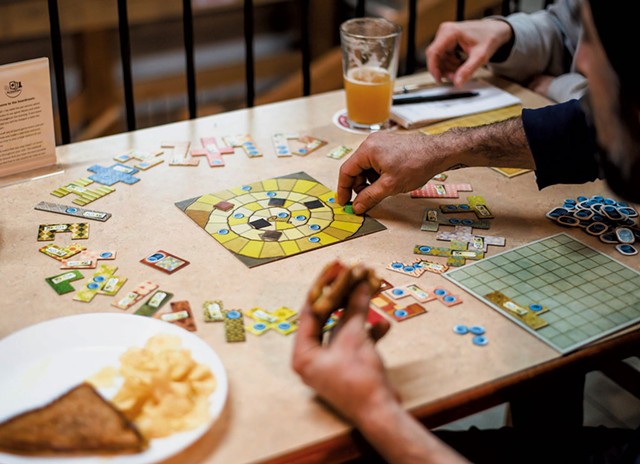 Our table at the Boardroom Café the other night held an unusual setting. It consisted of a bottle of hand sanitizer and two board games: Masterpiece, a favorite of mine from childhood for its combination of artwork and intrigue, and Mastermind, a one-on-one "code-breaking" contest.

I drank a Fiddlehead beer and considered which one to play as I waited for my friend Phinneus Sonin to show up. This evening, he would also be my competitor at Burlington's new two-floor mecca of games and retro snacks — grilled cheese, PB&J, Bugles and cookie dough — in a restored building near the bridge to Winooski.

Phinn possesses keen intuition, among other game-playing skills. Still, I marveled when he walked into the Boardroom looking like he stepped out of the Masterpiece box: a painter's subject come to life with his bright eyes and multicolored suede jacket. (I wore a gray beer sweatshirt.)

Taking a look at our table, Phinn picked up the hand sanitizer and announced: "This is the downfall of humanity." He set it on a nearby table and ordered an orange freeze. Surrounding us were more than 500 board games, many of which concern the demise of humanity — and a dice-rolling effort to save it.

The café itself feels like something of a boost for humanity. It offers row upon row of alphabetized order, from boxes of A Fake Artist Goes to New York to Zombicide Season 2: Prison Outbreak. The Boardroom provides a night of cheap kicks ($6 table charge) and invites low-pressure socializing. If you don't feel like talking, you can keep the chitchat to a minimum: "Whose turn is it? Wanna play again? Should we get a peanut butter and Nutella sandwich or fried bologna?"

But interaction is necessary: The café has no public Wi-Fi, so you can't play on or against your smartphone. A real person is required.

My person for the evening was a junkman and juggler who lives in the Old North End. Phinn's Burlington shop, Junktiques Collective, carries a selection of board games, from classics such as Scrabble to the contemporary dice game Cosmic Wimpout. He showed up branded with a new — and apropos — tattoo on his wrist: a single die. He was ready to play, and eat.

We ordered a giant pretzel that came dangling from a stainless-steel hook above saucers of mustard. We ditched the games I had put forth in favor of a 2014 board game that was new to us both: Patchwork.

The game, which the café rates "easy" by its color-coded system, pits art against commerce. The strategy centers on a crucial conundrum: collect money (in the form of buttons) or craft a quilt. It took me about three-quarters of the contest to grasp this essential notion. Phinn caught on within moments of the explanation from Preston Endres — a Boardroom staffer and self-described "second-generation geek."

During Endres' instruction, I knew I was screwed when Phinn asked him: "Are there other ways to generate currency?" (I was unaware that any methods at all had been discussed.) When it was time to play, Phinn went first.

He earned this advantage because, by Patchwork's rules, Player No. 1 is the person who most recently used a needle in real life. As it happened, Phinn had not long ago performed the old needle-through-the-arm trick in his magic routine. By this measure, he beat me to the first move. Once the game got going, Phinn generously helped me make my moves — even as he noted that my time was running out.

"You're dead," he said finally. "And your grandchild is wondering, 'Where's my quilt?'"

Phinn's generosity was less evident with that orange freeze, which he slurped down before I could have a taste. We also ate sandwiches: grilled cheese, salami and pickle for Phinn; peanut butter and jelly for me, made with Skippy crunchy and Welch's strawberry.

Eating and playing presented a challenge: Our hands were sticky and greasy, our sanitizer was banned, and our patchwork pieces were competing for space on the table with our plates.

As my competitive zeal picked up, I realized I wanted to sink my teeth into coarse and crusty bread, not the soft stuff of our sandwiches. Gaming calls for an artisan loaf with which to chew things over. "I'm a bread snob," I told Phinn as I gave in to a night of whole wheat slices.

After the game, we hung out with Boardroom owner Kerry Winger, drinking hot chocolate, eating doughnuts with bacon bits and Marshmallow Fluff, and sampling her special dessert, the Hailstorm. It consists of bread and butter covered with chocolate sprinkles — but not the waxy ones, Winger emphasized. She imports her sprinkles from the Netherlands.

The Boardroom menu, she said, is "all the junk food I want to eat." 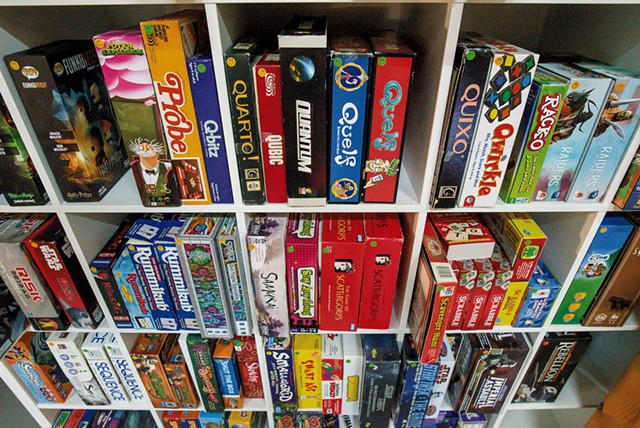 Winger, 48, left her job as a division administrator at the Vermont Department of Health to open the Boardroom. A Kickstarter campaign raised $8,210 from 112 backers, she said.

"I thought that it would be a good addition to the area," Winger told me. "There's stuff to do, but there isn't tons of stuff if you don't go outside."

Winger showed us a game called Capital Vices that was designed by two local game makers, and told us about a board game of galactic conquest, Twilight Imperium, that takes 10 hours to play. "That's 10 hours of your life that you may never get back," Winger said.

She pulled out Secret Hitler, a liberal-versus-fascist showdown in which one player is secretly Hitler.

I was afraid I'd never get any of my life back if we played that one.