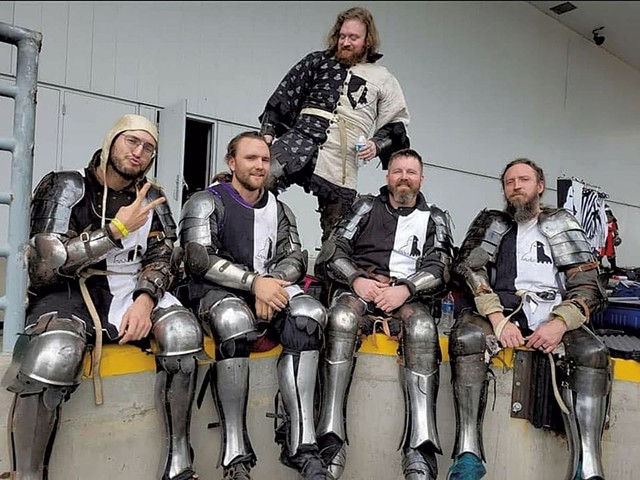 Think NASCAR — but just the crashes. Or mixed-martial arts, with swords.

That's how Jeff Folb describes the Armored Combat Sports league, which he's bringing to the Champlain Valley Exposition this weekend for its Northeastern championships.

He promises "no holds barred" beatdowns involving combatants in full suits of armor wielding weapons in five-on-five matches. Each combatant is "out" once he falls to the ground, so the last man standing wins it for his team.

Verily, it's not the glamorous, choreographed sword fighting immortalized in movies, Folb warns.

"This is kicking, shoving, punching, hitting, knock each other over trying to get them on the ground," said Folb, "which is honestly very similar to what we now kind of know happened in real life back then."

"It's just a blast to watch," he added. "It is really something you have to be there to feel."

That's the sort of thing a promoter of any event should say, but during an interview last week, Folb sounded genuinely excited. Teams from Massachusetts and New Hampshire — with names like the Haverhill Huntsmen and Nashua Knightmares — are scheduled to suit up for the game of broken bones. Women will square off in one-on-one duels.

There are few rules, Folb said, but "they're not out to injure each other." He compared the swordplay to rugby, football or mixed martial arts — "any type of extreme physical sport."

Vermont has no teams yet, but Folb hopes that exposure to the sport could inspire some to take up arms. The league only started a few years ago. Nationally, the number of teams has grown exponentially, he said.

"Many years ago, nobody thought the MMA would get to where it is," Folb said. "And they're selling out Madison Square Garden."

The event starts at 3 p.m. on Saturday, November 13, at the Expo in Essex Junction. For tickets and more info, visit vtgatherings.com.