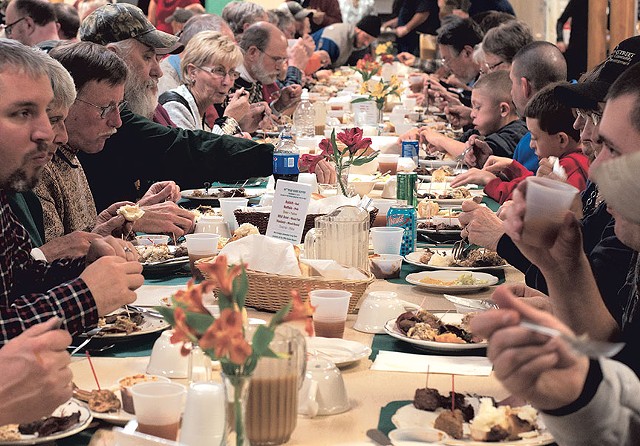 Men wearing plaid and camouflage gather in the church parking lot. Some trade stories of the day's hunt; others turn sausages over hissing grills. Savory scents fill the air as floodlights bolster the day's fading sun. From a stained-glass window in the church, Mother Mary gazes downward with an eternal not-quite-smile.

A man rushes toward the grill, empty sheet pan in hand. "They need lots of rabbit," he says urgently.

The grill man loads skewers onto the pan.

The server dashes back toward the dining room, which is also the function hall at the Bradford Congregational United Church of Christ, known locally as the "Congregational" or just "Congo" church. Near the front door, a plywood sign announces the evening's event in black-stenciled letters: "WILD GAME SUPPER, NOV 21."

This year's feast was the town's 60th. More than 800 guests showed up, according to longtime reservationist Janice Larabee. Most of them registered via printed forms, folded and posted with a $30 check and SASE.

Not so long ago the meal fed nearly twice that, Larabee says. In recent years organizers cut the 6:30 p.m. seating — sourcing, prepping and serving more than a thousand portions of moose, bear, beaver and boar was just too much to handle. Many on the all-volunteer crew didn't finish their shifts until well after midnight.

Still, in sleepy Bradford, the meal is a highlight on the town's annual calendar and has garnered press from the New York Times, NPR and other national outlets. Throughout the afternoon, cars stream off the highway and pull in to area bed-and-breakfasts and motels, then head to the village for the first seating at 2 p.m. By 4 p.m., cars with out-of-state plates line Route 5.

Behind the church, a steep embankment rises to Pleasant Street, where my grandmother spent many a fall evening roasting beaver in the yard of her big white house. No one remembers how Barbara Palmer ended up on beaver detail, but everyone in the family recalls the house-filling stench that caused her to move the operation outside.

But some people love the stuff. Says Larabee, "I think [beaver is] disgusting, but if you don't have it, people want it!" For a taste of this and other critters, guests must ascend the wide granite steps into the church sanctuary.

When my husband and I arrive, Dwayne Benjamin is at the altar strumming bluegrass-y ballads. To his left, Larabee sits at a table with two other ladies, handing cards to guests as they check in.

"Egan, Egan," she hums, thumbing through her box. She pulls out two tickets: 394 and 395. We take seats in the pews along with at least 200 other number-holding guests and listen to Benjamin croon.

One of the check-in ladies stands up. "Anyone with numbers 400 and below!" she calls.

We check our numbers and turn toward the door, filing past more ladies selling knit caps and crab-apple jelly from a table at the back. Down the wood staircase and into the dining room, ushers collect our tickets and guide us into a buffet line.

A boy hands me a plate, then sends me to the meat gauntlet, where I exchange greetings with 20-odd volunteers, many of whom I know. They ask after my parents and offer portions of roast and steak and sausage, each tagged with a colored toothpick.

Depending on the day, this room serves as food pantry and community meeting space. It's also the Sunday- school classroom, where village children study picture-book stories of plagues and miracles, pharaohs and famines. Here, too, they dress for the Christmas pageant, donning robes and wings to retell the story of a baby born to a virgin in a faraway manger.

But tonight we're here to eat.

Waiters dart through the room, carrying plastic pitchers of cider and brown gravy and trays of potatoes. White name tags identify them by first name only. All told, the volunteers are in the hundreds, says 2015 supper cochair Julie Porter, who adds that, with a shrinking church population, finding help is the meal's biggest challenge.

Upstairs, 20 musicians cycle through pro bono sets in the sanctuary. Prior to the big day, cooks prepare the meats, working in shifts in the church and high school kitchens. Fourteen women bake rabbit pies in their home ovens, Porter says.

Dozens more prepare roasts and sausages of buffalo, bear, moose and game birds, many following recipes volunteers have used for 60 years. So when my dad tells me the pheasant and rice is not to be missed, he's talking about the exact pudding he sampled decades ago.

"[The recipes are] all on an original note card tucked away until the time of the dinner," Porter says, adding that each dish is scaled to feed 500 people or more — down to the whipped cream spooned over the spiced gingerbread cake at meal's end.

Seated at a long table next to strangers, I stare down at the two-bite nibbles of bear and venison steak, wild boar bacon, rabbit pot pie, roast beaver, and sausages made with any or all of the above.

I plunge my spoon into a plastic ramekin of bear-and-venison chili, then contemplate the tomato-tinged red beans and ground game. It's a little ... gamey, but mostly tastes like chili. A strip of boar bacon is leaner than a domesticated cure, and nutty, as if the wild porker had gorged on fallen acorns before its demise.

In past years, hunters donated much of the meat. But with a shrinking church population and fewer members trolling the woods, supper organizers rely on Vermont's Department of Fish & Wildlife for illegal deer taken by hunters. And, Porter adds, "I hate to say it, but some of it's roadkill." The volunteers supplement with farm-raised animals purchased from co-ops and game preserves throughout the region.

This year, Pierson Farm donated 778 pounds of Hubbard squash, while the church paid for thousands of pounds of potatoes and cabbage, Porter says.

Porter is a Bradford native, raised in the church along with many of her relatives. "I was 10 when I was put into the cider room with the very important job of emptying gallons of cider into pitchers," she recalls. "It's been a family tradition forever."

Porter has also worked the buffet line, prepared specialty meat, and carried coffee, cider and gravy to thousands of guests. This year, her 2-year-old son helped her father sort the squash. Her mother, Anita Perry, made the pheasant-and-rice pudding, while her cousin and uncle worked the buffet line.

In 2014, Porter and cochair David McLam announced that this year's supper would be their last. In addition to working full time overseeing the baker's hotline at King Arthur Flour in Norwich, Porter is mother to two young children and busy in the community. Coordinating the supper kicks into high gear in August, and Porter says she spends most of her spare time on it until mid-November.McLam says he started sourcing meat for this year's dinner more than a year ago.

Finding volunteers is the hardest part. "The church population is getting on in age," Porter says. "So it's hard to keep this thing alive with only 30 or so [active members]. Of those, only a few are young enough to help. There's a group of people that has been doing it for so long, they're just plain tired of working on it."

But many hundreds of guests have made the meal a tradition — one troupe of boy scouts has been coming from Connecticut for 40 years, and they're not the only large group making the annual pilgrimage. The supper is also the church's major fundraiser, netting an average of $10,000 per year. "It keeps the lights on, that's for sure," Porter says.

Behind the game-supper sign, another one reports that the community has raised $60,000 of the $200,000 needed to repair the 140-year-old church. This summer, workers fixed the steeple and clock embedded in its spire, which had been losing time for as long as many residents can remember.

When Porter and McLam resigned, and announced the last supper, longtime volunteers Dan and Tracy Smith stepped in. With promised support from several community members, the couple committed to coordinating the 2016 feast. "We just don't want it to stop," says Tracy Smith. She has worked the supper since childhood, and she took on more responsibility as her parents phased out.

While everyone says that keeping the dinner tradition alive is trying, that's nothing new, according to Janice Larabee. "[This] started out with Helen and Cliff McLam way back when. Then Aris Eastman got involved. Then the Tomlinsons, and then Julie and Dave. Nobody wants to give it up, so someone has to take it over."

Tracy Smith seems hopeful for next year. "You feel like you've accomplished something once you do it," she says. "You feel good about everything. The people who come are always so thankful and appreciative."

The original print version of this article was headlined "End Game"