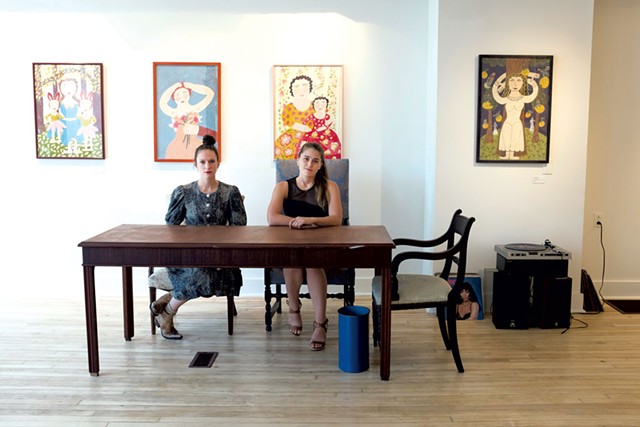 Kids who grow up in Vermont often spread their wings and take off for the big city. So it can be cause for celebration when those fledglings return — particularly when they put down new roots with a local business. That's exactly what Justine Jackson, 30, and Sophie Pickens, 31, did, opening an art gallery in Vergennes called Northern Daughters — NoDa for short.

In June, the women signed a three-year lease on the 1,860-square-foot space at 221 Main Street. They spent the next couple of months renovating and restructuring with the help of family members.

Pickens and Jackson began scheming to launch this project less than a year ago. During a recent interview in the gallery, both referenced a coffee-shop conversation they had last fall in Brooklyn, where Jackson had lived since 2014, and Pickens since 2009. Each intended to settle in Vermont eventually, they said, and plans for a gallery "happened pretty organically," according to Pickens.

"It's always been the plan to move home," she affirmed.

"[Coming home] has never been a question," said Jackson. "I never left; I just went somewhere else."

Both women grew up in Bristol, the daughters of artists and businesswomen.

Jackson's mother is the New Haven painter Anne Cady, whose work has been represented at the Woodstock Gallery and Middlebury's Edgewater Gallery, among others. When she was growing up, Jackson recalled, her mother readily incorporated her and her siblings into her life as a working artist. Jackson "absorbed [that artistic ethos] by osmosis," she said. Prior to NoDa's inauguration, she'd "been wanting to open an arts business for some time."

Pickens is the daughter of Pamela Smith, a painter and sculptor who owned the eclectic, beloved Bristol shop Folkheart, which closed in 2007. Smith's vibrant, life-size Madonna papier-mâché sculptures transformed the small storefront windows into a miniature gallery.

According to a 2007 article in the Addison County Independent, Pickens sometimes helped her mother with those works. Five of Smith's Virgin Mary-inspired figures were shown in 2008 at the American Visionary Art Museum in Baltimore as part of the exhibition "All Faiths Beautiful." One of Smith's Madonnas, "Mama Too," is currently on view at NoDa.

Both Smith and Cady are included on the gallery's opening roster, giving special significance to the gallery's name. Recalling early brainstorming sessions, Jackson said, "Once we got to 'Northern Daughters,' the conversation just stopped."

For Pickens, "'Northern' gave us a space and a place, related to this land that helped raise us, [and 'Daughters'] links to our human lineage." The connotations of being a northern daughter, she said, include "a certain wildness and fierceness — and being an artist in this day and age takes a certain cavalier braveness."

Though NoDa's owners are considering additions to their current lineup of six artists, they're perfectly happy to start small: "We want to really show who each artist is and represent them well," said Pickens.

Jackson and Pickens have a clear vision of how to create a space that welcomes the community around them. Their website claims: "We strive to be a space that merges the aesthetic of blue-chip galleries with the familiarity and authenticity of a Vermont general store."

When she thinks of general stores, Pickens recalls the Bristol Market, on the current site of the deli and housewares shop Almost Home. The market was the first place Pickens was allowed to go by herself as a child, she said: "I could cross the street to buy penny candy. I never felt uncomfortable in that space."

The town of Vergennes appears to reciprocate what Jackson called the gallery's "warmth of spirit." Even the mayor, Bill Benton, paid a visit. "We've been welcomed by our neighbors on Main Street and the community at large," said Pickens.

As they get settled, she and Jackson hope to grow NoDa as a venue for a variety of cultural events, including musical performances, talks and screenings. Their first temporary exhibition, "Madonnas Make You Brave," will open September 16 and appropriately feature a selection of works by Cady and Smith.

For now, the women are soaking up the thrill of their new venture with gratitude. As Jackson put it, "We're in the right place."

The original print version of this article was headlined "Generation Next"