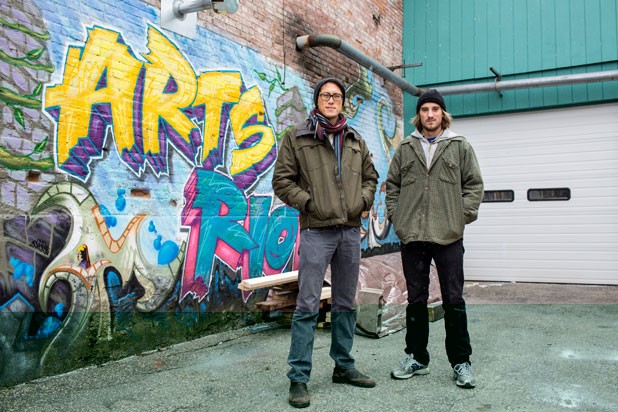 Tucked among the artist studios that populate Burlington’s South End is ArtsRiot, a gallery with a conscience, say its cofounders. Launched by Felix Wai and PJ McHenry in July 2012 as a website, ArtsRiot aims to bring people together — primarily via social media — through shared interests in art, food, music and culture. “The focus,” Wai says, “is making connections and inspiring people to engage and become more aware of their community.”

ArtsRiot added a physical space to its online territory last October when Wai and McHenry signed the lease on nearly 2000 square feet in the Howard Space, behind Speeder & Earl’s Coffee off Pine Street. Then they set to work converting the former Volkswagen auto-body shop into a gallery. Over a month and a half of scrubbing, the space went from looking like the “inside of an oil can,” according to McHenry, to a legitimate exhibition space — all crisp white walls and bright lights. ArtsRiot, which is identified by a sprawling street-art mural on a brick wall out front, did retain a few of the auto-body shop’s industrial flourishes, including the concrete floors and exposed piping.

Wai, 33, and McHenry, 26, inaugurated the ArtsRiot Gallery in December with their first public exhibition, which featured the work of Rwandan-born Vermont photographer Jean Luc Dushime. Now on view through March are the journals, models, sketches and designs of pioneering design/build architect David Sellers, who lives in Warren.

“Dave loved the idea of the community-centered gallery and business,” says gallery curator Hillary Clark. “He volunteered to bring a bunch of stuff to the space and help as much as he could.”

While hosting exhibition-based events is a huge part of ArtsRiot’s mission, Wai and McHenry say they feel they’re just hitting their stride with the Sellers show. In coming weeks, they’ll offer complementary happenings, including a lecture by Sellers and jazz musician Bruce Sklar, which will explore their respective creative processes.

McHenry and Wai, who first met through mutual friends, came up with the concept for ArtsRiot while both were working at Outdoor Gear Exchange on Church Street. Rather than letting the sometimes-monotonous world of retail get them down, the duo brainstormed during shared shifts and soon identified a common goal: to create a hub that would help locals plug into the city’s art, food and music scenes.

Later, during the course of a long text-message conversation between McHenry and Wai, the name ArtsRiot was conceived. The term communicates the pair’s objective in a simple, straightforward way.

Burlington has proved an ideal home for the venture. The small scale of the city has allowed Wai and McHenry to make countless connections, and the lively art scene has helped them stay afloat. “While we are still a hurting country, and people are struggling everywhere,” Wai says, “Burlington maintains its vibrancy; it still feels like there are things happening and thriving.”

Landing a gallery space was an important step for ArtsRiot, but there is no concrete plan for an endgame. “We’re not summiting a mountain here,” McHenry says. “We’re just working.”

Wai adds that, on a practical level, they’d like to be less worried about money. “Our ideas are now tempered by trying to break even, and I can’t wait to be free of that shackle,” he says. ArtsRiot, which is a full-time job for both Wai and McHenry, supports itself through online advertising, events, art sales and studio rentals.

A visitor to ArtsRiot passes through the main gallery and a small lounge into a space divided into six artist studios. Current occupants include spray-paint artist Scottie Raymond, textile artist and photographer Suzanne Dollois, painter and illustrator Will Barker, poet Trevien Stanger, designers Giovanna Jager and Tyler Hopkins, and the space’s newest additions, multimedia artists Bryan Miller and Phoebe Low. While the ArtsRiot tenants are creatively diverse, Wai and McHenry made sure each artist had one thing in common: a commitment to community involvement and working collaboratively.

ArtsRiot has a long list of events, collaborations and developments in the works; the excitement is almost palpable when Wai and McHenry talk about them.

While they already employ a number of interns from area colleges, the pair intends to flesh out the educational component of ArtsRiot. “One of my loves is teaching,” Wai explains. “We can’t do everything ourselves, and we’re working on structuring the company so that we can get people who are interested in the ArtsRiot components involved.”

For example, McHenry and Wai are planning a series of summer workshops on design, photography and healthy living. They’re also working on getting involved with Burlington’s burgeoning food-truck scene this summer.

Other ArtsRiot partners include the Winooski Natural Resources Conservation District and ECHO Lake Aquarium and Science Center’s Connecting the Drops project, which aims to maintain public awareness of water-quality issues through a public art and education display in downtown Burlington. Essex Junction-based Darkroom Gallery’s annual Champlain Valley Photo Slam will be held at ArtsRiot during Memorial Day weekend and ArtsRiot will join Burlington’s New City Galerie to put on a collaborative, community-centric exhibition.

Last September, for the South End Art Hop, Wai and McHenry hosted a block party in the Curtis Lumber parking lot. They had six artists painting live, a lineup of bands and food trucks. The idea was to show art in progress while having a big party. They also loaned out their colorful van as a shuttle for the event, a role the vehicle reprised during December’s Holiday sHop. ArtsRiot is working on a plan to fund a South End Arts District shuttle using the van this summer.

In an impressively short time, Wai and McHenry have transformed ArtsRiot from an amorphous digital entity into an active for-profit organization that seems to have a finger on Burlington’s pulse.

ArtsRiot is at 420 Pine Street in Burlington. artsriot.com

The print version of this article was headlined "Riot Squad".