Gaga for the Aga 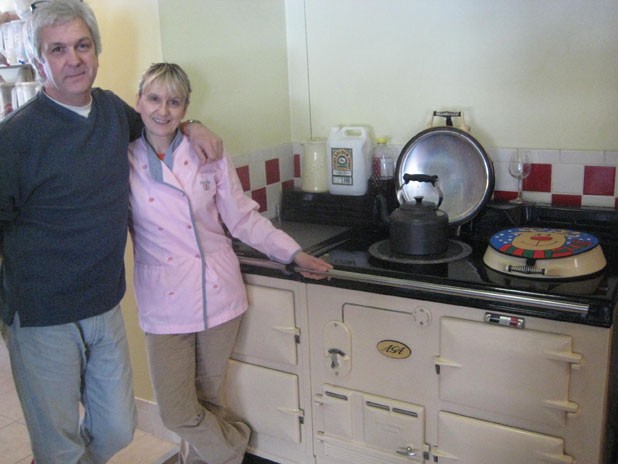 Like many dedicated cooks, Maxine Longmuir and Graham Hewison built their kitchen around their oven. But they went one step further — they built their business around it, too. The Warren couple own an AGA at the Sugartree Inn, an eclectically appointed bed-and-breakfast on the Sugarbush Access Road.

For the uninitiated, an AGA is a Shropshire-made cast-iron oven/range combo that uses radiant heat to cook Sunday roasts, boil water for tea and warm wet mittens in the winter. The heat comes from a central propane-fueled burner and is apportioned to four ovens and two ranges. Each oven — for roasting, baking, simmering and warming — runs at a different temperature, as do the simmering and boiling plates. Once an AGA is turned on, it stays on. It remains pleasantly warm to the touch all hours of the day and can heat a room or two with ease. The cookers are staples in British country houses and posh London flats, and are nearly impossible to find in the U.S.

Which is why Longmuir and Hewison, who are as British as bubble and squeak and Branston pickle, brought one with them when they moved to Vermont from London: Longmuir couldn’t imagine running a B&B without her AGA. “It’s my baby,” she says proudly. The couple love their AGA so much, they incorporated it into the name of their business with the blessing of the parent company.

Longmuir, who does all the cooking at the inn, remembers when Gill Faldo, ex-wife of professional golfer Nick Faldo, introduced her to the AGA in the mid-1990s. Never before had she tasted food with such flavor, she recalls. Because there is no open flame or electric heat source within the AGA’s oven compartments, food doesn’t dry out. Longmuir says, whereas a mushroom would become desiccated and shriveled in a regular oven, in an AGA the fungus would end up juicy and succulent. “There is no better way to cook food,” she contends.

Once you buy an AGA and have it installed in your kitchen, it’s there for life. Since they weigh nearly a ton and take two days for a certified technician to put together, if you move, the AGA stays. “I cried leaving my AGA [in England],” Longmuir admits.

But now Longmuir has a new cooker, affectionately called Mrs. Bridges after the cook in the British sitcom “Upstairs, Downstairs.” Mrs. Bridges occupies a large section of real estate in the inn’s kitchen, where the cream-and-black beauty churns out bowls of organic oatmeal for breakfast and bakes up batches of scones for afternoon teas. But she (no, the AGA is not an “it”) isn’t used for her cooking skills alone. “She does my ironing as well,” Longmuir says.

Mrs. Bridges’ services don’t come cheap. A four-oven AGA like Longmuir’s costs between $12,000 and $15,000 and uses about $5 worth of propane a day. But it’s worth it for the couple, who say more than a few guests have left vowing to get an AGA of their own. “It’s become a real focal point of our operation,” Hewison says. “Everyone is captivated by it. It just becomes the heart of the home.”