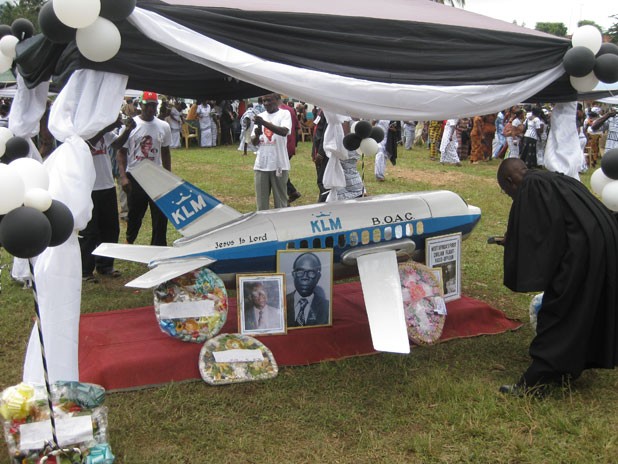 Senator Barack Obama is on the minds of most West Africans these days. The Democratic presidential candidate’s presence reaches even into remote areas such as the Eastern Volta Region of Ghana. Like much of the third world, Ghana is wired; cellphone coverage reaches nearly everywhere, while landlines are unusual. Internet cafés are sprouting up in every community, and satellite TV and Internet connections are common. And so, information about the U.S. presidential race is readily available.

Recently in the small village of Govieffe, Obama’s name came up repeatedly during the traditional funeral services for 85-year-old Chief Gustav Adolphus Komla Agbo. After the services, a Yavoo (Ewe for white person) walking among the more than 2000 mourners was immediately assumed to be American and was repeatedly greeted with a thumbs-up and shouts of “Go, Obama!” Stopping to chat, people immediately expressed their belief that Obama would win, but expressed concerns that racism in the United States is making the contest tighter than it should be. Even with Ghana getting ready for its own presidential election in early December, the topic of conversation seems to be more often Obama than who will be the country’s next president.

Located about 6 rugged miles into the low mountains above Kpeve, the village of Govieffe is up a winding, single-track dirt road surrounded by the thick foliage of the African bush. The road is not improved, so even the most fearless taxi driver travels no more than 20 mph on the way up and even more slowly on the way back. In addition to ruts as deep as 3 feet, a driver must weave around goats, chickens and many of the mourners who have made their way on foot to the services for Chief Agbo. Nonetheless, buses from as far away as Cape Coast, a more than five-hour drive, made the trip to participate in the all-day ceremony in the hot sun and high humidity.

Govieffe is the birthplace of Chief Agbo, and after nearly 75 years he has returned to be buried. In Ghana culture, death is as important as birth and marriage because it marks the transition from earthly life to the world of spirits. If a person has led a just and righteous life, then his or her spirit becomes as worthy of invoking with libations as are the gods. Chief Agbo evidently lived a life worthy of remembrance. Not only did he become an important figure in the building of the West African airline industry, but he also remained connected to the village of Govieffe, investing in the improvement of life for everyone there.

In Ghana, it is believed that the soul begins its journey only after the dead body is buried among the ancestors. For this reason the deceased is transported back to his or her birthplace from wherever he or she passed away. However, when someone dies in a foreign country and relatives cannot meet the cost of conveying the corpse, the deceased person’s hair and fingernails are cut and sent to his or her birthplace for burial. Not only are these parts of the body easier to transport over long distances, but they are considered to symbolize important identifying features of the dead person in life and in death.

Fortunately, Agbo died in the capital city of Accra, only three hours away by car, so his body was returned home. Preparations for his funeral were quickly made, but the service was delayed for a week and a half to give mourners time to travel from around the country. The chief of the region came, as did former colleagues from Ghana Airlines and government officials involved in the transportation industry. The crowd was so large that the sole dirt street in the village was choked with buses, taxis and personal cars. There was no place to park them all. Because Agbo was so revered, a memorial brochure was produced and sold for one Ghana cedi (about one U.S. dollar). Also, a commemorative wall calendar with Agbo’s picture was printed and sold for an additional two Ghana cedis. Both sold briskly.

The three-hour service was held in a local soccer field, a raw space made up of rocks and weeds and canted at about 20 degrees downhill from one goal to the other. A half-dozen large tents borrowed from a hotel in the regional capital city of Ho were set around the field. In the center, Chief Agbo’s casket was placed under a black canopy flocked with white bunting. The casket was shaped like a KLM jet to commemorate his long affiliation with the airline industry. Agbo spent his career there, beginning in 1957 as a flight radio officer and then working as a flight instructor for Ghana Airways, Ghana Air Force and Nigerian Airways. He completed his career as a managing executive of West Africa Airlines.

After the call to worship by Rev. E.K. Anku, a local Presbyterian minister, the ceremony quickly moved into a memorial for Agbo’s contributions in life. His wife, his children and numerous colleagues offered tributes. Nearly every homage mentioned Barack Obama. Agbo’s widow invoked Obama’s courage, while his children referred to the senator’s dedication to his family despite a demanding career. Most notable was the Rev. H.K. Gbotsyo, chairman of the Western Presbytery, who focused most of his speech on Obama’s life, using it as a model for Agbo’s even though the American is nearly 40 years the chief’s junior.

“Obama’s attitude of fortitude is exactly how Gus lived,” said Rev. Gbotsyo, referring to the deceased. “When Barack Obama was a child, his mother would wake him at 4 a.m. to do his homework. When he complained, his mother told him she didn’t do this for her own entertainment. She did it because he was destined for more. From a child, Gus exhibited that kind of fortitude and dedication.”

After the service, a traditional tribal chief dressed in black robes cornered the only white person at the funeral and introduced himself. Once he discovered the visitor was from the United States, he launched into a soliloquy on Obama. After a few moments, it was clear he was stumping for the candidate. Such unpaid volunteers were numerous among the crowd. As small children snuck up behind the visitor to rub the hair on his arms, their parents would offer encouragements such as “Go, Obama!” or ask, “You like Obama?”

The ceremony for installing a new chief is called an “enstoolment,” because the newly elected chief sits on a ceremonial stool, much as a king sits on a throne. With all the support shown for Barack Obama this afternoon, his potential election to the presidency of the United States is not far from anyone’s mind. Without a doubt, were Obama here today, he would be enstooled unanimously as the new chief.

As the afternoon progressed and the sun began to set, the Asafu Military Company Brass Band played the somber hymn “Amazing Grace,” and it was clear there was not a McCain supporter in the bunch.

Vermont writer Laban Carrick Hill has been in Ghana for two months and will be there for three more, as a visiting professor at University of Cape Coast. Click here for his blog.