With China Express and One Pepper Grill, a young entrepreneur brings more flavors to the O.N.E. 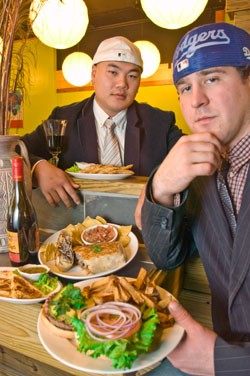 When you’re the hands-on owner of two restaurants, it can be hard to find time to sleep. “I work 16, 17, 18 hours a day,” says Sam Lai, proprietor of two North Street eateries: newcomer One Pepper Grill and China Express, where he’s also the head chef. “You have to have a good relationship with your wife,” he goes on. “I call the restaurant my first wife. My real wife doesn’t mind.”

Lai opened One Pepper on his 31st birthday, September 28, with the help of co-owner Max Saltis, a onetime China Express delivery driver. And “hands-on” is the operative word. Sitting down for an interview, the restaurateur pats the table. “I hand-built every table here,” he says. “The benches, I did the leather.”

Lai declares, “I’m a big eater. I love food,” but he didn’t always plan on a career in the restaurant business. His youthful passion was for tattoos. When his father, Ping Lai, opened the first China Express on Shelburne Road in 2000, the junior Lai was in the middle of an apprenticeship in a tattoo studio. “My dad said, ‘You have to come and help me, and you’re going to be an owner,’” Lai recalls. “That’s when I tried to quit the restaurant business. I just wanted to be a regular kid and have my life and do something I love.”

At age 22, Lai already had substantial professional cooking experience behind him. Native to the Fujian Province of China, his family moved to the New York area in 1988. By the time Lai was 13, he had quit school to cook in his family’s Chinese-American restaurants.

Through his teens and early twenties, he continued to work in New York, cooking up any type of cuisine he was asked to prepare. Today, all that experience comes in handy. “I have a really good memory, so I can cook things that I haven’t cooked for years and remember exactly what I did,” says Lai.

When the Lais relocated to Vermont in 2000, they opened the Shelburne Road China Express while maintaining two stores called Hong Am in New Jersey. But they focused their energies on Burlington when business in the New York-New Jersey area plunged following the 2001 terrorist attacks. And Sam Lai, who often alludes to his love for his “folks,” ended up doing his familial duty.

But that didn’t stop him from following his first love: Lai opened Cherry Street Tattoo in Burlington in 2005. Despite the prime location, however, he says he quickly realized it was difficult to find properly trained employees who would draw customers: “You don’t need a good spot for a tattoo place; you need good artists.” Today, he considers the failure a learning experience, saying, “At least I made it happen. Most people never get to go for their dreams.”

By 2006, when Lai debuted his first North Street restaurant, he had accepted his path and realized that beauty can be edible. “Cooking is fun for me; it’s not just cooking,” he says. “I’m an artist.”

His newest venture, One Pepper, is on the site of the former vegan eatery New Ethic Café, which closed early this year. Lai owned the property, but the café’s mastermind and manager was Owen Hoppe, who used to work for him at China Express.

Lai’s concept for One Pepper Grill would make his former vegan partner blush. Noting that “the economy sucks right now” and “people need to catch a break,” he offers affordable beef, including steaks in the $14 to $15 range. The chef first ages each ribeye for 30 days in the cooler at China Express, then marinates them overnight in his secret Chinese-inflected garlic, ginger and soy potion. The result is a well-marbled, butter-tender slab of beef that barely requires a knife. The earthy and slightly sweet marinade is addictive. Topped with some zesty tomatillo-and-cilantro salsa verde, and it is fusion at its most successful. The steak-on-a-stick appetizer boasts the same tender meat, scented with curry and accompanied by Thai peanut sauce.

Such combinations represent Lai himself, who explains, “Growing up in Jersey and New York, I knew a lot of Hispanic people.” Lai’s native tongue is Fukienese, but he also speaks Mandarin, Cantonese, Japanese, English and Spanish. In fact, he says he learned Spanish before English, becoming fluent in the latter only after moving to Vermont.

Nowadays, Lai speaks with barely an accent. “I’m a big talker,” he says. “Customers used to come to Shelburne Road just to talk, but they always ended up ordering something.” He’s a great listener, too, and laughs easily.

Hanging out with Latino friends in the city, Lai learned to love their cuisines, and One Pepper has a decidedly south-of-the-border influence. The “Mexicana” section of the menu boasts a collection of soft tacos and 1-pound burritos. The salsa verde tastes authentic, as do the grilled plantains and lightly seasoned rice and black beans that accompany the steak.

Lai hopes eventually to open a truly international restaurant in Burlington. “In Tokyo, 50 percent of restaurants are fusion. In New York, there’s a lot like that, too,” he says. For now, Lai is pleased to be serving affordable meals, though he maintains, “People are getting higher-end food here for the price.”

The American aspect of the fusion menu is represented in One Pepper’s large selection of burgers. Lai gets the patties frozen and soaks them for an hour and a half in the same marinade used for the steaks. The light flavoring doesn’t so much recall China as an ambrosial, very slightly sweet, classic American burger. A topping of sauce au poivre on the One Pepper Burger lends French flair.

While a few diners have taken issue with Lai’s use of frozen burgers, he insists the meat is easier to marinate in this form. But the fresh steak fries on the side are hand cut — and unlike those anywhere else. Using original recipes and flavor combinations was a calculated risk, says Lai, who acknowledges, “It’s very hard to win people’s hearts when you’re doing something new.”

So far, the gambit has paid off. Just a month in, the restaurateur says, “We’re ... not having problems paying our bills, and that’s great.” His distribution of 99-cent burger coupons at local colleges certainly helped bring in patrons. Lai says he’s seen several students transition from using scrounged coupons to paying full price. And he’s encouraged to see “a lot of repeat customers,” Lai says. “I pour more of my heart in it so people can afford to come in three times a week instead of one.”

To stimulate lunch business, Lai keeps a grab-and-go cooler stocked with sandwiches, salads, drinks and Cheesecake Factory slices in flavors such as double chocolate and dulce de leche. Homemade cookies, brownies and cornbread wait in a basket by the bar.

Next month, Lai will add another quick option: sushi. Before opening One Pepper, he had considered starting a full sushi bar in the space, but he was concerned about the high cost of labor. So he’s starting a smaller venture called Sushi Express, housed inside China Express. The creative and traditional rolls and nigiri will be available in the One Pepper case, too. Sushi Express will offer vegetarian options as well as soups, salads and una don. Original dishes will include the Queen City roll, composed of eel, avocado, cucumber and crabstick; and the Vermont roll, featuring salmon, apple and maple syrup.

One day, Lai hopes to leave One Pepper entirely to Saltis, a 25-year-old former UVM engineering student. Like Lai, whom Saltis calls “my mentor and my best friend, even a father figure at times,” the younger man came to a later realization that food was what made him happiest. He switched his major to entrepreneurship and now calls himself “the mayonnaise to Sam’s sandwich,” helping to carry out Lai’s big plans, from legal work to managing the eatery.

Affordable steaks and make-your-own stirfries may keep customers coming back to One Pepper, but Lai says that he has a dream “to create something big.” He has yet to define that plate, but hopes it will be an icon of his adopted home state. “I want to come out with a uniquely Vermont dish that people can be proud of, like a local baseball team,” Lai says passionately. “I want people to feel proud of the state when they eat it.”