A standup comic makes Vermont teens laugh at, and think about, their finances 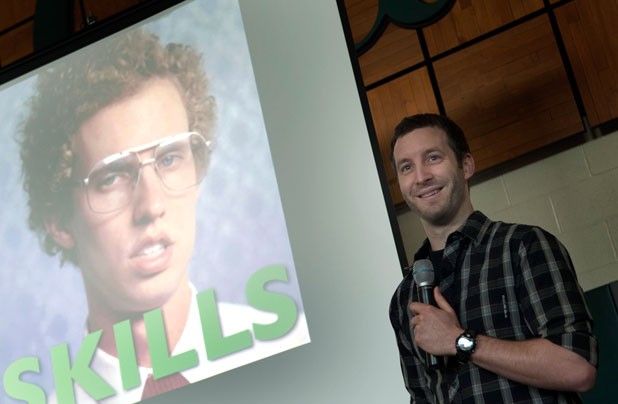 What can a blockbuster movie, a ’96 Dodge Neon and a group of 4-year-olds with marshmallows teach teenagers about handling their money wisely?

If this sounds like a setup for a comedian’s one-liner, it’s understandable. When 31-year-old Colin Ryan isn’t traveling the state speaking to high school students about managing their money, he’s honing his skills as a standup comic — with about 50 shows so far in Montpelier and its environs. In some respects, Ryan’s two careers have a lot in common: They both require him to be entertaining, provide food for thought and connect with his audience. As he puts it, “Humor is the shortest distance between two people.”

Officially, Ryan’s day job is as Vermont’s financial literacy instructor. His full-time position was created in November 2009 with a two-year grant from the U.S. Small Business Administration, which Sen. Bernie Sanders secured with help from the state’s credit unions. It has a simple mission: Get teens to care about and understand their personal finances, so they grow up to be more responsible, successful and happy adults.

On a recent Wednesday morning, Ryan stands on an auditorium stage at Winooski High School in front of several hundred rambunctious teenagers, many of them talking, laughing or chatting on cellphones.

“I know it’s hard to get excited about a financial speaker,” Ryan says into a microphone, trying to quiet the students down. “But this,” he says, pointing to a slide of $50 and $100 bills projected on a screen behind him, “this is something we can all agree on.

“I once found a $50 bill in a library book,” he continues, “which is why I think you all should read more.”

Ryan clicks through his slides and stops at a promotional poster for the 2007 movie Transformers. It features actors Shia LaBeouf and Megan Fox beside a panoply of shiny new cars from General Motors. Next, he shows a short clip from the film, which he calls “a two-hour car commercial.” It features the young, sexy couple drooling over a tricked-out Camaro.

“What is the message of this scene?” Ryan asks the students when the clip ends. “‘If you have this car, Megan Fox will want you.’”

Ryan is doing more than pandering to teenagers’ love affair with hot rods and Hollywood hotties. The Transformers bit is actually part of his first lesson on responsible spending: “Drive like the rich.”

As he explains to the students, the average millionaire — contrary to popular portrayals in television and films — does not drive a brand-new, high-priced luxury car such as a Mercedes, Lamborghini or Aston Martin. In fact, Ryan cites statistics showing that fewer than 25 percent of all millionaires in the United States bought a new car in the last four years; most own well-built, practical vehicles that they keep for a long time.

“My last car was a ’96 Dodge Neon. One year, the snow caved the roof in,” Ryan confesses, to widespread titters from the audience. “No one ever told me, ‘Colin, your car is awesome!’ But I paid $1000 for that car and drove it for five years.”

Ryan’s message to students isn’t that they should be stingy or not want the finer things in life. He’s simply working to instill in them the awareness that marketers are constantly trying to pry their money loose from them, and that they shouldn’t buy what they can’t afford.

That message transitions into Ryan’s second lesson: “Understand credit cards.” From a financial point of view, he warns his audience, credit cards will be “the biggest threat in your life ... I want you to think of that credit card like it’s on fire and is burning your fingertips.” In other words, handle with extreme caution.

Ryan’s presentation isn’t rocket science, nor does he intend it to be. As he explains later, he doesn’t want students to be intimidated by the idea of taking a financial literacy course. He just wants them to recognize the consequences of the financial decisions they make each day.

“That’s the whole point,” he explains. “Most people feel dumb about money but are too embarrassed to admit it.”

Ryan admits that when he landed this gig, in November 2009, he was no rocket scientist on financial matters, either. In fact, over the last year and a half, he’s been learning about personal finances right along with his students. He doesn’t have a degree in economics, business or education; before this job, the San Diego native spent four years working as a reporter for the Williston Observer, the Colchester Sun and South Burlington’s Other Paper.

But what Ryan does have is a knack for connecting with teens and explaining to them, without sounding preachy or condescending, why money matters in their lives.

“We all have this picture of this guy in a suit, and he’s lecturing, and there’s a slide with all these columns of numbers,” Ryan says. “I think what that tells us is that money is boring and confusing, and not something we can all relate to.”

Clearly, Ryan is not that stuffed shirt. He wears jeans, a flannel shirt and sneakers to his presentations. They’re conversational, lighthearted and largely unscripted, and Ryan doesn’t affect any pseudohipness, which he suspects would immediately turn off his audience.

Like any aspiring comedian, Ryan’s training has been a baptism by fire. He recalls his first-ever presentation to a group of Upward Bound students at the University of Vermont. The program helps first-generation, college-bound seniors succeed in their postsecondary education. Though Ryan prepared for four months, he admits he still bombed.

“I felt 1000 years old. I felt boring and irrelevant,” Ryan recalls. “They hated it, and I hated it because they hated it.”

Unlike comedians who die on stage, Ryan was able to interview his students afterward and ask them what didn’t work in his presentation. They offered him valuable feedback, and Ryan perfected his “act.” Since then, he’s given the presentation to nearly 2400 students at 26 high schools around the state.

In one respect, Ryan’s Winooski audience differs from most of his high school crowds: It’s more racially and ethnically diverse, with a sizable number of young women wearing head scarves, suggesting they belong to families of recent immigrants. Does that alter his approach?

No, Ryan says. With regard to lower- and moderate-income students, though, he has drawn two general observations. On the one hand, when he discusses managing money, such students are more likely to “get it,” largely because their families are under constant pressure to do so. On the other hand, he suggests, many of these same students do not have role models at home showing them good spending habits.

For example, Ryan describes a presentation he gave at a parent-child center to a group of teenage moms, most of whom were on fixed incomes and struggling to make ends meet. He recalls asking the young mothers to name good money habits they’d learned from their own parents.

“They all just laughed, and it broke my heart,” Ryan says. “They have no one in their life who is showing them how budgeting can help them. There’s a sense that they’re overwhelmed by it all and they can never change their status. So, I’m honored to be the person who gets to go in there and change that a little.”

Toward the end of Ryan’s Winooski presentation, he shows another video clip, which re-creates a famous study from the 1960s called the Stanford marshmallow experiment. A group of 4-year-olds are each given a marshmallow and promised a second marshmallow if they can refrain from eating the first one until an adult returns. The researchers filmed the kids’ humorous, and often unsuccessful, efforts at delaying gratification.

As Ryan explains to the students, the study tracked the children’s progress later in life and made some fascinating discoveries about the kids who “passed” the test (i.e., didn’t eat the marshmallow immediately) and those who “failed” it (ate the marshmallow).

The researchers discovered that the kids who failed the test typically had more trouble paying attention and maintaining friendships. Their SAT scores were, on average, 200 points lower than those of the students who passed. They also had significantly higher body-mass indexes and, most troublingly, struggled more often with substance-abuse issues.

“What do we realize about this video?” Ryan asks the teens. “This is not about 4-year-olds. This is about all of us and our ability to control our impulses.”

Ryan’s 40-minute presentation seems well received by students and teachers alike. Courtney Poquette, Winooski’s only business educator, comes up afterward to commend him. She was instrumental in bringing Ryan to Winooski, in part, she explains, because state budget cuts have reduced her own job to part-time status.

“I think it’s ironic,” she says, “that we’re balancing the budget by getting rid of a class that teaches kids how to balance a budget.”

Ryan can certainly sympathize. His own position is slated to expire this fall when the two-year grant does, unless he finds funding to extend it. “The reality that I’ve discovered is, these kids want this,” he says. “They really do.”