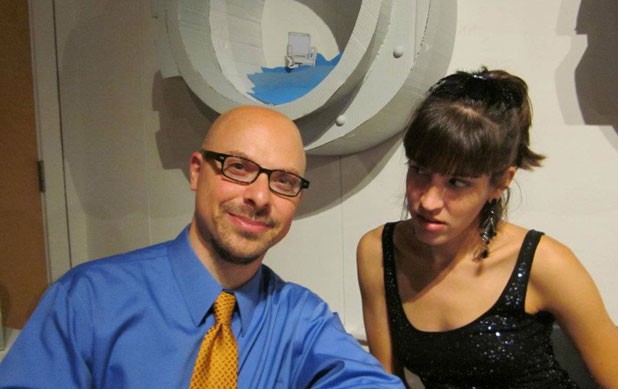 It’s the middle of January, which in Vermont means three things. One, it’s cold, and will remain so for at least three more months, possibly four. Two, thanks to seasonal affective disorder, half the state’s population is depressed, and maybe contemplating a move to California. But I’d urge folks to put a hold on that U-Haul rental because of our third January thing: the annual Higher Ground Comedy Battle, which takes place this Saturday, January 21, at the Higher Ground Ballroom.

Typically, reportage on local comedy in these pages has been driven by marveling at how far along the art form has come. And with good reason. In the last couple of years, homegrown standup has experienced a boom in popularity, directly tied to the increase in both quantity and, more importantly, quality of performers in and around these Green Mountains. Not to sound like a broken record, but local comedy is increasingly for real. (By the way, that will be the last time I make that statement. From here on in, it’s just assumed, OK?)

The coming-out party for Vermont comedy was actually last year’s HG battle, which was by far the strongest lineup in the contest’s eight-year history. The months that followed saw a multivenue, three-day local comedy showcase (the Green Mountain Comedy Festival), an increased number of comedy nights and open mics cropping up around the state, successful comedy benefit shows for Tropical Storm Irene recovery, and the opening of Vermont’s only comedy club, Levity, in Burlington.

Why was last year’s battle so much better than in previous years? The increased opportunity for local cutups to hone their chops. Practice makes perfect, especially in an unpredictable discipline such as standup. Given that comedians have even more performance outlets now, it stands to reason that this year’s battle could, nay, should outstrip even last year’s show. But, hey, no pressure!

A glance at this year’s lineup bears out that assertion. For starters, 2011’s champ, Nathan Hartswick, returns to defend his crown. I caught one of his sets recently at Main Street Landing and can say he’ll be tough to beat. He’s even more polished now and, as a comedian friend of mine noted that night, Hartswick has a great sense of timing and joke construction.

But I’m guessing some of last year’s finalists may have something to say about this. Colin Ryan, who led my ballot last year, is back, as is fellow finalist — and Levity manager — Carmen Lagala, who was a revelation as a rookie last year. Also on the bill is Lagala’s boss, Levity founder Ryan Kriger. Is it me, or does that have the potential for some serious workplace awkwardness should Lagala win? (And she could.)

There are several other familiar names and faces on the marquee, as well, including battle vets Mike Thomas, Natalie Miller, Pat Lynch, Sam Pelletier, Kyle Gagnon and Tony Bates. And then there are newcomers Josh Star, Kit Rivers, Abhi Kulkarni and Jordan Paquette.

But perhaps the most intriguing entrant of the night is (apologies to Battle host Lee “the Butcher” Seelig for stealing this line) the “Susan Lucci of the Higher Ground Comedy Battle,” Alex Nief.

Nief is returning from a two-year battle hiatus. Prior to his break, he was a perennial finalist. But he’s never won, hence the Lucci comparison. When he’s on, Nief is a talent. Regardless of how he fares, it’s great to see him back, and his presence suggests a great night of local comedy.

If you happen by the BCA Center this Saturday, January 21 — and I suggest you do, if you’re not into comedy — you may notice something a little different about local indie duo Parmaga. Namely, that drummer Brett Fiorentino suddenly looks an awful lot like the bassist from Man Man and Santigold. Funny story: That is, in fact, the bass player from Santigold and Man Man. His name is Chris Shar, and he’s new to town. So be nice. The word from Parmaga’s Bryan Parmelee is that Fiorentino left the band over the summer when he moved to Connecticut. Shar approached Parmelee about jamming in June, which eventually led to him joining the band full time on drums, and occasionally bass. Parmelee adds that the newly constructed duo is working on a follow-up album to last year’s Ghost Pops EP, which should appear soon. In the meantime, check out the new duo at the BCA Center, along with Montréal’s Parlovr, Northampton’s Mountain Interval and DJ Vinyl Ritchie.

DJ Disco Phantom is expanding his empire. In addition to spinning at every cool show that’s ever happening anywhere in Vermont, he’s getting into the promotions game. (By the way, I’m only sort of joking about the ubiquity of Mr. Phantom. Dude played nearly 150 shows last year. Really.) He debuted DJ Disco Phantom Presents with a New Year’s Eve gig at the Monkey House. It went so well, he’s doing it again this Friday, January 20, at the Monkey House with headliner Xenia Rubinos, Hello Shark and a new(ish) outfit, Golden Claws. That last band bills itself thusly: “When all the ’80s retro hipsters, ’70s synth dronesters and noise evangelists have fallen out of fashion yet again, there will remain the likes of Golden Claws, who make compelling music by utilizing whatever sounds and tools serve their vision.” Dickish pomposity aside, their debut EP, The Desert, is an ambitious suite of music that utilizes adventuresome melodies, sparse but crafty instrumental arrangements and powerful harmonies that is, indeed, compelling. This band bears watching.

Congratulations to Higher Ground, which came in as the 51st-most-popular live music nightclub in the world in 2011, according to Pollstar’s annual roundup, which ranks clubs by volume of ticket sales. Other notable regional clubs in the rankings include Metropolis in Montréal (No. 9), House of Blues Boston (No. 3) and Paradise Rock Club in Allston (No. 15). Several New York City clubs were found throughout the top 100, including Terminal 5, which ranked No. 1 overall. Interestingly, Burlington has exactly as many clubs in the top 100 as does San Francisco: one.

DJs Fattie B and Craig Mitchell are at it again, with the fourth round of their ongoing Soundclash DJ battle at the 1/2 Lounge on Wednesday, January 25. To recap, the two local turntable titans go head to head, each trying to outdo the other with crowd-pleasing jamz from across the many-splendored spectrums of hip-hop, R&B, reggae and whatever the hell else they feel like playing. Then they box, presumably. Rounds one and two were unanimous draws, but Fattie B pulled out a victory at the bell in round three. The guess here is that Mitchell comes loaded for pay back.

Last but not least, the next installment of the Brick Church Music Series at the Old Brick Church in Williston is this Friday, January 20, and promises to be quite the hootenanny. Slated to appear are two excellent local string bands, the String Fingers Band and all-star outfit After the Rodeo. Yee haw.

Anthony Hamilton, Back to Love