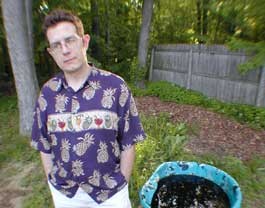 Comic books were not on Jan-Ives Campbell’s mind when a tired driver ran a stoplight and — BANG! — broadsided his car on a highway in his hometown of Nashua, New Hampshire. His car was totaled that day five years ago, and Campbell was knocked into a coma that lasted a week. It wasn’t exactly Kryptonite, but the accident nevertheless changed his life. Lying in the hospital nursing a punctured lung for three agonizing months, Campbell realized that being a manager at Filene’s was no longer enough. He must create superheroes.

So he set out in pursuit of his dream. And though his goal has so far proved stubbornly elusive, Campbell has continued to follow it, displaying determination some might call deluded — some heroic.

The hospital epiphany wasn’t the first time Campbell toyed with the idea of writing and publishing comic books. He’d been a fan of Superman and X-Men for years. As a teen-ager, he had played Dungeons & Dragons and other role-playing games, impersonating the heroes he admired. But in the fall of 1997, his life was looking pretty conventional. He had just proposed to his girlfriend Christine and was ready to put down roots. A week later, the near-death experience crystallized his obsession; the moment he checked out of the hospital, Campbell started his search for a comic-book artist.

The effects of the car crash are still evident — several deep scars run along Campbell’s cheeks and chin, and his speech is often slurred. Though he remains fully competent, he recalls nothing from the day of the accident. The healing process has been slow and torturous, but he has more than just recovered; he has gestated a dream, struggling against the odds to produce — if not sell — his action-packed masterwork, League of Super Groovy Crime Fighters.

Campbell and Christine — now his wife — moved to Burlington just over a year ago, looking for a change of scene. By day Campbell occasionally still works at Filene’s, where Christine is a manager. The couple lives in an unassuming duplex with a tidy lawn in the New North End. But down in the basement, beyond the bright white walls of the stairwell, Campbell explores his other life as a struggling writer and publisher for Ancient Studios.

His office is a monument to fan-boy culture: The walls are plastered with comic books and posters, the shelves populated with old-school Star Wars figures standing at attention. Every horizontal surface is littered with graphic novels. The room is the size of a walk-in closet, but to Campbell it’s a pop-packed fortress of solitude. Here he sits at his desk beneath a small window and contemplates how to save the world — or rather, how his characters can save it.

“I do a fully detailed script, like a screenplay,” he says. “‘He punches this guy.’ ‘He enters the room.’ Like that.”

The ideas develop in his head over many months, and then — SHAZZAM! — Campbell types out an entire plot, complete with actions, settings and lines to fill the dialogue bubbles.

Campbell’s ragtag artistic staff is as informal as a business gets. The second issue of Super Groovy Crime Fighters listed on its masthead “Marvelous” Mitch Massey, who pencils in the drawings based on Campbell’s script; “The One and Only” James Taylor then inks over Massey’s drawings; and “King” Michael Kelleher adds color and digital lettering. In the next three issues, however, these contributors, who are spread across New England and communicate almost entirely by phone and through e-mail, are not listed — perhaps because the future of the comic is so uncertain.

The competitive world of comic-book publishing and marketing tests the strength and courage of even the most perseverant. Though the odds are stacked against them and the future looks grim, “Creative” Jan-Ives Campbell is a relentless leader, and his quest is far from over.

League of Super Groovy Crime Fighters is Campbell’s endearing revision of the Silver Age comics — produced between the late ’60s and early ’70s. Tougher language and more challenging themes transformed the hokey old Batman into the modern Dark Knight. The first non-white heroes hit the stands, although the era was notorious for adding cheesy Blacksploi-tation and Kung-Fu characters to the previously crew-cut-dominated worlds of Green Lantern and The Flash.

“Every race was made to fit their stereotype,” Campbell explains. That is, every Asian knew karate, and every black character had an Afro.

In his comics, Campbell imagines a ’70s where everybody loves disco and Hostess Fruit Filled Snack Cakes — the preferred munchies after a good pull on a reefer. The characters have stock names like Atlas, X and Mr. Phenomenal. Campbell parodies racial stereotypes with the jive-talkin’ Black Belt and a fictional ad for the Hai Karate martial arts school.

Crime Fighters follows the tragic career of the government-engineered Sergeant America, who is fired from his military post because of cutbacks in federal funding. Sergeant America has one skill: He can kill people in thousands of different ways. With nowhere to go, he tries to find his former girlfriend — who is married to his arch enemy, the Scepter — and gets a job at a supermarket. But when he discovers the strange technology of his deceased father, Sergeant America begins to exert a vast and deadly power. In the meantime, an extraterrestrial empire attacks the Earth, giant robots explode and buildings topple left and right.

The stories are meandering and goofy; Campbell constantly postpones his explanation of who the Super Groovy Crime Fighters actually are, and it takes several issues for the Crime Fighters to finally meet Sergeant America. But as satire, the comic books are jammed with wit and subtle jabs; the Crime Fighters are always stopping the action to dance to “Get Down Tonight” and insisting on how bad they are. The Crime Fighters series is almost guaranteed to get a laugh. That is, if anyone reads it.

“There’s no money in comic books,” Campbell says bluntly. Since his first print run he’s never seen a profit, and most of the books are still in boxes on his office floor. He began selling his first issue of Crime Fighters through the Diamond Comics Distributors, which has a virtual monopoly in the U.S. Like all distributors, Diamond caters to the established companies, such as Marvel and D.C. Comics, and pays little attention to indie companies like Ancient Studios. Campbell printed a less-ambitious 3000 copies of his next three issues, and a mere thousand of the fifth. All these were downgraded to black-and-white drawings and cheaper newsprint pages.

Despite these setbacks, Campbell remains stubbornly good-humored about his daunting campaign. On the first page of Issue #2, Mr. Phenomenal sits in an easy chair and says, “If you read Issue 1, you’ll no doubt detect that we’re not colored anymore.”

“Now I know you didn’t just say we was colored!” cries the Black Belt, finger raised. “What this reject from a Play-Doh commercial is tryin’ to say is this issue is in fabulous black… and white. Emphasis on the black, you dig?”

On his Web site, www.ancient studios.com, Campbell has published the tongue-in-cheek “Masochist’s Guide to Self-Publishing,” and he aggressively advertises the thousands of unread Crime Fighters back issues. He has tried selling directly to local comic-book stores, but says the owners are reluctant to buy.

Earth Prime Comics owner Chris Farrell “never got back to him,” says manager John Carl Pepe. “While she found [the comic book] interesting, she had overlooked it for whatever reason. He has a really nice product, there’s no doubt about that.”

Of course, a nice product won’t fly if the ball keeps dropping. After two years of scrambling, Campbell has reached his financial limits. Because Crime Fighters has no significant following and most stores won’t experiment with new series and companies, his business has ground to a halt. “That project is on indefinite hiatus,” he says.

But he’s not turning in his cape just yet. Campbell is at work on a new, more serious series called Crusader Faith, about a female Christian warrior from Boston fighting renegade demons in the year 2039. The printing company he used in the past has asked $2000 for the first print run of Crusader Faith, a sum he can no longer afford. So he has placed the entire issue on his Web site, including all pictures and text.

As for the future of Campbell’s endeavors, the questions read like a Spider-Man cliffhanger: Will Ancient Studios persevere? Will Super Groovy Crime Fighters get any attention? Will Crusader Faith ever find herself inked onto actual paper?