Bread is one of the staples Gahlord and I consume almost daily, in some form or another: sandwiches, toast, croutons and crumbs. I used to bake it weekly at home for quite a while, but there are so many talented bakers supplying loaves in this part of Vermont that I eventually started buying bread at the store. It's been great to get my hands floury again. 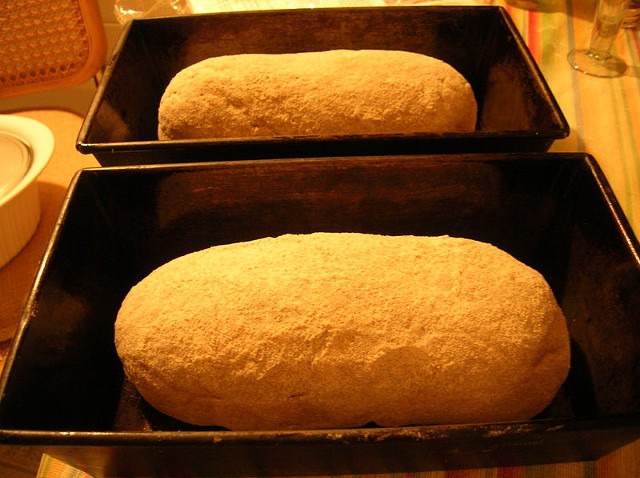 The sourdough experiment continues at a slow pace. I kneaded some more flour into the starter and formed it into loaves two days ago, and covered them loosely with plastic wrap to rise, but they're not doing anything. They're really heavy. I think I'm going to dump them back into a bowl with some water and a bit more flour, mix it up, and see what happens.

The Red Hen bread pickup went smoothly, so that's what we're eating right now. Each loaf smells heavenly, and contains 2.5 pounds of Gleason Grains wheat flour, grown near Middlebury. Each bread bag had an earnest note from the head baker stapled to it, explaining that while they feel that the Localvore loaf was successful within the limitations they had to work with, it's different from their other breads because the Vermont wheat is different, due to the soil and climate, etc. Red

Hen usually buys wheat from Colorado. There's a very limited supply of wheat grown in Vermont, so Red Hen had to ration their flour supply carefully to be able to commit to offering a month of loaves for the localvore group. This bread (see left) is more dense, and a bit more moist, but I really like it. One slice, and you feel like you've had a meal.

Some notes on what Champlain Valley localvores are eating, starch-wise: We have access to locally grown flour (all-purpose, wheat and rye), cornmeal, and oats. Locally grown new potatoes are now available in both area food stores and at farmers' markets, and I bought a gallon of locally raised popcorn at the Intervale kickoff potluck. That's pretty much it, but those ingredients can form the basis of many foods: oatmeal, pasta, crackers, dumplings, pancakes, latkes and, of course, bread. I love Japanese food, and I think if I tried to eat 100% local all the time I'd eventually miss rice, but I'm fine without it for a month.

I made gnocchi for the first time two nights ago, and I have to say they're the best thing since sliced bread. Basically you boil potatoes, skin them, push them through a ricer, add a little bit of wheat flour and a beaten egg or two, then roll them out, cut them, and cook them briefly in boiling salted water. If I did it regularly, I think it would only take an hour from the minute I boiled the potatos to having little fork-marked pasta-dumplings on the table, but the process probably took me closer to an hour and a half. I made a lot, and we've been eating them with the ratatouille as a sauce. Yum.