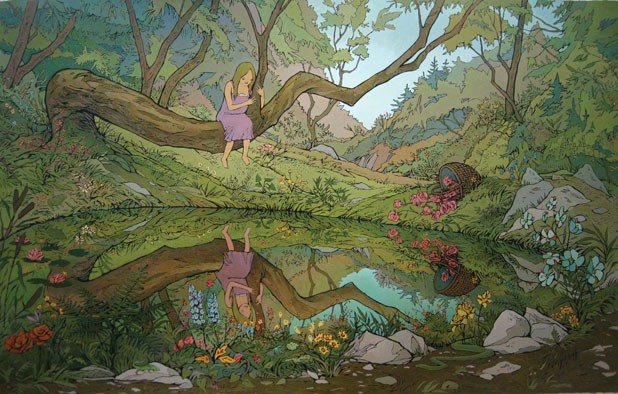 In the front gallery of the BCA Center, a hunched monster glares through a clear-paned polygon roughly the size of a basketball. Suspended inside the shape, a small, painted figure stares out, seemingly weightless. The figure is a stylized girl, boxy through the torso with feeble, tapered arms, no discernible neck and small, slot-like eyes. As the girl looks straight ahead, the swarthy beast regards her, pupils yellow and irises blazing red. More than eight feet high, he dominates the room, a nightmarish creature with a domed head and long, skeletal fingers. Frightening? A little — but he’s only made of papier-mâché and burlap.

Size-wise, the monster is the centerpiece of Vermont artist Scott Lenhardt’s current exhibit, theatrically titled “Good House.” The other works here offer a different aesthetic. Seven small dioramas are mounted to the walls of the front room, each installed at eye level above a pink-carpeted, semicircular platform on which viewers can stand to peer closely into Lenhardt’s delicate inventions in glass, paint and polymer clay. He has populated each diorama with figures painted on panes of glass installed vertically, like windows.

As one looks into each diorama, the glass disappears, leaving only the illusion of the figures standing at intervals. Interspersed with the painted figures are landscapes of polymer clay and metal so well wrought and carefully lit that the tiny tableaux seem like actual little worlds. In “Frazetta’s Cat Girl,” a figure similar to the girl trapped in a polygon inhabits a polymer-clay jungle landscape.

The fantastical nature of Lenhardt’s artworks is not surprising, given that he is strongly influenced by the artist Frank Frazetta. The latter’s paintings and comics from the 1960s and ’70s have become a kind of fantasy standard in American culture. Lenhardt first saw Frazetta’s work at the car shows he attended with his father as a kid.

Lenhardt — a mixed-media artist and commercial illustrator best known locally for designing dozens of Burton Snowboards — only recently discovered that the images he remembered from his youth were mostly by Frazetta. Lenhardt is inspired not just by the fantasy but by the 1970s color schemes. That palette is perhaps most obvious in his diorama titled “God on a Mountain,” in which a multiarmed, tangerine-colored diety hovers over a craggy mountaintop that peeks from creamy woolen clouds in a burnt-orange sky.

In the dioramas, the male and female figures seem like doughy counterpoints to Frazetta’s bethonged goddesses and sword-wielding strongmen. Lenhardt paints each of his characters, from humans to big cats to rats, with both fine detail and simplified form. Each character stares blankly from its glass vitrine. Taken together, they seem like parodies of the person seeing them: Viewers, too, stare into the glass with blank curiosity. And, unlike Frazetta’s demons and angels, Lenhardt’s characters seem aimless in their glass landscapes, which makes them oddly endearing.

In the back room of the gallery, Lenhardt has installed six finely carved and painted birds, each perching on a branch that extends from an elaborately painted, organic backdrop, with a roof overhead. These whole constructions are hung on the wall, each seemingly capturing a moment in the life of a bird.

A diffuse radiance emanates from lights that overhang each of these delicate creatures, which are modeled on species photographed by a friend of the artist. With their intricately painted foliage, alert postures and rounded features, Lenhardt’s birds convey both warmth and quickness. His unique painting style — tiny strokes of paint that build into a soft, almost furry surface — combines with the plump shapes of the birds to make these museum-style presentations approachable. For viewers, there is a sense of surprise, as if we are coming across these extraordinary animals up close in the wild. And, unlike the stuffed creatures in a natural-history institution, these birds seem alive, their hearts still thrumming.

Lenhardt suspends reality and skillfully erects a fantasy world in its place. The exhibit’s title is a theater term, and, like a theatrical production, his show is intended to be a collaborative journey between viewer and “performer.” He writes, “If it’s a good house, then the audience is engaging with the stage and there is a nice give and take happening between the two, and that’s what I work for.”

Inside the glass walls that bookend the BCA Center, viewers are presented with a curious duality: peering into Lenhardt’s fantastical, invented world, and out through the gallery windows into our own humming reality.