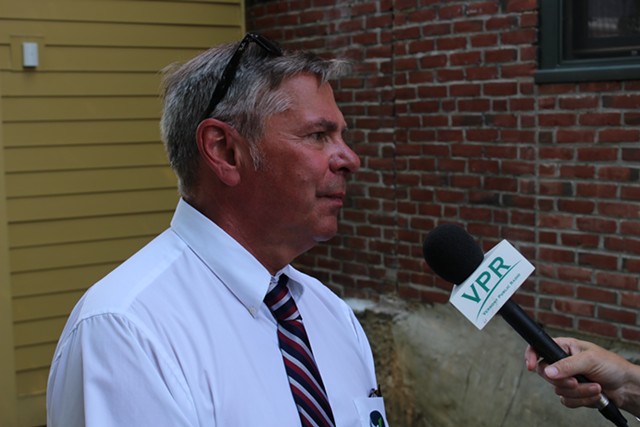 Floyd Nease has been a presence at the Vermont Statehouse since Gov. Peter Shumlin tapped him two years ago to sell his single-payer health care plan to legislators. The silver-haired 63-year-old roams the halls, haunts committee rooms and camps out in the cafeteria.

But these days, Nease is wearing a different hat.

Nearly four months after leaving his job last June as special assistant to the governor, he started a new one as director of communications and government relations for OneCare Vermont. That's the massive new health network anchored by the University of Vermont Medical Center and Dartmouth-Hitchcock that will provide care to a third of the state's Medicare beneficiaries.

"Government relations" typically means "lobbying." But like other former administration officials, Nease is prohibited by the Executive Code of Ethics from advocating for a private entity in front of the state for a year after leaving its employ. So he hasn't registered as a lobbyist and has avoided arm-twisting lawmakers.

"We have made clear to Floyd that it would not be appropriate for him to lobby the governor's office," says Shumlin spokesman Scott Coriell, adding that it's up to the legislature to decide whether to hear from Nease.

"I preface when I'm speaking with legislators by saying, 'You need to know: I can't lobby. You can ask me questions. I can put you in touch with people. My job is to be eyes and ears here,'" he says. "I'm pretty sure I haven't crossed any lines."

Maybe not. Nease, a former state representative and House majority leader, has a reputation for integrity. But he's become just the latest in a long line of former administration officials who've taken a swing through Montpelier's revolving door. And because the Executive Code of Ethics is essentially an honor code — with no enforcement mechanism for ex-employees — there's no way to ensure Nease is complying with it.

"That's exactly why we need an independent ethics commission," says Sen. Anthony Pollina (P/D-Washington). "People see Floyd. He's a nice guy. We're all friends. But people have questions ... Who do you ask? You ask me? I ask you? There's nobody to ask."

Pollina and Secretary of State Jim Condos came into the legislative session with high hopes that they could create such a commission — and a broader, enforceable code of ethics to go with it. For months, the Senate Committee on Government Operations has been laboring away at a comprehensive ethics-reform bill drafted by Pollina. Though Senate leadership extended its mid-session deadline, time is running short.

"If we can't do anything by the end of this week, I think it's dead," says Sen. Jeanette White (D-Windham), who chairs the committee. "We can't keep getting an extension over and over."

Gov Ops has already whittled down what was originally conceived as a five-member volunteer commission with a three-person staff that would investigate complaints against executive, legislative and municipal officials. Now the committee's eyeing just a half-time data-collection position with no enforcement powers — and it's excised municipalities altogether.

"There's no way we could set up a full commission this year — just no way," White says. "You're talking about $600,000 for something that a lot of people don't see as a serious issue."

Even if it skips the commission, the committee could still call on the executive and legislative branches to develop enforceable codes of ethics, applicable to various public servants and elected officials. The committee's working draft also includes several specific changes to the state's scattershot ethics rules.

For example, it would extend the one-year lobbying ban to ex-legislators — and it would prohibit state officers from contracting with campaign donors. The latter proposal was inspired by Attorney General Bill Sorrell, who drew legal scrutiny last year for filing suit against oil and gas companies at the behest of a Texas law firm that contributed to his reelection campaign. Sorrell later hired that firm to represent the state.

"If that's not illegal, then it should be," says Vermont Public Interest Research Group executive director Paul Burns, who supports the provision. "To most people, it has the appearance of corruption, even if it's not outright corruption."

The biggest sticking point in the bill, not surprisingly, is the matter of personal financial disclosure for lawmakers.

Committee members hope to require executive branch appointees and candidates for state office to disclose each source of income totaling $10,000 or more, the names of companies they control and major contracts they hold with the state.

But, says Sen. Joe Benning (R-Caledonia), who serves with White and Pollina on the committee, "We did not want to do something to outside parties that we were not willing to do ourselves."

The Vermont Constitution gives the Senate and House sole power to regulate their own members — so any new financial disclosures required of legislators would have to be enacted by rule change, not statute. Benning, who also serves on the Senate Rules Committee, says he hopes both Rules and Gov Ops can agree to disclosure guidelines that would work for all.

But the Rules Committee, which is dominated by the Senate's old guard, has shown far less interest in the matter. It has stalled for nearly a year in creating an internal ethics panel to govern its own members' behavior. A meeting in January to discuss financial disclosure proposals devolved into a shouting match when Sen. Phil Baruth (D-Chittenden), the majority leader, and Sen. John Campbell (D-Windsor), the Senate president pro tempore, appeared to question one another's motives and integrity.

Though his proposal is behind schedule and scaled back, Pollina expresses confidence that the legislature can still get some sort of ethics reform package over the finish line — and that would be enough for him.

"Given the fact that we've had nothing up until this point, it's still a step in the right direction," he says.

Consider it a shot across the bow from a group that — like the Democratic Governors Association — is likely to invest heavily in the race to replace Gov. Shumlin, who's retiring after a six-year run.

"We normally don't comment on political strategy, but I can say that the RGA sees the Vermont gubernatorial race as potentially very competitive this year," says RGA spokesman Jon Thompson. "After years of Vermont falling behind, voters are looking for a change, and we look forward to helping our nominee show how they would help make Vermont a stronger state."

Two years ago, the Democratic legislature and governor chose to double the amount individuals, PACs and corporations can give statewide candidates, from $2,000 a pop to $4,000. Now, for the first time, Vermont gubernatorial candidates are exploiting that change to raise big bucks from the wealthiest donors — in and out of state.

According to campaign finance reports released last week, Democratic candidates Matt Dunne and Sue Minter and Republican candidates Bruce Lisman and Phil Scott raised a collective $624,000 from those contributing more than $2,000 apiece. That's nearly 40 percent of the $1.6 million raised for the race thus far — all made possible by the Vermont legislature.

Neither figure, for what it's worth, includes the $454,000 Lisman personally contributed to his campaign. (Democrat Peter Galbraith joined the race Tuesday and did not report raising any money by last week's deadline.)

Those same four candidates raised $642,000 from out-of-state donors. Dunne was by far the worst offender, raising $343,000 — more than 60 percent of his total haul — from non-Vermonters. The former Google manager collected $117,000 from California alone, the vast majority from Silicon Valley.

But unlike his opponents, Scott raised a ton of money from corporate donors: $141,000, or more than a third of what he collected. And, as Seven Days reported earlier this week, he took part in a Washington, D.C., fundraiser Monday evening hosted by four lobbyists at a firm that represents big oil and tobacco interests.

So when the DGA and RGA start spending up a storm this fall, these four better not complain. They — and the Democratic legislature — won't have a leg to stand on.

Like their counterparts across the country, Vermont's Republican elected officials have been flummoxed by the rise of failed airline entrepreneur Donald Trump.

Branagan, who announced last week that she's running for the Vermont Senate, was one of 30 state legislators to publicly endorse Sen. Marco Rubio (R-Fla.) for president. She changed her mind after the Florida senator joined Trump in the gutter a month ago by questioning the size of his, um, hands.

No, she didn't — at least not in the Democratic primary. According to records from the town of Georgia, she pulled a Republican presidential ballot on Town Meeting Day.

"I was mainly joking when I said that," Branagan now says. "There have been a lot of mistakes in Digger lately. I mean, I did say that, but I meant it more as a joke."

That's not the impression political reporter Jasper Craven got, according to VTDigger founder and editor Anne Galloway.

Good question — and Branagan won't answer it, nor will she say who actually won her vote.

"I think people understand that who I vote for for president is my private business," she says. "Period."

Former Stowe Reporter publisher Maria Archangelo returned to Vermont from Philadelphia last April to serve as editor and copublisher of the Essex Reporter and Colchester Sun. Now she's going back — this time for a job as publisher and executive director of the Philadelphia Public School Notebook, a nonprofit news outlet focused on education.

Archangelo's husband, Tom Kearney, plans to remain executive editor of the Stowe Reporter and its sister papers. He'll telecommute, dividing his time between Vermont and Philly.

Replacing Archangelo at the top of the masthead at the Reporter and Sun will be Milton Independent editor Courtney Lamdin, who will serve as executive editor of all three Lynn family-owned papers.

The Burlington Free Press, meanwhile, is losing another staffer to state government. After nearly six years as the paper's digital editor — or "audience analyst," in Gannett Corporate Newspeak — Philip Tortora will start next week as communications director for the Department of Tourism and Marketing.

He'll join former Freeps reporter Haley Dover on the state payroll. She left the paper earlier this month to flack for the Agency of Education.