Fuggetaboutit? Experts brainstorm on the mechanics of memory 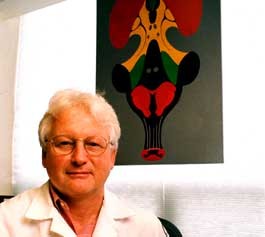 Pay attention! Those are marching orders in the battle to enhance and preserve memory, according to local experts in the field. The better your concentration, the greater the chances you’ll retain information over the long haul. In the incredible tale of brain cells struggling to survive in the cerebral cortex, the moral is: Gray matter really does matter.

But the same experts have differing views about what goes on in our pointy little heads as we age — which, of course, is every moment of our lives.

“We’re born with 20 billion cortical neurons,” says Dr. A. Kenneth Ciongoli, an associate professor of neurology at the University of Vermont’s medical school. “We get smarter for the first 25 years, then we sort of plateau between 25 and 30, followed by a slow deterioration from 30 to 65. After that, the deterioration speeds up. We lose 100,000 neurons a day after age 30.”

Ouch. Such a formula would indicate that, while many of you were reading this, approximately 100 of your neurons — a.k.a. nerve cells — went bye-bye forever. Or have they?

“That’s total, unmitigated nonsense,” contends Dr. William Pendlebury, medical director of the Memory Center at Fletcher Allen Health Care in Burlington. The facility evaluates and treats people with memory disorders. “There’s evidence we do not lose brain cells as we get older. We, in fact, convert large neurons to smaller-sized neurons. If you measure the total number of neurons over a lifetime, there’s no significant change. Science doesn’t yet know what the functional implication of that conversion is, and we don’t know if it diminishes the brain’s capacity for memory.”

Pendlebury acknowledges that “there is a loss of memory after about the age of 40 that continues, but it’s not significantly progressive and doesn’t really affect behavior.”

The shrinking versus disappearing debate aside, many people approaching middle age forget appointments or the names of acquaintances. And why is it that women of a certain age notice their minds simply going blank on a regular basis?

“Hormones,” suggests Dr. Lorilee Schoenbeck, a naturopathic physician who practices in Burlington, Shelburne and Middlebury. “With perimenopause, it’s typically an issue of poor short-term memory and verbal recall — ‘Where did I put those keys?’ They think they’re going crazy and need to be reassured they’re not.”

Perimenopause is the phase leading up to full-blown menopause, when the dreaded “change of life” depletes natural estrogen in the body. In addition to hot flashes, irregular or no periods and mood swings, estrogen-challenged women often experience frustrating memory problems.

Schoenbeck has co-authored Menopause: Bridging the Gap Between Natural and Conven-tional Medicine, a book due out in early June. One chapter is titled “Mental Health and Memory.”

“Estrogen increases blood flow to the brain,” Schoenbeck says. “It also supports communication between brain cells and promotes production of acetylcholine, a neurotransmitter needed for mental clarity and word retrieval.”

Hormone replacement therapy is controversial, but she points to foods and herbs with organic estrogen: soy, red clover, licorice, fennel and, to a lesser extent, black cohosh. Ginkgo biloba — for women and men — has no estrogen but is also believed to increase blood flow to the brain. “Studies in Germany showed that ginkgo was responsible for a 25 percent improvement in alertness and concentration,” Schoenbeck reports.

Reality check: In the time it’s taken to read the last eight paragraphs, anyone past Generation X has either bid farewell to about 300 more neurons or failed to notice the Alice in Wonderland-like sensation of brain cells growing smaller.

Members of the medical community agree that the key to good memory is the very thing you had so much trouble doing in high school. “Our degree of attentiveness has so much to do with how well we remember,” says Pendlebury. “You can’t overemphasize the importance of concentration and attention.”

In Schoenbeck’s opinion, that isn’t always so easy. “We live in a culture that sets us up for attention deficit disorder. Information’s coming at us all the time,” she notes, adding that meditation helps by serving as “one big concentration exercise.”

The under-40 crowd can be forgetful, too, of course. Ciongoli enumerates certain memory-impairing factors and conditions: depression, stress, trauma, hysteria, hypothyroidism, alcohol, brain tumors, diseases like Parkinson’s, Huntington’s or multiple sclerosis. “And frying your brain on drugs,” he adds. “Marijuana can cause early dementia. There are four famous cases of brain damage reported about 15 years ago in Lancet [a British medical magazine].”

So put down that cocktail or joint and pick up a cuppa java. Caffeine is one very memory-friendly substance. And if you sip coffee while doing a crossword puzzle, you are g-o-l-d-e-n. According to Ciongoli, studies indicate that “people who do crosswords have less dementia as they age.”

What’s an eight-letter word for someone with lots of neurons to spare? Brainiac — and those so blessed might offer a clue. In 1990, researchers began a study of more than 600 elderly Catholic nuns, priests and monks in several states. A positive disposition appeared to be a factor in living longer, and a lively mind helped lower the risk of Alzheimer’s, a degenerative disease of the central nervous system that causes increasing forgetfulness.

The study also scrutinized brief autobiographies written by nuns when they were young. Apparently, those who demonstrated “idea density” — many thoughts woven into a small number of words — were much more likely to resist the deterioration of memory in old age.

“Brain cells communicate with each other through connectivity we refer to as synapses, and learning stimulates synaptic growth,” Pendlebury explains.

Janis Peyser, a UVM clinical associate professor of psychology and psychiatry who is also a Memory Center consultant, says neurons chat “by sending out branches, called axons and dendrites. The more branches the neurons have, the more effectively and efficiently the brain works. A synapse is the point of contact between two neurons.”

A rigorous mind that plays with ideas is crucial to branch-building, which in turn fosters a good memory. “Continued intellectual and social activity is helpful throughout the life span,” Peyser says.

An aging person can lose some of those branches “but still have enough left for the brain to function well,” while Alzheimer’s disease and other dementias “result from changes and degeneration within the neurons themselves,” she notes.

Russell Ryder uses mathematics to keep his mind alert. Every day, he spends some time doubling random numbers in his head until he reaches four or five figures. After a mini-stroke last summer, the Essex Junction septuagenarian turned to Ciongoli for treatment. “He told me, ‘Use it or lose it.’ So, I came up with this stuff,” Ryder says.

“When you get to age 79, anything you do will make you sharper,” confides Ryder, who retired in 1987 from his job as a senior lab specialist after 25 years at IBM. “I also like to do a lot of thinking about weather and climate changes.”

Ciongoli is happy his patient has found a way to fight memory loss, stressing that even people with Alzheimer’s can flourish. “It’s not a death sentence,” he insists.

Yet Pendlebury and Ciongoli have contrary perspectives on the prevalence of that disease.

“Suddenly, the whole world has Alzheimer’s,” Ciongoli says wryly. “How did that happen? My feeling is that they’ve broadened the definition because the Food and Drug Administration will only approve medicines [for failing memory] if you have a diagnosis of Alzheimer’s.”

Alternately, he believes the statistical jump could be due to a very benign form of the disease that goes on, undetected, for years. “That doesn’t mean you’ll become a babbling idiot,” Ciongoli says. “Everyone needlessly worries.”

Pendlebury has a different take. “The reason for the increase in Alzheimer’s is that we are an aging population. In 1900, only 4 percent of people in the U.S. were over 65. The 2000 census showed that had become 13 percent. Ten percent of those people probably have memory disorders, and 70 percent of that is likely due to Alzheimer’s. That translates into about four million cases nationwide.”

In the late 1970s, hardening of the arteries and mini-strokes were blamed for most profound memory loss. “Many doctors thought it was an inevitable part of the aging process, but, with a better clinical approach to diagnosis, it turns out we were absolutely wrong,” Pendlebury says. “We were under-recognizing Alzheimer’s, which is a definable entity based on pathologic changes that occur in the brain.”

Whether a person is ancient or knee-high to a grasshopper, the strength of a memory is often dependent on the feelings or senses associated with the original experience. “Salt and pepper gets added to the mix,” suggests Pendlebury. “In the brain, our amygdala is what I think of as an emotional flavoring machine. A fight, for instance, will be more salient and easier to recall. Smell is another major component of memory. The olfactory input goes directly to the limbic system, which is the part of our brains most involved in memory. Within that, the most critical structure is called the hippocampus.”

Hippocampus is a Greek word for seahorse, which is the shape of that particular brain section. It is the place where incoming information goes once it passes through the gateway-like brainstem, a gigantic painting of which hangs on Pendlebury’s office wall.

“Then, the information is consolidated into short-term memory that can either be retained or forgotten,” he says. “The hippocampus makes decisions about what memories are important or not. It is also capable of retrieving information from long-term storage, mainly in the temporal and frontal lobes.”

The hippocampus is clearly to blame, therefore, when crucial facts and figures fail to make it into long-term storage. But don’t be too upset when it happens.

“An important and normal part of memory is forgetting,” Pendlebury points out. “You don’t want your brain clogged up with useless information.”

We are a cut above our pussycats, which have “excellent memories but cannot take learned experiences and use them to be creative,” Pendlebury says. “It’s our overdeveloped cerebral cortex that separates us from animals. Humans can take a lifetime of experiences and do something with it. Hopefully.”

When it comes to hope, Ciongoli looks to advances in stem-cell research as the best chance to find cures for a range of severe memory disorders. Pendlebury thinks the most promising avenue could be strategies to stop or eliminate amyloids, which are peptides — fragments of normal proteins — that accumulate excessively in the brains of Alzheimer’s patients. After encouraging experiments with mice, a California pharmaceutical company is conducting cutting-edge human clinical trials to foil amyloids.

Speaking of foil, aluminum was once the chief suspect of memory loss because it had been discovered in areas of the brain linked to Alzheimer’s. Everyone threw out their aluminum pots and pans. In the early and mid-1980s, Pendlebury and a former colleague did most of the research to figure out if exposure to the silvery metallic element — also an ingredient in deodorant, food, drink and medicines — was at fault. “The relationship between aluminum and Alzheimer’s has now been totally discarded,” he reports.

Behind him, the artsy brainstem seems to look down imperiously, as if to taunt the viewer: “There go another 2473 neurons.”

Quick — grab some caffeine and ginkgo biloba to recollect how your first 25 years were so foolishly squandered. As psychologist Janis Peyser likes to say, “memory is wasted on the young.”