Before Christiana and Barney Hodges created a pick-your-own apples operation at their Sunrise Orchards in Cornwall this year, they learned how to make doughnuts.

Acting on the advice of friends in the business, the couple converted part of their cider pressing area into a commercial kitchen so that they could offer an array of baked goods. Now, along with selling apples wholesale and pressing them for cider, Christiana is running advertisements for the farm in local media and answering visitors' questions about the apple varieties available on their 130 acres.

Pick-your-own operations are emerging as a valuable option for small orchardists who are competing in a market where apples are a big commodity. The same kind of economic forces that make it difficult to run a family dairy farm are pressing down on apple growers.

"It's very challenging to compete with farmers on the West Coast who plant apple blocks that measure in 10,000 acres," said Eric Boire, executive director of the Vermont Tree Fruit Growers Association. "The big have to get bigger to survive."

Vermont's apple industry has been declining for years. In 1997, the state had 3,700 acres of orchards; by 2017, the number was down to 1,700, according to the Agency of Agriculture, Food and Markets.

Vermont's larger operations enjoy some economies of scale that enable them to continue selling fruit wholesale; the smaller ones, which make up more than 80 percent of the state's orchards, have been struggling to find the packing and distribution channels they need. In recent years, many have started selling mainly to stores in Vermont.

Boire sees pick-your-own as one sign of a comeback.

"We have new growers entering every year because it's so popular," he said. Classes on starting an orchard have also become popular, Boire added.

The growing cider industry has become an important force in wholesale purchasing. The number of hard cider makers in Vermont has more than doubled since 2010, according to a 2020 report from the state ag agency. The cider companies provide an important in-state market for Vermont apples, but they pay much less than other fresh fruit buyers, according to the report. Terry Bradshaw, a professor and researcher at the University of Vermont who focuses on specialty crops such as apples and grapes, said cider makers generally pay $6 to $8 a bushel; pick-your-own operations that provide a fun experience, however, can get from $36 to $72 a bushel.

Vermont's apple industry remains a very large player in the state's agricultural economy. It follows only dairy and maple syrup in total annual crop value, according to the 2020 report.

Pick-your-own is a big part of that. Vermont growers produce about 1 million bushels of apples each year, according to the Vermont Tree Fruit Growers Association. About one-fifth of those are picked by consumers on fall outings.

During the first summer of the pandemic, Boire said, interest in apple picking surged. Many growers had their best season ever. Some reported that their sales had doubled; others closed early because they had sold out. 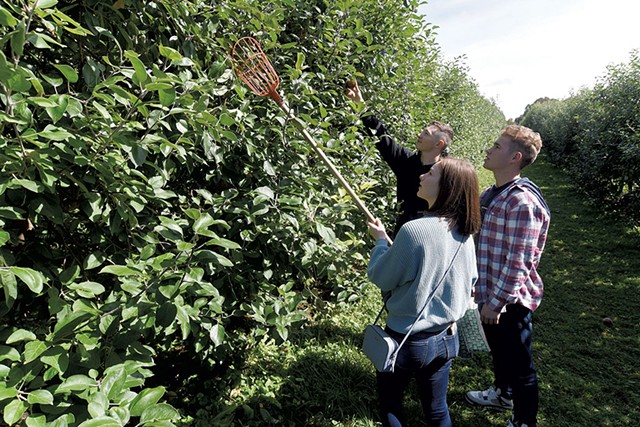 Greg Burrt has a popular pick-your-own operation on his 15 acres of apples in Cabot. His gross sales in 2020 were twice what they were the year before. He ran out of apples that October.

Boire and growers attribute the pick-your-own surge to the pandemic restrictions that steered people outdoors. This year is still busy, Burrt said, but not on the scale of 2020.

Pick-your-own operations also suit consumers who are interested in their food, said Kevin Lawyer, who owns orchards in Franklin and Swanton. He said he answers a lot of detailed questions about the trees and the fruit.

"I enjoy the conversations about how I do what I do," said Lawyer, who hosts a lot of school groups. "It's fun."

To stay competitive, Cornwall's 50-year-old Sunrise Orchards is always adapting and diversifying, Christiana said. Last year, the company gave up its wholesale contracts to sell fresh apples to Shaw's and Price Chopper. This year, it's signed an agreement to sell apples to Mott's, the applesauce maker.

For Christiana, learning to make doughnuts was the most challenging part of creating the new pick-your-own option. She sees pick-your-own as an important piece of the overall picture, not only financially but also because she, too, enjoys answering people's questions about the orchard.

"It's a piece of our business that was missing," she said. "I've enjoyed connecting with our closer community. I'm meeting neighbors I hadn't met before."

In Lawyer's opinion, the doughnuts are as important as the apples. The Canadian border shutdown has cut into his visitor numbers, but traffic is still brisk, especially at his Franklin orchard. He's noticed that visitors tend to buy fewer apples than in past years and more baked goods.

"Pick-your-own is the quickest and easiest way to make money," Lawyer said.