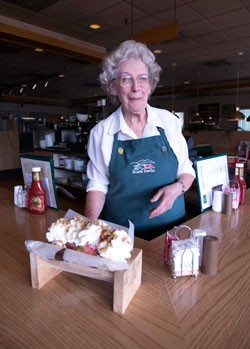 When 92-year-old Olive Smith passed away on June 22, her obituary in the Rutland Herald featured an unusual plug for a local business: “There will be no calling hours, but the family knows Olive would be pleased if folks went to Seward’s Dairy Bar and had something to eat.”

These days, Seward’s Dairy Bar is called Seward Family Restaurant. But for many Rutland natives — including Smith, who could regularly be found there solving crossword puzzles before her death — the 65-year-old restaurant has a lifetime’s worth of associations. And for June Hier, who began serving at Seward’s 64 years ago and still works there, the passing of her original customers marks the end of an era. Smith was the last of them.

Roland Q. Seward opened the Seward Dairy at 224 North Main Street in 1947. Much like the food hubs and venture centers of today, Seward’s plant was a state-of-the-art facility that processed milk from small local dairies. Some milk, such as that from Proctor Creamery, was packed and sold in the farm’s own cartons and bottles. Seward bought the rest and used it in homemade cheddar, cottage cheese and ice cream — which he sold at Seward’s Dairy Bar.

The year the business opened, 15-year-old June Hier thought she might be able to earn extra pocket money by scooping homemade ice cream there during her summer break. “They turned me down flat,” remembers the 80-year-old. “I said, ‘Phooey on them! I’ll never go to eat there or anything!’”

But the following summer, Hier found herself coveting a blue carriage coat she’d seen in the window of a downtown store, so she applied once again at Seward’s. This time, the manager judged the rising high school senior old enough to work the job’s late hours. The rest is local history.

Hier hasn’t missed a beat in time’s march through Seward’s. She was there through the expansion of the 1960s and ’70s, when the Sewards opened Dairy Bars in Glens Falls, N.Y., and in Ludlow, Essex, Burlington and South Burlington in Vermont. She worked through the end of that golden age, as Roland Q. Seward slowly closed all but the original Rutland location. And Hier learned the new floor plan when the Dairy Bar became the much larger Seward Family Restaurant in 1986. Seward himself never got to see the change. He passed away a year before his longtime dream of full-service dining was realized. The restaurant is now owned and operated by his son, Tom Seward, and Tom’s wife, Karen, who says she goes by the title of restaurant “mother.”

Hier says the food itself hasn’t changed much. It’s a subject she knows intimately — she serves it every Tuesday, Thursday and Saturday, from 4 p.m. until closing at around 9 p.m. “It’s a type of food that’s home-like food. They call it a ‘family restaurant’ for a reason,” she explains. “You get your macaroni and cheese or your hot dogs and homemade mashed potatoes and gravy.”

When Karen Seward asks her if she can recall all the different varieties of gravy, Hier begins by throwing her head back and exclaiming, “Oh, boy!” Sharp as a tack, or at least a particularly crispy sugar cone, the waitress reels off all five homemade varieties, including beef, chicken, turkey, pork and special pot-roast gravy.

Most of the time, two cooks are on duty in the labyrinthine, semiopen kitchen that lies just feet from the restaurant’s old-fashioned, horseshoe-shaped counter and comfy padded booths. That number doesn’t include Tom and Karen Seward, who make the gravies, soups and many daily specials themselves to keep the flavors in the family.

Neither Seward had ever cooked outside the home when they moved from the dairy side of the business to the restaurant in 1998. That was the year Seward’s ceased its milk-plant operations — and stopped making its own ice cream. In a cycle of business that suggests “The Old Lady Who Swallowed a Fly,” West Lynn Creamery in Massachusetts purchased Seward’s dairy business. Soon after, West Lynn sold out to Garelick Farms, which was in turn purchased by Dean Foods. “It was economy of scale,” says Karen Seward, whose husband was not available for comment.

Though the cream is no longer local, Karen Seward says the Perry’s scoops are strikingly similar in texture and quality to the original Seward’s product. “If our customer base was disappointed, we would have certainly found other ice cream that was comparable to what we were making,” she adds.

Apparently there haven’t been many complaints. A wide selection helps; Seward’s now has about 50 rotating flavors, compared with a peak of 30 when the dairy was making its own desserts. Current flavors include spiced pumpkin; a bright-yellow, cake-flavored ice cream with chocolate frosting swirls and pound-cake pieces; and White Lightning, a concoction of dark chocolate with streaks of mint-flavored white fudge.

And the special ice cream creations haven’t gone anywhere. Seward’s old-timers remember the Awful Awful, a 24-ounce milkshake made from creemee mix. It’s still on the menu under the less distinctive name of Super Milk Shake, with the slogan “awful awesome.” The classic Awful Awful recipe, says Karen Seward, came from a company that sold specially labeled cups and supplies to stores throughout New England. When Rhode Island-based Newport Creamery purchased that small business, it took rights to the name.

One thing that hasn’t changed at Seward’s is the Pig’s Dinner. The most expensive dish on the dessert menu by several dollars, it’s a troughful of ice cream. Literally. The extra-large banana split, with four scoops, four toppings and a whole banana, is served in a miniature trough. “How does Mommy’s little piggy eat?” At Seward’s.

The Pig’s Dinner is as much a Seward’s standard as the Cabot cheddar macaroni and cheese, the meatloaf or the burger. The last one harks back to the Dairy Bar’s snack-bar incarnation, which Seward compares to the midcentury diner on TV’s “Happy Days.”

Today, cooks form the patties daily and never press them when cooking. The result is extraordinarily juicy and slightly crumbly, but not greasy. Griddling the bun adds crunch and keeps the dough from absorbing messy juices. Inside, there’s mild Cabot cheddar, “special sauce” and bright lettuce and tomato. It’s nothing fancy or out of the ordinary, just a basic, well-made cheeseburger with sides of creamy, poppy-seed-speckled coleslaw and crispy steak fries. Make that “freedom fries” — Seward’s hasn’t abandoned the post-9/11 menu change.

From the $4.05 “fish on a bun” to the $6.75 hot beef with barbecue sauce, Hier knows all the dishes — but won’t name favorites. “It all looks wonderful, and we’re happy and proud to serve it,” she says diplomatically.

As for Karen Seward, she’s proudest of the Lemon Luscious pie that she prepares herself. The tall slice looks like a slab of sunshine plated with a dense whipped-cream cloud cover. Seward’s sweet homemade shortbread crust holds a thin layer of cream cheese, covered in turn with more-sweet-than-tart lemon custard. She says it’s among the restaurant’s most popular pies, along with chocolate, coconut and banana cream.

Seward is a relative newcomer, having worked in the business since she married Tom in 1991. Hier holds the title of longest-tenured employee — but not the oldest. That’s Beverly Loso, who is a month older than Hier and has “only been [at Seward’s] 20 years,” according to the younger waitress. Rivaling Hier’s run is Sarah Belcher, who has been the business’ full-time bookkeeper for the past 50 years. Hier remembers Belcher coming into the dairy with her milkman father well before that.

Hier, who lives nearby with her husband of 62 years and teenaged granddaughter, doesn’t foresee quitting anytime soon. “I’ll stay until I’ve accomplished my 65th year, then wing it after that,” she says with a toothy grin. “I don’t have plans to retire, but my legs are not what they used to be. At the end of the night, they feel just like wooden stumps. It’s not conducive to fast waitressing.”

Whatever Hier’s speed, Seward says she wants to keep her around the restaurant as long as she’ll stay. “She’s been an inspiration to many, many a woman at Seward’s that working keeps your mind alert and keeps you thinking young,” Seward says.

And perhaps Hier’s enthusiasm is helping to keep Seward’s quick on its feet. Though she says senior citizens are the most reliable dinner customers, young families come in at all hours for food, ice cream and a taste of history. As Hier speaks, young children play nearby on a train covered with papier-mâché ice cream — a new generation of potential regulars replacing Olive Smith’s old guard.