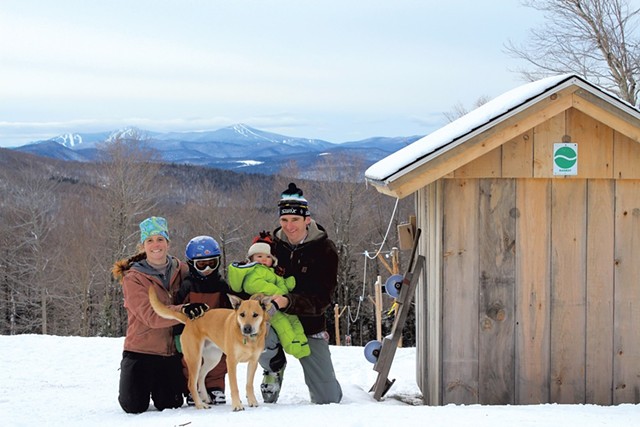 Many Vermonters live fairly close to a mountain where they can spend the day on the slopes. But the McCuskers' skiing commute makes even a 20-minute drive seem like a slog.

The family turned a hill in their Bethel front yard into a 325-foot ski slope. A motorized rope pulls skiers to the top of the hill.

In classic Vermont style, the family used many repurposed and locally sourced materials. The rope tow's engine came from Kricket's grandfather's riding lawn mower. The tow components include two old tires and 10-foot-tall towers made from hardwood trees harvested on the McCuskers' property. On each tower, old wheelbarrow wheels hold the rope in place.

The couple built a shed to house the engine and purchased five-eighths-inch rope — known as poly-dac — online. Friends helped with the construction, including welding the electrical components. Several outdoor LED floodlights keep the fun going into the evening. "With the days being so short, and the kids are anxious to get outside, it helps to have those lights," says Angus.

The McCuskers make sure their young sons are in on the action: 3-year-old Galen is already skiing the hill, while 1-year-old Elet toddles around outside, following his big brother. The family frequently hosts skiing and sledding gatherings, like Galen's recent birthday party. They keep the hill groomed using an old snowmobile fitted with a drag-behind grooming attachment.

What was the inspiration for the rope-tow slope? Angus, who travels frequently as a mapper for the State of Vermont, would periodically see — and covet — residential rope tows. "Back in the day, every town had a community rope tow," says Angus. While it's not as commonplace today, Angus says he knows of families all around the state who have their own private hills. "There are seven backyard rope tows in our county alone," he says. 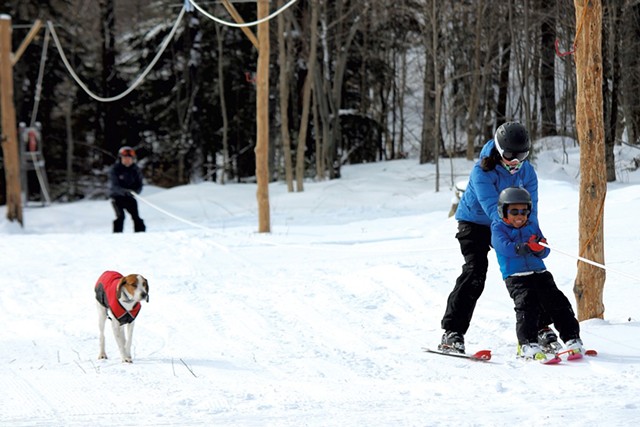 Building a rope tow takes some mechanical and electrical know-how, plus either a diesel engine or electricity hookup. To learn how, Angus visited a private slope and took notes. But he says there are also plenty of YouTube tutorials. Rope is required, and, while not essential, towers are helpful to keep the rope off the ground. Angus McCusker initially used standard braided yellow nylon rope, but it would easily slide off the wheelbarrow wheels. So this winter he replaced it with the specialty poly-dac rope purchased online at New England Ropes. He paid $350 for 1,200 feet; he only needed 650 feet, so he sold the rest to a friend who is also building a family rope tow.