From the Publisher: Warning Bells 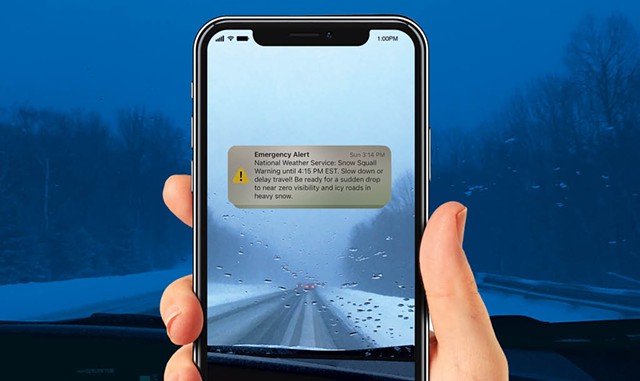 The first snow squall alarm sounded on my cellphone — and my partner's — around 3:15 p.m. on Sunday, warning of an impending whiteout that blew in over Lake Champlain a few minutes later.

Fine, I said to myself, as the house was engulfed from every direction, like a snow globe being shaken by an angry child; we weren't planning to hit the road until 4. Dinner in Braintree had been on the calendar for a while, and I'd rearranged my weekend work to be able to go. The invite was for 5:30.

The skies started to clear, and we thought the "emergency" was over, when our phones started buzzing again — in sync. The snow squall warning had been extended until 4:15, which is precisely when we managed to leave the house with a freshly baked cake.

The drive south on Interstate 89 began with a debate about the pros and cons of these Wireless Emergency Alerts, a well-meaning but intrusive technology that targets phones in a geographical area. Heretofore, they'd been used sparingly to share flash flood warnings and Amber Alerts about missing children. The alarm is, well, alarming — especially when a roomful of people is receiving it on multiple phones at the same time, or in a small car when two phones start blaring.

Raised in snow-fearing Maryland, I see the logic of the texts and suggested that maybe it would have been wise to cancel our dinner plans. My New England-born partner lamented that winter is now a crisis. Plus, the people for whom a snow squall could be life-threatening — drivers — are not supposed to be looking at their phones. Is it worth that risk to be informed of another?

Our car was starting to heat up when we hit snow in Richmond, and there we joined a long line of windshield-wiping, red-light-flashing vehicles crawling south in the right-hand lane. Our phones exploded at least two more times between exits 11 and 4 with snow squall alerts, as the danger time got pushed later and later — right up to 5:30.

Another text — from the Vermont State Police — warned of a bad accident between exits 5 and 6. By the time we got there, an hour and a half later, all the cars had been cleared away.

We were driving in the snow squall. Anxious, unsure whether it would get better or worse, and arguing with my companion about the usefulness of knowing what might lie ahead, I thought: This is just like the pandemic.

You think it will never end — until, almost two years later, a cloud lifts.

Once in Randolph, the going got easier. We followed detailed directions to find the place and enjoyed a mask-free dinner, at which the plague was but a sidenote — not the center of conversation. It was delightful to meet new, interesting people at the end of a dark road in rural Vermont.

The weather cooperated on the return trip, and the fresh snow glowed. Back to black, the ribbon of Vermont highway led us home, to warmth and safety. That's a comfort worth appreciating after a harrowing winter drive — and as, halfway around the world, Russian aggression in Ukraine has turned more than 500,000 of its citizens into refugees.

On Monday night as I wrote this, it was snowing lightly in Kyiv with a temp of 32. The capital city was bracing for the kind of storm that doesn't lend itself to prediction.