From the Publisher: The Write Stuff 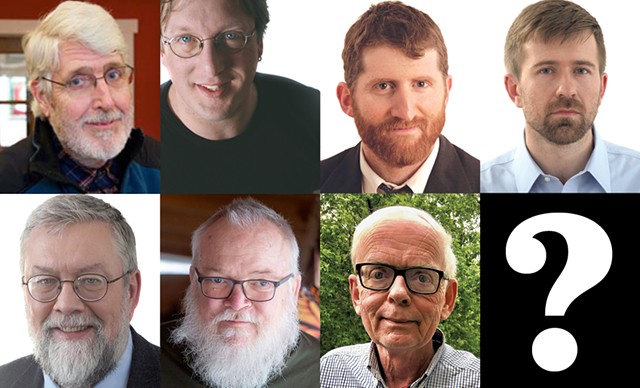 Seven Days is seeking a columnist who can help our readers make sense of the news. The right writer should have the institutional memory, wisdom and insight of a seasoned journalist who has covered Vermont for a while, combined with the energy and drive of a rookie reporter. She/he/they will be sufficiently motivated to lay in wait for lawmakers in the halls of the Statehouse, stay up late to cover meetings and elections, and take important phone calls at all times of the day and night. Faced with an enormous number of potential stories, the next "Fair Game" columnist will spot the ones that really matter and advance them in ways that are still surprising by the time the paper comes out on Wednesday.

The successful candidate will artfully string together 1,600 carefully chosen, fact-checked words that Seven Days readers will clamor to read — then get up and do it again, issue after issue.

Sound impossible? We're starting to think it might be.

The originator of Seven Days' political column, Peter Freyne, produced it weekly for 12 years. Then called "Inside Track," Freyne's Wednesday takedown was required reading in Vermont. It was fun — although not for the people he wrote about — and accessible, with nicknames and jokes. He was first on a lot of big stories, too. When the internet made breaking news in print more difficult, Freyne learned to blog, occasionally scooping himself by reporting online what he once would have held for the column.

Since Freyne's last "Track" in 2008, the column has changed hands six times. His immediate successor, Shay Totten, switched the name to "Fair Game" and did the job for three and a half years. After mastering the art of digital distribution, Totten handed the column off to Andy Bromage, who ably served until we hired Paul Heintz, a former communications guy for U.S. Rep. Peter Welch. Heintz knew the territory. He raised the reporting bar and embraced "Fair Game" — until he didn't.

In late 2016 came John Walters. We found him, actually, writing a self-published blog, the Vermont Political Observer, in his basement. "I was the fifth occupant of what I liked to call the Peter Freyne Chair of Instigative Journalism," Walters wrote of his hiring shortly after we'd parted ways, in August 2019. He observed, correctly, that the column had evolved and the newspaper around it had become a more serious enterprise. Walters noted that Freyne "had free rein to do stuff that would get a writer shitcanned today."

Walters' analysis continued: "I think they were looking for a combination of my journalistic background with the humor, snark and edge of this here blog," he explained on VPO. "In practice, this was an extremely delicate balancing act. Perhaps impossible."

Thinking that Walters might be right, we put "Fair Game" on ice for more than a year. But even in the midst of the pandemic, we never stopped wanting a weekly column that could help our readers navigate and understand the news — nor looking for a person to write it.

Late in 2020, we found one. Dave Gram had just been fired from his talk-radio show on WDEV, he said, for being too critical of then-president Donald Trump. A print journalist, aka a skilled wordsmith, he had decades of experience covering Vermont for the Associated Press. Gram is also funny, kind and well read — a natural dot connector. He jumped at the chance to resurrect the column and, on January 13, came out swinging with one that exposed how the riot at the U.S. Capitol a week prior had widened rifts in Vermont's GOP.

Five months later, Gram had to step down due to health issues. By then, Mark Johnson — another longtime observer of Vermont news and politics — had become available. He plunged in and produced 14 columns before concluding that the job was too time-consuming and stressful. Definitely not a part-time gig, as he had hoped.

Although Johnson's departure took us by surprise, it probably shouldn't have. Every Seven Days political columnist since Freyne has struggled to make the job manageable.

And every one has been a white man, as competing media outlets love to point out. Not all of them have been "old," or straight, but they've definitely been white dudes. We came close to hiring a woman once. But after writing a sample column, she dropped out. She, too, was a veteran of Vermont politics with a deep background in journalism — a prerequisite for this job. Sadly, not many women fit that description. Two who do — former daily reporters Diane Derby and Candy Page — have already said no.

Since Johnson's announcement, we've heard a lot of suggestions for what "Fair Game" should be and who could write it. As long as the result serves readers, with fresh, fully vetted insights, we're all ears.