From the Publisher: Tech Tonic 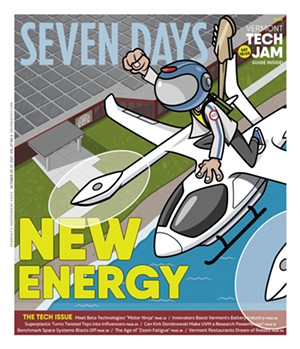 "Where are all the workers?"

Employers in all sectors across Vermont are asking that question as they struggle to hire people during this pandemic period dubbed "the Great Resignation."

Back in 2008, the labor shortage was more specific: Local tech companies claimed they couldn't find enough talent to grow their businesses here. They watched as college graduates left Vermont, lured by the computer glow of distant cities. The state's economic development office went so far as to host recruitment parties in Boston to reverse the "brain drain."

At Seven Days, we started getting job ads from companies that generally like to stay under the radar; they're not seeking local publicity. We asked ourselves: Do Vermont residents — especially young ones — even know that their state is home to cutting-edge enterprises working in biotech, robotics, renewable energy, software development and precision manufacturing? Not just big-name businesses, like GlobalFoundries and GE Healthcare, but smaller innovators, too, such as Greensea and Creative MicroSystems. Some fascinating companies you've probably never heard of are quietly solving big problems in little Vermont.

So we helped create a tech expo and career fair to showcase them. The Vermont Tech Jam collects some of the state's most innovative employers in one place to facilitate connections between recruiters, job seekers and students — in our own backyard.

Finding the right spot for the event has been a challenge: Over the past 13 years, the Jam has happened at Main Street Landing, Champlain College, the former Sheraton, the Champlain Mill, Memorial Auditorium and the Champlain Valley Exposition. In 2011, we snagged the empty storefront recently vacated by a Borders bookstore on Church Street for a pop-up iteration; the space is now home to a CVS.

In retrospect, though, we were always waiting for a venue like Hula. Four years ago, it was an oven factory. Now the Burlington lakeside campus is a gleaming, energy-efficient tech hub hosting entrepreneurial activity of all shapes and sizes. No space better illustrates the forces of industry, imagination, investment and renewal, which makes it the perfect setting for our mostly annual event. (There were two Tech Jams in 2008. Last year, for obvious reasons, we skipped it.)

At the last Jam, in October 2019, a rep from Beta Technologies explained the efforts of its engineers to build an all-electric aircraft at Burlington International Airport. He also dropped the name of the company's first paying customer: Martine Rothblatt, founder of Sirius Satellite Radio, transgender activist, pilot and CEO of United Therapeutics, a company that aims to manufacture and transport human organs for transplant.

From that moment, we've been trying to get Rothblatt, who has a home in Lincoln, to the Jam. Score! In the final hours of the Vermont Tech Jam on Saturday, October 23, Seven Days reporter Chelsea Edgar will interview Rothblatt and Beta founder Kyle Clark live at Hula.

It might seem odd that a newspaper is in the expo business; in 2019, Seven Days won an economic development award for producing this event. The truth is: Organizing the Tech Jam leads us to stories that we otherwise wouldn't find. The proof is in this week's issue. Our reporters sought out the most interesting tech tales in Vermont, including five local companies trying to make better batteries — a prerequisite for storing renewable energy. Other takeaways: One of Beta's best engineers is a woman who survived a mass shooting in Montréal; maneuvering satellites through space is easier because of a Burlington invention; for Vermont restaurants, some gadgets are here to stay; and serial entrepreneur Paul Budnitz just got $20 million for his latest animation effort.

Read all about it in this week's paper. And, to learn more about Vermont's tech sector, come Saturday to discover it yourself. Don't forget to bring your résumé. And a mask. You'll find loads of potential employers — exhibitor space is sold out — represented by workers who, in some cases, found their dream job right here.

From the Publisher Tech Issue