From the Publisher: Summer, Uncovered 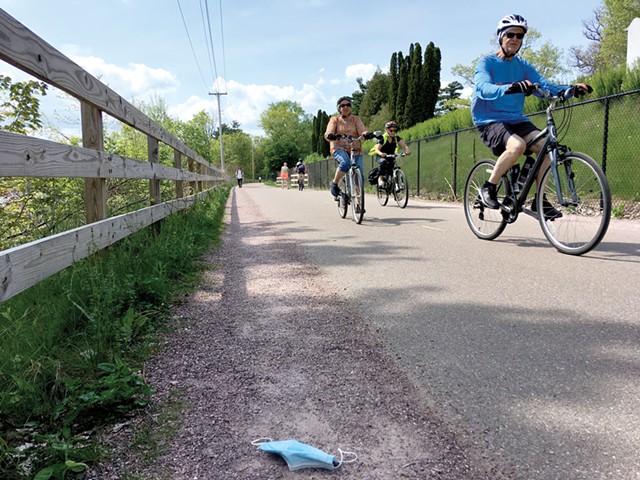 My backyard looks down on the Burlington bike path — a stretch I walk almost every day. It takes about 45 minutes to stroll from my house on Lakeview Terrace up North Avenue, past the high school and back along the waterfront via the sailing center, skatepark and Depot Street. Throughout the pandemic, this ritual has given me regular glimpses of the outside world. I've witnessed the slow-motion demolition of the Moran Plant and the rapid transformation of the North Beach campground into a pop-up, COVID-19-safe homeless shelter.

Mostly, though, I've observed people: fellow walkers, bikers and joggers with whom I've shared the path — or tried to. For most of the pandemic, I've gone mask-less when exercising alone outdoors, moving into the street or onto the grass to stay six feet away from everyone I encounter. That guidance came from Vermont Health Commissioner Dr. Mark Levine, whom I interviewed for Seven Days last summer. I heard him say as much in press conferences, too. No need to wear a mask if you're alone outside — or driving solo. The data have borne this out. Just last week, the New York Times reported: "There is not a single documented Covid infection anywhere in the world from casual outdoor interactions, such as walking past someone on a street or eating at a nearby table."

Of course, "casual outdoor interactions," such as passing someone on the bike path, don't lend themselves to long explanations about epidemiology. Over the months on my walking route, I've gotten some dirty looks. No words or blows, but definitely scowls that were visible under facial coverings.

That's one reason I rejoiced last Friday, when I learned the Centers for Disease Control and Prevention had announced that vaccinated people would no longer have to wear masks indoors or out. I didn't even bring one downtown, where a group of Seven Dayzers gathered for a celebratory survival lunch at Leunig's Bistro & Café — the first in-person meeting of our leadership team in more than a year.

Reality was restored when the host informed me that the restaurant had not yet changed its protocols and gave me a mask to wear on the way to the table. Walking home, too, I noticed almost everybody on Church Street — except a few rogue dads — was still covered up.

The relaxation of rules is confusing in a state that has strictly followed them and boasts one of the highest vaccination rates in the country. Plenty of young people, including many in the service industry, aren't yet two weeks past their final shot; others haven't even started the process. As long as there's no way to verify inoculation status, unmasked and unvaccinated customers pose a potential risk to those folks.

On Monday night, a majority of the Burlington City Council voted to maintain the mask mandate in Queen City stores and municipal buildings until June 7, against the expressed wishes of Mayor Miro Weinberger.

Maybe, for pandemic-hardened Vermonters, the updated CDC guidelines are just too good to be true.

Things are less fraught on the bike path. By Tuesday afternoon, it seemed most people were exercising the "new" freedom they had never really lost. I noticed many more mask-less people on the asphalt trail — and also something I haven't seen in a very long time: smiling faces.