From the Publisher: Series Finale 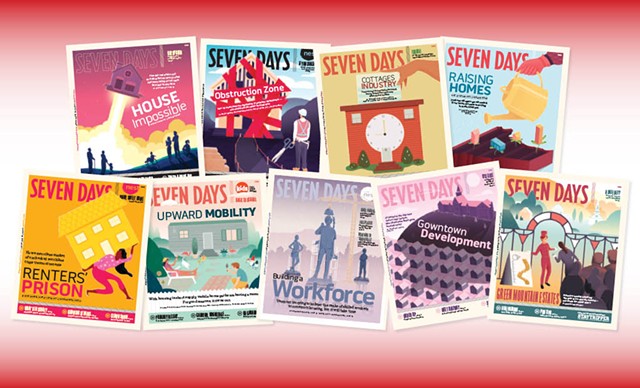 This week's cover story, "Green Mountain Estates," is the last in our yearlong "Locked Out" series exploring Vermont's housing crisis. In 12 long-form stories, Seven Days reporters have searched for answers to a pressing question that imperils the state's economy: Why is it so difficult to find a place to live here?

Those impacted include workers who would happily move to Vermont if they had somewhere to hang their hats — a huge obstacle for businesses, including Seven Days, looking to staff up in the wake of the pandemic.

The influx of out-of-staters buying properties for top dollar is one reason for the real estate crunch. But there are many more contributing factors: exclusionary zoning, the proliferation of short-term rentals, inadequate municipal infrastructure, not-in-my-backyard attitudes and a lack of local tradespeople to do construction work, to name a few. We knew it would take more than a single story to illustrate and explain the complexity of the situation. The challenge was to do it without putting readers to sleep.

News editor Matthew Roy got a crash course on the topic when he researched and wrote the kickoff piece, published on March 9. His story was a great road map for readers. The reporting experience also helped him see the issues and shape the series, including which stories to pursue.

Following his direction, our news reporters illustrated every angle by talking with real people: individuals desperately looking for homes, landlords and tenants, mobile home park residents, seniors who would downsize and relocate if they had somewhere to go, frustrated developers, employers forced into the real estate business to provide homes for their staff. They did the legwork to ensure that each story was a compelling read.

They succeeded, according to letter writers like Greg Wallace of Plainfield. "I've been reading Seven Days for a couple of decades now, and I have to say 'Upward Mobility' [August 17] is one of the very best stories I've seen," he wrote in September. "The writing and the photographs were a fantastic humanistic portrayal of some people living in the trailer parks ... The article was handled in a documentary-style way that focused on the people, their lives and their challenges, all without undue editorializing, overexplanation or academic frameworks — and with great respect."

It was easy for our writers and editors to empathize with their subjects — the housing crisis has touched nearly all of them personally. Roy, for example, started looking for a house in Burlington when he moved here, in 2014. He and his wife rented for six years — and looked at countless places — before finally closing on a house in Burlington's Old North End. During the course of the "Locked Out" series, two of our hardworking news reporters, who are a couple, were outbid on 11 condos before they finally scored a place two weeks ago. Many Seven Days employees pay exorbitant rents — way more than a third of what they earn.

In "Green Mountain Estates," Derek Brouwer considers how these trends, if unchecked, could turn Vermont into an exclusive playground for old, affluent white people.

Will a year of ambitious, in-depth reporting make a difference? That would be heartening. Not since Seven Days' 2019 "Hooked" series — exploring the complexities of Vermont's opioid crisis — have we dedicated so much editorial firepower to a single subject. Several tax-deductible donations of $2,000 or more that we received through our fiscal sponsor, Journalism Funding Partners, helped make it possible. Donors paid for some of our reporting and editing costs, as well as custom illustrations, photography and travel.

We know that lawmakers are paying attention to our work: Elected officials referenced stories in our "Locked Out" series numerous times during the legislative session — including on the floor of Senate. The series came up repeatedly at last month's Vermont Statewide Housing Conference, organized by the Vermont Housing Finance Agency, according to two Seven Days reporters who attended. Another participant, Chris Cochran, the state's director of community planning and revitalization, credited the series for elevating conversations about local land use and zoning, now hot topics among policy makers and community leaders. "This series made me and many others believe the impossible was possible," Cochran wrote in an email.

The "Locked Out" project may be over, but now that we've explored some of the problems, we'll be watching closely and reporting on the solutions we hope will follow.

1. House Impossible: How the Real Estate Rush and Other Factors Have Pushed Homeownership Out of Reach for Many Vermonters (March 9)

5. Gowntown Development: UVM Wants to Build Dorms on Its Trinity Campus. Would That Ease Burlington's Housing Crisis? (May 25)

6. Raising Homes: It Takes a Village to Grow Housing. How Vermont Towns Are Trying to Make It Happen. (June 15)

8. Upward Mobility: With Housing in Short Supply, Mobile Home Parks Are Having a Moment (August 17)

9. Building a Workforce: Vermont Is Trying to Bolster the Ranks of Skilled Workers to Construct Housing, but It Will Take Time (October 12)

12. Green Mountain Estates: Expensive Housing Is Limiting Who Gets to Live Where in Vermont — and Clouds the State's Future (December 7)