From the Publisher: Pressed for Time

Before the "China virus," as the current president calls it, we had the "Spanish flu" — named for the only place in the world where journalists openly recorded its toll. So explained John M. Barry, author of The Great Influenza, on a recent episode of NPR's "On the Media." Countries still involved in World War I discouraged news coverage of the 1918 pandemic that killed 50 million people across the globe.

The U.S. went along with the media blackout. The government was promoting patriotism, and the 1918 Sedition Act outlawed publishing "disloyal, profane, scurrilous, or abusive language" that might reflect negatively upon the country. Even the U.S. Postal Service was in on the censorship, monitoring mailed newspapers that did not conform. As a result, there was scant coverage of the influenza virus that ended the lives of 675,000 Americans.* Most of them were under age 45.

Despite contracting the disease, president Woodrow Wilson never spoke publicly of it. A New York Times story published on May 14 of this year asked, "Why Are There Almost No Memorials to the Flu of 1918?" (The reporter found a rare exception in Barre's Hope Cemetery: a marble bench, erected two years ago to commemorate the historic scourge and the 100th anniversary of the Wayside restaurant.) Mention of the deadly pandemic was also rare in literature and other art of the time. 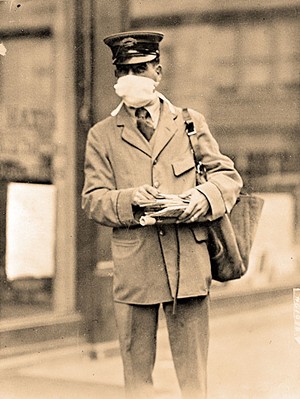 Referencing scholars, the Times article suggested that "The mass amnesia helps explain the lack of preparation for the Covid-19 crisis."

Vermonters won't soon forget this global pandemic. From the start, every local media outlet has been on the story, availing themselves of the governor's twice-weekly press conferences to question the state's leaders in public health, safety and government. While the officials share a podium in an actual auditorium, most of the journalists call in, often on hard-to-hear phone lines. Chroniclers of all platforms and persuasions, they are exercising the rights of a free press to inform the public and uphold local democracy.

And, not surprisingly, the "briefings" are anything but. One lasted two and a half hours.

Rebecca Kelley, the governor's communications director, has started to intervene around the 90-minute mark, noting how many reporters have yet to speak and suggesting they ask no more than two questions each. Her emails are more pointed. In advance of last Tuesday's briefing, for which 26 reporters had signed up, she suggested participants listen to the whole press conference — so they wouldn't repeat a question that had already been asked — and issued a warning: "If we continue to have to cut short those reporters at the end of the queue, we're going to have to reconsider the format to ensure more equal time is given across outlets."

The system is not perfect. On the Friday after Thanksgiving, Steve Merrill of the public access station NEK-TV called in with a dog yapping in the background — "a Jack Russell puppy," he told an inquiring Gov. Phil Scott. "They bark for affirmation." Merrill yelled at the dog to "shut up" as Health Commissioner Dr. Mark Levine was getting ready to answer Merrill's question about mortality rates. Removing his mask, Levine cracked a big, ill-timed smile.

At another press briefing, everyone could hear U.S. Rep. Peter Welch (D-Vt.) ordering a turkey sandwich for lunch — an unmuted moment the Islander's Mike Donoghue graciously referred to as "interference."

Still, the end result — useful, accurate information — is a vast improvement over what passed for health reporting 100 years ago. If people take it to heart, that knowledge will save lives.


*Correction: An earlier version of this story misstated the percentage of the U.S. population that died of the Spanish flu.