From the Publisher: Party On

Every year — for the last 26 — the people who make Seven Days newspaper have posed for a photo to celebrate our birthday: September 6, 1995. The shoot usually happens on a weekday and requires everyone to leave the office and convene somewhere else: on a ferry, in a bowling alley, at a miniature golf course. Our late staff photographer, Matt Thorsen, famously tied himself into knots directing us from the top of a ladder, setting the camera's timer and then dashing down to get himself into the picture. Difficult as they are to wrangle, the images document the paper's growth and personnel changes over time. Our loyal and talented crew includes half a dozen 20-plus-year veterans. Another 10 or so people have been with Seven Days for more than a decade.

This year's birthday photo, shot in my backyard on a Saturday evening by James Buck, is especially meaningful — and historic. Front and center is Pamela Polston, who cofounded Seven Days with me in a windowless basement office in Miller's Landmark on Burlington's Church Street more than a quarter century ago. The day before the picture was taken, Friday, August 27, was her last as coeditor and associate publisher. She's transitioning from directing the paper's significant arts and culture coverage to a less demanding role, writing and compiling our visual art section, which includes gallery listings and reviews — oh, and this week's South End Art Hop supplement.

The photo shoot doubled as an outdoor gathering to recognize all that Pamela has done for the company, including passing the culture torch to Dan Bolles and Elizabeth M. Seyler.

Pamela and I never intended to become newspaper publishers. We were a couple arts editors who thought Vermont deserved a great alternative weekly and generally agreed on how it should read and look. We didn't see eye to eye on everything, but we never let each other down. The word "reliable" doesn't begin to capture Pamela's round-the-clock work ethic. For example, two weeks ago I emailed her my publisher's note — sometime before midnight — looking for a second edit. She turned it around quickly, fixed the grammatical errors and, with minimal feedback, assured me it was OK. I count on that good judgment, as does everyone else in our shop.

Simply put, Seven Days would not exist without her dedication, endurance, talent and taste. 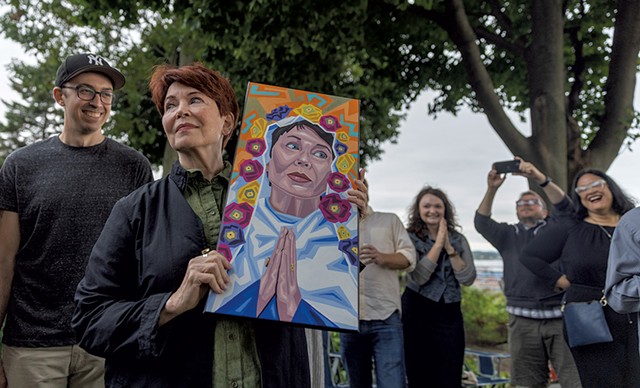 Nor would it be as much fun. Pamela is responsible for the religious art in our bathroom — the "shrine" is the highlight of every Seven Days office tour. So when we ran out of words of praise for her that Saturday, art director Diane Sullivan presented Pamela with a portrait of herself in the saintly getup she wore atop our Mardi Gras float one year, painted by Vermont artist Jesse Azarian. It will be on permanent display in the loo.

Diane also struck up the Seven Days house band, Enemy of the People, singing an acoustic version of the original tune "Pamela." We all joined in the chorus: "Pamela-ah-ah-ah-ah. I love you. I really, really, really do."

Finally, there was cake: Custom baker Erinn Simon frosted it to look like James Kochalka's 2019 cover of the Seven Days Cartoon Issue, one of Pamela's many creative contributions to the editorial oeuvre. Simon gave the character Pamela's haircut. Surrounded by flowers and holding up a butterfly, it looked just like her.