From the Publisher: Page-Turners 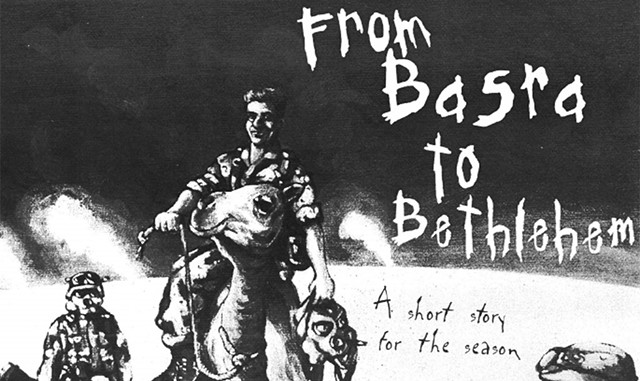 "It was up there on the Kuwaiti-Saudi border back on Christmas eve, 1990. Right on the goddamn border. Saudis had a big sand berm 20 feet high that ran the whole border, and every thousand feet or so in the sand berm was a big concrete fortress we called the Alamo. Saudi border guards were in the Alamo in normal times to keep out the infidels. No sign of those Saudis fuckers now. Just a dozen Third Force reconnaissance marines, spitting chew on the sand rats' oriental rugs in the downstairs tea room of the Alamo, maybe thinking about you all back home holding hands around the Christmas tree singing hallelujah."

So began "From Basra to Bethlehem," Seven Days' first published work of fiction, in the issue dated December 20, 1995. Pamela Polston and I had just started the paper; we were a dozen or so weeks into it when writer Tom Paine offered us a "short story for the season." Both of us immediately recognized how good it was. Narrated in the voice of a disillusioned Desert Storm vet — "a clean-cut Burlington boy who joined the Marines to get money for college" — it was a taut take on modern desert warfare, a very different kind of Christmas story.

Seven Days earned a Pushcart Prize for publishing it, and the Winter Reading Issue was born.

Good writing has always been our aim at Seven Days; in the beginning, we freely mixed journalism and fiction. Our very first issue featured a trippy piece by University of Vermont English professor Phil Baruth, now also a state senator. The next year, in advance of Thanksgiving, we convened a "literary potluck," to which David Huddle, John Engels, Peter Kurth, Bill Scheller and Abigail Stone, among others, brought "dishes." Ron Powers wrote about "my dad and his thing with the celery stick," a memory that "somehow stuck in the mind like a private ritual accidentally observed." Our production manager at the time, Samantha Hunt, offered sweet potatoes and a glimpse of her impending career as a prolific, award-winning novelist.

For several years, the paper organized an Emerging Writers Competition, and the winning entry headlined our Summer Reading Issue, which has since been replaced by the annual Cartoon Issue.

More recently, two months into the pandemic, we wrangled creative writing, poetry and cartoons from local artists to create an entertaining and therapeutic "Green Mountain Quaranzine."

While rigorously reported, fact-checked journalism serves the community, you could argue that fiction feeds the soul — especially at a time like this.

Seven Days culture critic and associate editor Margot Harrison assigned the stories for this literary issue and contributed one of her own: a humorous personal essay about navigating TikTok as an author promoting her books. Margot has worked full time with us for 14 years, reviewing countless films and books while bringing her grammar lessons and English PhD perfectionism to every story she edits. During that time, she has written two novels for young-adult readers. The third is forthcoming in July from Little, Brown Books for Young Readers.

I love the title: We Made It All Up.