From the Publisher: Next Time... 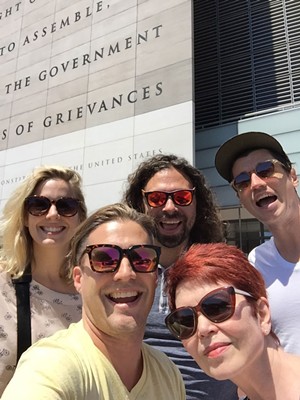 Every summer, a bunch of us from Seven Days attends the annual convention of the Association of Alternative Newsmedia, a gathering of publishers, editors, reporters, designers and salespeople from comparable papers across North America. The three-day event takes place in a different city every year, and member weeklies used to compete for the honor to host it in much the same way countries do for the Olympics — working their connections and local intel to pitch and show off their burgs.

That's how we got former president Bill Clinton to submit to three hours of questioning in Little Rock; the run of the Andy Warhol Museum after it closed for the day in Pittsburgh; and, in New Orleans, a chance to party among giant Mardi Gras floats.

In years when my founding partner, Pamela Polston, and I were too busy to take a normal vacation, the AAN convention was the next best thing — in Miami, Detroit, San Antonio, Nashville, Toronto, Tucson, Boulder, San Diego, Austin and Portland (Ore.).

The first convention we attended as publishers was in 1997, two years after we started Seven Days. It took place in Montréal, as close as it would ever get to Burlington, but we couldn't justify the expense of a hotel room. So, we drove up and worked out of the parking garage, getting dressed between cars, until a fellow attendee — the political columnist for the Nashville Scene — took pity on us and let us crash in his extra hotel bed.

We were in awe of the brilliant, unruly characters around us, the people who built and ran iconic publications such as the Village Voice and the San Francisco Bay Guardian. And they lived up to the legend in Montréal by kicking the host paper out of the organization.

The Montréal Mirror had just been purchased by a daily newspaper chain — then a disqualification for membership, according to AAN's bylaws. And, pre-internet, corporate takeover was considered the greatest threat to edgy, forward-thinking media companies like ours. After all, we were the "alternatives" to those daily newspapers.

I soaked up as much information as I could — in the seminars, at the annual meeting and by flat-out eavesdropping at the hotel bar. In 1998, we applied for admission to the association and were accepted.

Years later, while serving on the committee that evaluates applying papers and makes membership decisions, I discovered that AAN rejected most applicant media companies at least once. I learned a lot about how to run a newspaper, too, for which I'm eternally grateful.

DigBoston was supposed to host the convention last year, but COVID-19 changed that plan. So, the scrappy successor to the Boston Phoenix — in the second-closest big city we could drive to — rescheduled for 2021.

Two cars full of vaccinated Seven Days staff were ready to roll south last Wednesday when we got an email from convention organizers about a last-minute change in coronavirus protocols. Because the number of cases was rising in the Boston area, there would be an indoor mask mandate. And one AAN board member, despite being fully vaccinated, had contracted the virus and was quarantining in the hotel.

We convened at the office and discussed our options — more specifically, how much risk each of us was prepared to take. Even if breakthrough coronavirus isn't deadly, we asked ourselves: Am I willing to be sick for a week? Is it worth it?

Cathy Resmer and Dan Bolles both had vacations after the convention, with unvaccinated kids, and they didn't want to take the chance. Production manager John James also had plans that were incompatible with a possible quarantine.

Personal calculations aside, though, there was the realization that one of us might contract the virus, infect the others, and then spread it to the rest of the Seven Days staff. That's a "greater good" problem. To put the paper at risk, after all our local media company has been through these past 18 months, was just dumb. Turns out SARS-CoV-2 is a bigger threat to small, local newsrooms than corporate takeovers.

From the Publisher Association of Alternative Newsmedia AAN