From the Publisher: Losing Frankie 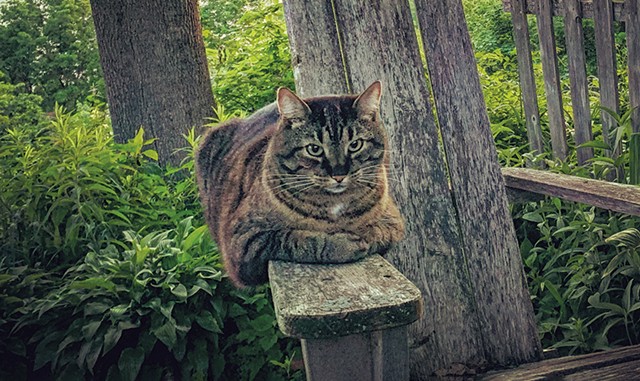 More than 23 million Americans adopted pets during the pandemic, seeking unconditional love, companionship and animal entertainment. My partner, Tim, and I already had all of that in our beloved cat, Frankie, a neutered male gray tiger. We happily let his rituals rule our lives, from 4 a.m. feedings to indoor mouse torture.

Most of the time, though, he was perfectly chill. Every evening, he'd stretch out vertically on Tim's legs, like a body surfer, and they'd drift off to sleep together. At the end of the day, these two mammals, similarly positioned, snoring lightly, brought me enormous comfort when nothing else did.

All of that changed in an instant last Wednesday, when I looked up and saw Frank dragging his back limbs, the way an animal with a spinal injury would. I wondered whether he had been hit by a car — he's an indoor-outdoor guy — but there was no blood. Panicked, I ran downstairs to fetch the cat carrier. As soon as I opened it, he pulled himself inside the crate.

I drove like a maniac through five o'clock traffic to Burlington Emergency & Veterinary Specialists in Williston. Historically, Frankie rarely meowed — even in the car, something Tim and I both celebrated when we adopted him six years ago, at age 4. But this time he was wailing — in pain, I presumed. He stopped briefly when I got Tim on speakerphone. The sound of his dad's voice soothed the cat. Unfortunately, Tim was in Washington, D.C. — he'd left that morning.

BEVS wasn't where it used to be, but I eventually found it. Like a wild woman, I rushed in with the carrier and handed Frank over for triage. If I'd been thinking straight, I would have remembered that this building had been off-limits to pet owners for much of the last two years. I was lucky to get in and be escorted to a private room with a metal examining table, whiteboard and box of tissues.

But any appreciation vanished with Frank's diagnosis: saddle thrombus, a clot in the heart that blocks circulation to the lower extremities. The vets did not recommend treatment. I saw him one last time. He was terrified, with an IV in his front leg and a cone around his neck. And that was it. One minute our sweet cat was chasing down kibble for exercise. The next, he was being euthanized. The date seemed significant: the second anniversary of the pandemic shutdown, exactly one month after our next-door neighbor's death and four days before the first day of spring.

Why is it easier to cry for an animal? Because they provide a shortcut to the human heart. tweet this

When they returned his body to me, curled up in a round bed, Frank looked peaceful, as if he were taking a nap. I just couldn't let him go, so I stayed, stroking his soft fur, convinced I could feel him purring. I sobbed for my loss — and everyone else's. The last two years have been marked by so much sudden and unexpected death, intensified in the last month by the horrors unfolding in Ukraine. That news often makes me sick, and angry, but it rarely brings me to tears.

Why is it easier to cry for an animal? Because we let our guard down for them, according to children's author Kate DiCamillo, and they provide a "shortcut to the human heart." A link to her interview last Thursday with "On Being" radio show host Krista Tippett, shared by a thoughtful friend, arrived at just the right moment.

Kids know instinctively that all creatures are sentient, DiCamillo said. Adults choose to forget because "it's too painful." As a writer who shapes young minds, she wonders, "How do we tell the truth and make the truth bearable?" It's a good question for journalists, too.

Honestly, I don't have the answer. But as I get older, I know she's right about hope and heartbreak living side by side.