From the Publisher: In the Spotlight 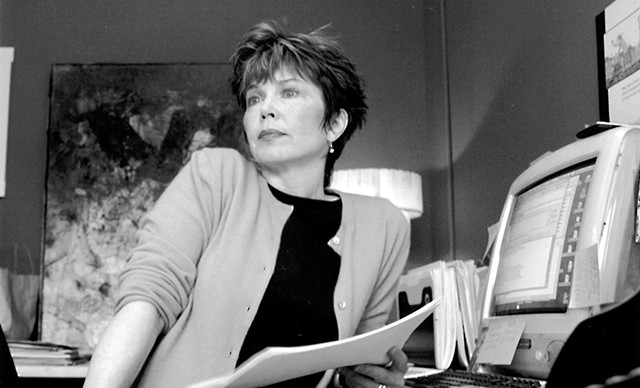 It's fitting that Seven Days is publishing its annual Performing Arts Preview the same week that the State of Vermont is recognizing the lifetime achievement of our cofounder and former coeditor Pamela Polston. Every year the Vermont Arts Council honors a short list of creative people who have significantly enhanced the state we call home. Five award categories showcase the variety. Pamela is in good company with poet and professor Sydney Lea of Newbury; Mara Williams, longtime curator at the Brattleboro Museum & Art Center; Steffen Parker of Williston, who has directed the Vermont All State Music Festival for a quarter century; and Lydia Clemmons of the historic Clemmons Family Farm in Charlotte.

Pamela is receiving the Walter Cerf Medal for Outstanding Achievement in the Arts, named for a philanthropist who gave away more than $5 million to the state's arts organizations. It recognizes individuals "who have made a sustained contribution to the arts and had an impact on Vermont's cultural life." Past recipients include writer Chris Bohjalian, cartoonist Alison Bechdel, poet and playwright David Budbill, and former Flynn Center executive director Andrea Rogers.

By selecting Pamela, a journalist, the council acknowledges that critiquing, promoting and writing about Vermont culture, week after week, is crucial to maintaining it. At Seven Days, it was Pamela's job to find and assign stories — and she wrote a ton of them. She also recruited and edited arts writers and responded to countless story pitches. Her long service to Vermont artists and cultural institutions has given them something just as valuable as donations and ovations: ink.

Choosing what to cover — and how — is an art in itself, one that Pamela quietly mastered. Thankfully, she also found time to mentor staffers Dan Bolles and Elizabeth M. Seyler, who have taken over her duties as culture editor. The job is so vast, though, that the two of them are sharing it. Pamela will continue to assemble the visual art section of Seven Days, compiling our comprehensive gallery listings, as well as reviewing and spotlighting exhibitions — until she finds a suitable replacement for that, too.

Training the next generation of culture writers and editors is an important part of Pamela's legacy. So is this annual Performing Arts Preview, which for years she and I reported and wrote ourselves. On Tuesday, September 11, 2001, when terrorists attacked our country, Seven Days was on deadline, producing a newspaper about the new performing arts season. We ran a syndicated story about the national tragedy, but we didn't have enough staff to pivot to a new plan.

It was embarrassing at the time, but looking back, celebrating the creative spirit during a time of great uncertainty seems brave in a way. I have similar feelings about this week's paper, published during the ongoing pandemic. We all need something to look forward to. In Vermont, at summer's end, that's always been a fresh slate of live shows. Thanks to the state's intrepid arts presenters for stepping up and giving our culture staff — past, present and future — so much to write about.

And thanks to the artists for lighting a way through the dark.