From the Publisher: In My Backyard 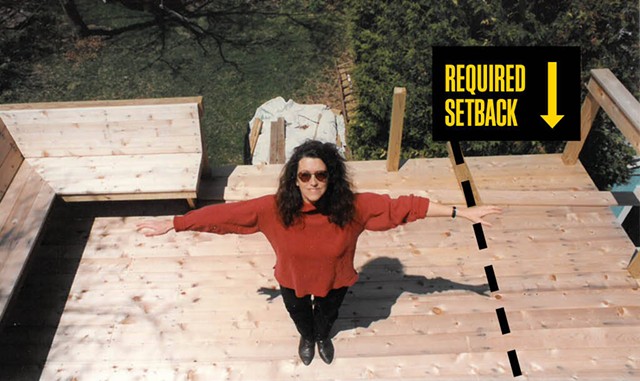 I first learned about zoning regulations — one of the subjects of this week's cover story — years after I inadvertently violated one. My partner and I needed every inch of living space we could get in and around the 800-square-foot home on Burlington's Ward Street where I hung my hat for 20 years. We hired a guy to put a simple deck on the flat roof of the first-floor living room.

Accessible from the upstairs bedroom, the seasonal space looked out on the backyard — and beyond, over aging picket fences to Volz Street. Wisteria eventually wound around the woodwork, and a locust tree provided shade — until, after years of outdoor enjoyment, the deck had to be replaced. This time, the builder said we needed a permit, and the application was rejected.

The original deck had been illegal, apparently. Since the house was built in 1920 — literally on the property line shared with our next-door neighbor — zoning laws had been established. Any new construction had to be set back five feet from that boundary. "New construction" included the deck, even though it didn't expand the house's original footprint.

We made our case to anyone who would hear it, including the Burlington Zoning Board of Adjustment, now the Development Review Board. Despite a letter of support from the affected neighbor, the board voted against our request for a zoning variance — unanimously. The replacement deck went up but couldn't extend all the way to the eastern edge of the roof. It looked kind of ridiculous because the house was only 16 feet wide.

The rules were so strict that I was surprised, a few years later, when a multiunit apartment building sprouted up in a lot behind us. It looked like a ship, totally out of scale with the neighborhood, and the second-floor tenants looked down from their windows right onto our property, like contestants on "Hollywood Squares."

I hated it — and said so to my friend Brian Pine. At the time, he was working in the city's Community & Economic Development Office as a housing specialist; now he runs the place.

"People have to live somewhere," he schooled me, clearly annoyed to hear the "not in my backyard" refrain from someone he expected to be more enlightened.

You get so accustomed to things being a certain way that the anticipation of change is often worse than the reality. In truth, I quickly forgot what the deck's "view" looked like before — much like I adjust when someone shaves a beard or gets a haircut.

The same thing happened after we moved to Lakeview Terrace in 2009: In the past decade, large apartment complexes have gone up at either end of the street. I was sad at first, but I've adapted. There's a lot more traffic, and the street is louder as a result of more passersby — including in the wee hours of the morning, after the bars let out.

On the plus side, we have a whole crop of new neighbors and a coffee shop at the end of the block.

Brian was right. People have to live somewhere.