From the Publisher: Have You Heard? 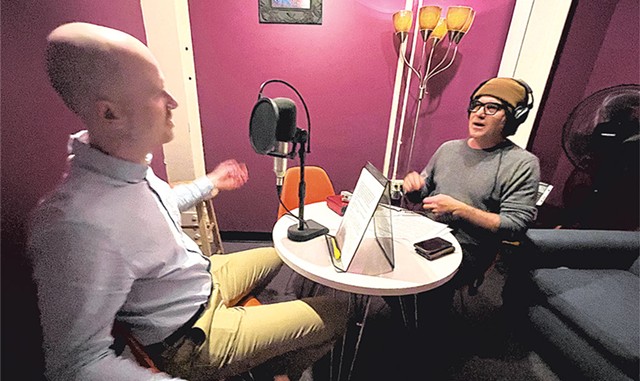 A phone rings twice, then a male voice intones, "It might as well be midnight, so heavy are the rain clouds over downtown St. Johnsbury. Even the streetlights seem dull under their weight."

The narrator goes on: "Chantelle Blackburn arrives a few minutes before 8 p.m. at the white Colonial overlooking Main Street. She unlocks the front door, slips inside and snaps the dead bolt shut, then ascends a dark stairwell up to the room where she will spend the next 13 hours."

Colin Flanders wrote these words for a story in last week's Seven Days, about a suicide-prevention hotline operator working the night shift, the sole soul on duty in Vermont on a cold November night.

He also read the lines aloud for an audio version of his narrative, which you'll find embedded in the online story.

For the past few months, Seven Days reporters have been recording two or three stories from each issue of the paper. We kept the experiment quiet until we had enough content to share, but now we're shouting from the rooftops: If you'd rather listen to our journalism than read it, check out Seven Days Aloud.

Our creative director, associate publisher and "IT guy" extraordinaire, Don Eggert, would probably put himself in that category. He pitched the idea to our leadership team and found a startup company, Shordio, shopping an affordable audio player. He figured out how to artfully embed the track — just above the first paragraph — in our online stories. He branded the initiative and designed the landing page for all the recorded stories at sevendaysvt.com/aloud.

Manning the studio is Jeff Baron, a musician and sound engineer who worked for one of the world's first audiobook publishers, Recorded Books. Subsequent gigs in youth radio, oral history and audio education qualified him to manage this project, which he does on top of his full-time job as one of our graphic designers.

Before this, Jeff worked in circulation and sales at Seven Days. In April, he contributed to a cover story about veteran WJOY radio personality Ginny McGehee.

He's part of the team that selects which articles will get audio treatment, ranging from long cover stories to short features, book reviews, food pieces and "Life Stories" tributes. Sally Pollak's recent obituary for Pete Sutherland, with original tunes at beginning and end, is worth a listen. So is the investigative piece on Nicholas Languerand, the sole Vermonter charged in the violence at the U.S. Capitol on January 6. One of the most important stories we published in 2022, it's among the first pieces Jeff recorded, to test the concept; we've timed its release to coincide with the upcoming second anniversary of the failed insurrection.

Jeff puts a lot of time and thought into the process. He schedules the writer-readers, coaches them through the recording work, edits the audio and even adds a little sound design to the mix.

Doing it right is time-consuming — not unlike putting together a good newspaper. That's one reason I was initially skeptical about committing to this initiative long-term. I wondered, too, at a time when everybody and their uncle has a podcast, how appealing a story crafted for the printed page would be simply read aloud.

Answer: pretty damn appealing. Instead of sitting in a chair to read, you can listen while you exercise, do errands or fold the laundry. Hearing Vermont writers voice their own work sounds way better than the robot readers employed by the Washington Post and the Wall Street Journal.

You also hear things in the oral version that you might have missed in print — in the case of Flanders, really good writing and, perhaps, some poetry.