From the Publisher: Great Minds 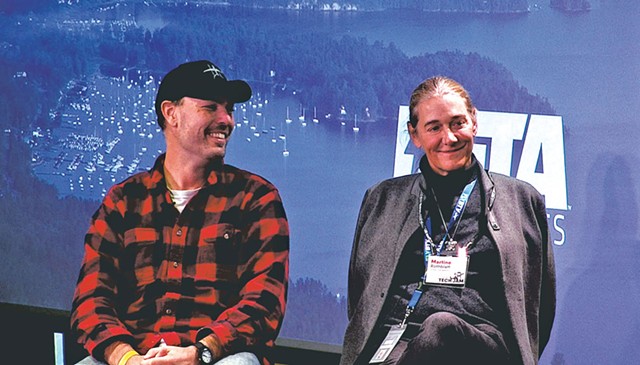 It's a Cinderella startup story: Vermont engineer/entrepreneur Kyle Clark teamed up with Martine Rothblatt, who built Sirius Satellite Radio, to create a company that aims to save people — and the planet.

With Rothblatt's help, Clark's Beta Technologies is racing to build an electric vertical aircraft that can deliver cargo without leaving a carbon footprint. In May, Beta announced that it had raised $368 million from investors, including Amazon's Climate Pledge Fund.

Seven Days brought Rothblatt and Clark to the Vermont Tech Jam to find out how their partnership got off the ground. Staff writer Chelsea Edgar interviewed the pair live onstage at the Hula tech campus in Burlington on October 23. In an illuminating sit-down, the two pilot-inventors discussed their remarkable relationship, the advantages of growing a business in Vermont and the secret to Beta's success — what they call its "challenge culture." If you missed it, a video of their conversation is below and at techjamvt.com.

What convinced Rothblatt that Clark could deliver on his plan to build an electric aircraft? It was partly what she saw in 2017 on her first visit to Beta's tiny office: a quote from anthropologist Margaret Mead on the wall that read, "Never doubt that a small group of thoughtful, committed citizens can change the world. Indeed, it is the only thing that ever has."

The words summed up the potential — and competitive advantage — that Rothblatt saw in Clark and his sketches of a da Vinci-esque battery-powered flying machine. Such a plane would be a game changer for her biotech business, United Therapeutics, which is on its own trailblazing quest to manufacture and deliver organs for transplant.

Another reassuring takeaway from that workplace encounter: Clark wasn't just envisioning aircraft; he was building them.

In fact, Clark had quickly assembled the makeshift office, hoping it would convince Rothblatt that he was legit, he revealed to a crowd that included his wife and parents. He'd been trying for 17 years to find someone to believe in and back his idea. Rothblatt, who had similar struggles financing Sirius, said she immediately recognized that Clark was "an individual who could merge art and engineering ... He understood all of the aerodynamic and electrodynamic principles" to pull off the job but also had "an intuitive sense of how to make something beautiful."

Rothblatt's initial $1.5 million in startup capital helped Clark launch his company. She also became its first customer, placing the initial $48 million order on behalf of United Therapeutics. Now Beta is valued at $1.4 billion and employs 300 people. It is eventually looking to hire 800 more and open a new "training center" — with employer-provided childcare — at the south end of the runway at Burlington International Airport. A number of customers, including UPS, are ordering the plane in advance of its approval by the Federal Aviation Administration.

In truth, the FAA has the power to make or break Beta, but Rothblatt praised its current chief, Steve Dickson, for his recent remarks about the decision to return the 737 Max to the skies. Learning from the mistakes of Boeing, whose corporate culture of acquiescence contributed to a design flaw that cost hundreds of lives, Dickson, a former F-15 pilot, put the plane through its paces. He personally flew the aircraft, and grilled employees up and down the company hierarchy, before green-lighting it.

"That's what Kyle does. Kyle is our Steve Dickson," Rothblatt told the audience. "And this is why I'm confident that Beta will succeed."

Clark explained that in Rothblatt, he has "somebody who was thinking about physics and the world and interdependencies way beyond what I'll ever be able to do," he said. She's also given him credibility, access to other funders, valuable business advice and the occasional course correction.

Rothblatt said she'd learned from Clark, too, describing him as the "business soul mate I've always been looking for."

If you're interested in how ideas turn into action, or just observing how two fascinating people interact, the recording of their conversation with Edgar is worth watching.

Finding and telling Vermont stories is what Seven Days does. We're delighted to be able to share this one with you.