From the Publisher: Eva's Eye 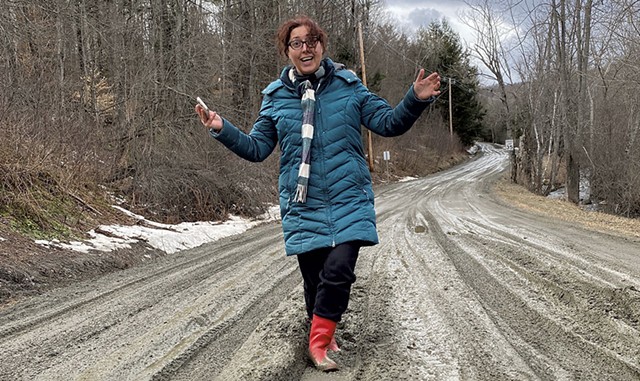 The current episode of "Stuck in Vermont" certainly lives up to its name. To land this week's video story, Seven Days senior multimedia producer Eva Sollberger pulled on a pair of muck boots and sloshed into mud season, weaving together images of vehicles negotiating foot-deep ruts and the memories of an old-timer who's lived through 80-plus Vermont springs.

The topic is timely: By all accounts, this year's mud season is one of the worst in recent memory, and residents of one rural town have developed an e-newsletter, the East Barnard Village Crier, to help them navigate the muddy roads. Eva also found a local source to provide historical perspective: Born in 1936, John Leavitt has lived his entire life on the same dirt road, which annually turns to soup. He's full of stories and wisdom that Eva, who grew up in Johnson, expertly draws out. While the credits roll, you can hear the two of them off-screen, yukking it up.

Intimate and authentic, Eva's video stories from all corners of the state remind us of why we live here.

Invisible to the viewer, however, is the staggering amount of work involved in making the semimonthly series: the sourcing, scheduling, traveling, shooting, music selection and editing. For the mud season episode — her 662nd for Seven Days — Eva used three cameras: her big Canon for the inside interviews and her GoPro and iPhone to shoot from inside a truck.

Postproduction, turning the raw footage into nine perfect minutes took roughly 40 hours. While dozens of Seven Dayzers are assembling the paper each week, Eva is crafting her "Stuck in Vermont" alone, in her home office, often into the wee hours of the night.

After 15 years on this schedule, "I'm getting too old for all-nighters," she confessed to me on Monday morning. "But this mud vid kept me up 'til 2 a.m. It was a complex story to whittle down and shape."

She makes shorter versions of her pieces that air on WCAX-TV as part of the Friday evening newscast. And the station is glad to have them. Television journalists instantly recognize the work and talent that goes into each episode.

So, too, does the New England Newspaper & Press Association, from which she has earned a pile of first-place plaques. Eva is once again a finalist for all four of NENPA's video awards — feature, entertainment, sports and news — for stories about the dismantling of Founders Hall at Saint Michael's College, winter swimming in Lake Champlain with the Red Hot Chilly Dippers and the training schedule of "American Ninja Warrior" contestant Amir Malik of Essex. All of these nominees, including "The Tran Family Patriarch Gets Vaccinated," were shot during the pandemic.

New this year: Eva is one of two honorees who will receive an Exceptional Performance in Journalism award at the American Public Works Association's annual expo in North Carolina. The New England chapter of the group nominated her for her January video about Huntington road foreman Clinton "Yogi" Alger and the snowplow the kids in town named after him.

Eva captured Yogi's delight when he learned about his namesake plow at a surprise ceremony last November, and she elicited uncommonly articulate praise from a group of elementary school students. Said one of Yogi, "He does so much in town to make it the best community we can have."

Documenting such moments is Eva's specialty, but the episode wouldn't have been complete without a snowstorm ride-along. She hit the road with Yogi in January and got some great footage of him doing his job, skillfully sweeping deep snow from the back roads of Huntington. All mud now, no doubt.

A storyteller for all seasons, Eva shares her awesome view.