From the Publisher: Cat Tale 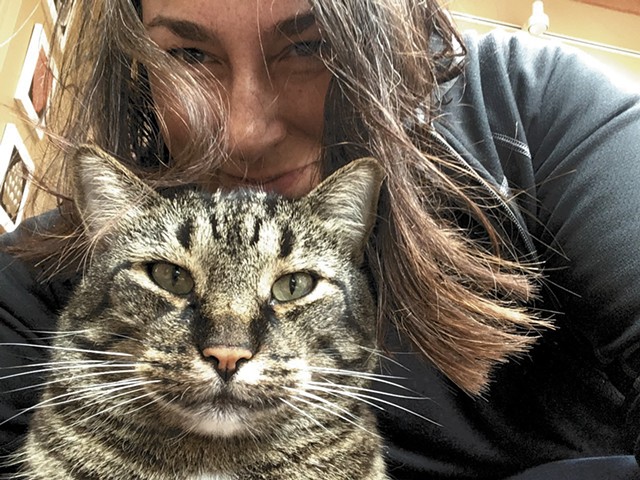 When my beloved cat Frankie died unexpectedly in March, I described the experience in this column. One minute a handsome gray tiger was luxuriating on the warm tiles of the sunroom. The next he was dragging himself across the floor, as though hit by a car.

My significant other, Tim, was away, so I rushed our boy to Burlington Emergency & Veterinary Specialists in Williston, where the diagnosis was swift and terminal: a blood clot in the heart called saddle thrombus. An hour after Frank was stricken, I was sobbing over his dead body. The vet techs had lovingly curled him into a circular bed so it looked like he was sleeping peacefully. In that moment, I would have done anything, paid whatever sum, to make it a catnap.

I was alone in that sterile exam room but soon felt the warm embrace of fellow animal lovers. I received almost as many emails and condolence cards for Frank as I did for my mom, who died two years earlier. I think that's because so many people — of all ages — have experienced the death of a pet.

And, sadly, when you get to be as old as I am, it's likely to have happened multiple times. With the exception of some turtles, pet lives tend to be much shorter than human ones. These furry friends, who lend love and purpose to our existence, are also measures of it. With each loss, I find myself wondering: Do I have another animal in me?

I'm taking a break to find out. For the first time in 20 years, Tim and I are cat-less. We're trying to embrace the benefits of this newfound freedom: a cleaner house, more backyard birds, no waking up in the middle of the night to the sound of mouse torture or cat retching. The last two would often go hand in hand.

We got rid of the kibble and kitty litter — but not the cat door. The latter is permanently blocked from the inside now, but the obstacle in place wasn't enough to prevent a recent raccoon invasion. When I woke in the middle of the night to weird sounds, I coaxed myself back to sleep with the weirdly reassuring thought: Well, it can't be Frankie. In the morning, we found muddy footprints on the kitchen cabinets and a trail of fruit and compost leading back to the cat door — renamed the coon door.

Last weekend, on a reporting trip to the Northeast Kingdom, we spontaneously decided to get a room at the Four Seasons — the Derby Four Seasons, that is. Getting back to feed Frank didn't enter into the decision. Even when we had a reliable cat sitter staying at the house, I always worried about him when we were away.

At least I know where he is now: in our backyard, which he shares with his predecessor, Tito, and the cremains of my parents. The only missing family member is my late sister, Pam, who devoted her life to animals. From childhood, she never wavered in her determination to be a veterinarian.

I'm pretty sure Dr. Routly would recommend that Tim and I get another cat. I know, too, that she'd love this week's Animal Issue.