From the Publisher: Buckle Up

Asked what recommends each of them for the job, Lt. Gov. Molly Gray proclaims, "A healthy ego and the correct gender"; Sen. Kesha Ram Hinsdale (D-Chittenden): "I've got that plus attitude!"; "Um...experience?" offers Sen. President Pro Tempore Becca Balint (D-Windham).

In her thought bubble, Kunin wonders: "Sheesh...Are we there yet?"

Published in Seven Days, the Barre-Montpelier Times Argus and the Rutland Herald, the cartoon drew immediate ire from Democratic activists.

Elaine Haney, director of Emerge Vermont, which trains Democratic women to run for office, dissed the cartoon on the org's website. She listed the "entrenched stereotypes" she sees in Newcomb's drawing, which include depicting the candidates as a car full of "bickering girls" and putting Ram Hinsdale, the only woman of color, "in a booster seat — in the back of the car."

Like all good political cartoons, this one is rooted in fact. Ram Hinsdale, 35, is the youngest of the candidates. Gray, who is also strapped into a car seat, has the least amount of electoral experience — she's been in office for just a year.

Over at the Times Argus, the cartoon generated numerous angry calls and emails. "I had two people say that I should resign as a misogynistic male publisher," Steve Pappas said in a Monday interview. Instead, he wrote an editorial in Tuesday's paper, the first line of which is: "Tim Newcomb is entitled to his opinion."

Encyclopedia Brittannica defines a political cartoon as "a drawing (often including caricature) made for the purpose of conveying editorial commentary on politics, politicians, and current events." Newcomb has been drawing them since Richard Snelling was governor; in 2019, he won the top editorial cartooning award from the national Association of Alternative Newsmedia.

Newcomb's take didn't provoke a superstrong reaction from Seven Days readers. But on Sunday, a letter to the editor came in the form of a cartoon from Llu Mulvaney-Stanak, a former Democratic campaign staffer who's now the station manager for WGDR radio in Plainfield. It's a clever response, except for the box across the bottom that condemns Newcomb's work as "mysoginistic [sic], racist and ageist."

Mulvaney-Stanak immediately posted the comic to Twitter, tagging Seven Days and urging the paper to drop Newcomb, writing, "If someone shows you that they can't do better, believe them and replace them."

Seriously, folks? Rep. Peter Welch (D-Vt.) had to put on a gas mask and flee from an angry mob in his last term in the U.S. House. If these candidates can't handle a sharp-elbowed sketch in local newspapers, how will they hold up in D.C.?

Vermont is the only state that's never sent a woman to Washington, and Democrats seem determined to finally make it happen. Many prominent Dem dudes are sitting this election season out.

Does that mean we should treat these trailblazers differently than their predecessors, who were regularly portrayed in all manner of unflattering ways to make a cartoonist's point about their strengths and weaknesses? Vermonters rely on an independent media to help vet candidates for public office. That work will be even harder to do if parties, activists and politicians respond to every pointed critique with claims of sexism and racism.

Cartoonist Tim Newcomb has been skewering Vermont politicians since Richard Snelling was governor of Vermont. His first drawing, for a 1984 cover of the Vanguard Press, showed Snelling and Public Service Board commissioner Richard Saudek together in a car, coming down from Canada after negotiating an energy deal with Hydro-Québec. Saudek hated the drawing so much, "he came close to punching me out in a Montpelier restaurant," Newcomb recalled, noting that the two eventually became friends.

Former governor Jim Douglas appreciated Newcomb’s work, too — after he left office. "Political cartoons have played an important role, going back to the 19th century, in contributing to political discourse," Douglas told the Barre-Montpelier Times Argus upon the publication of Newcomb’s 2018 book, A Gaggle of Governors. "They often put an exclamation point on the big issues and personalities. Tim has certainly continued that tradition."

Here, in 12 panels, are some graphic highlights of Vermont political history, according to Newcomb. 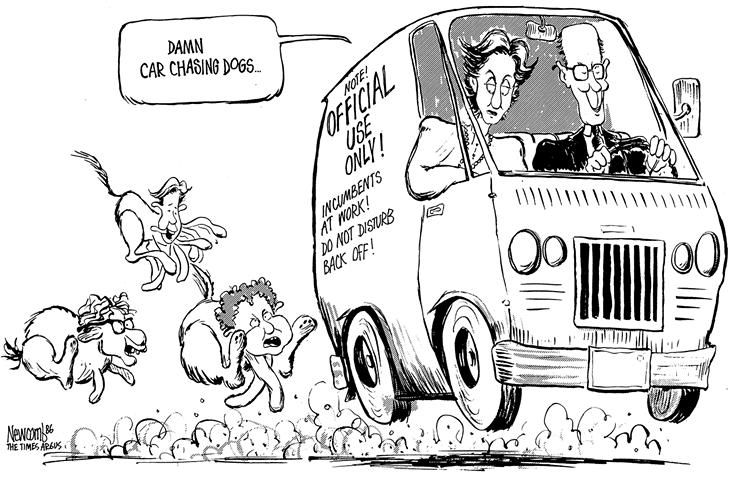 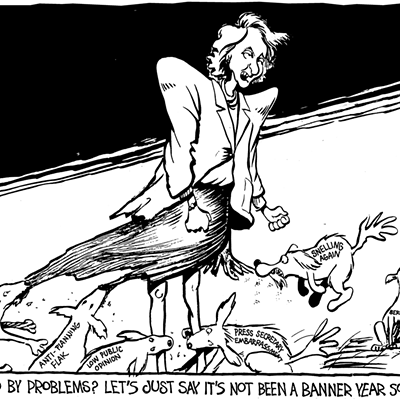 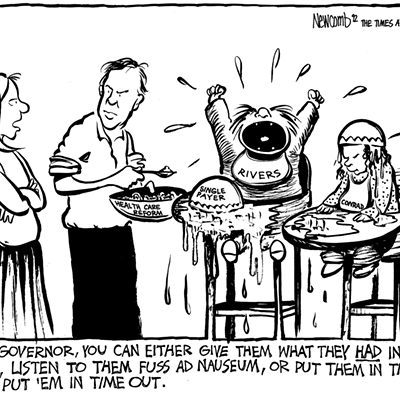 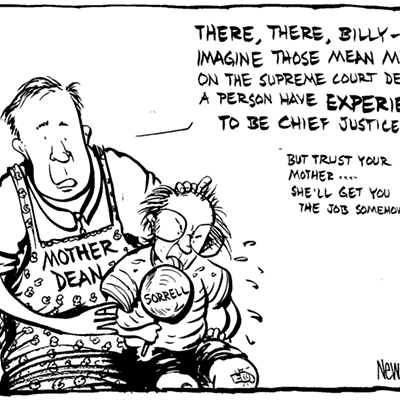 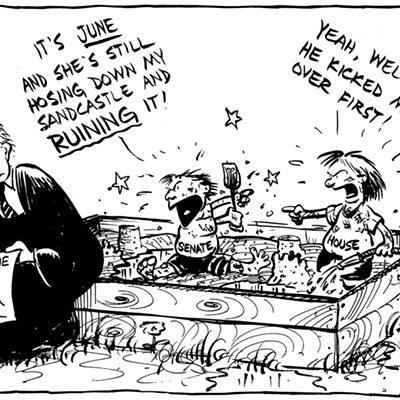 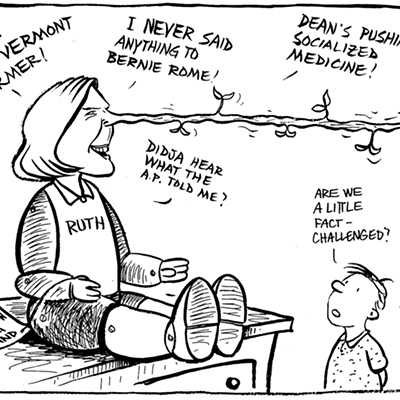 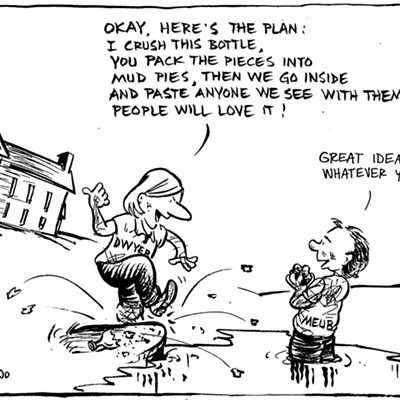 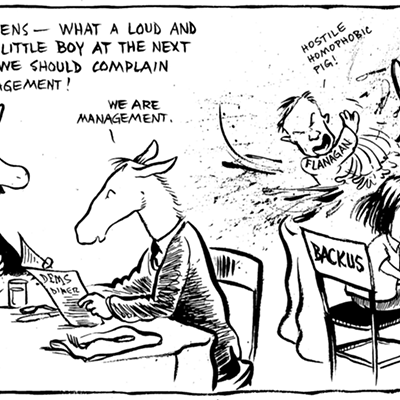 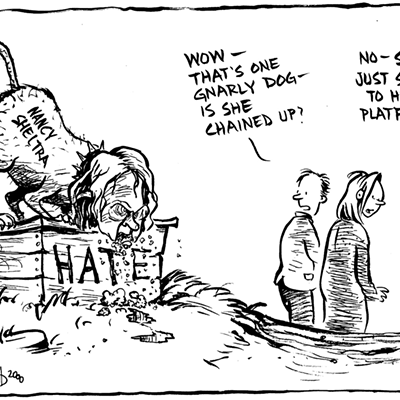 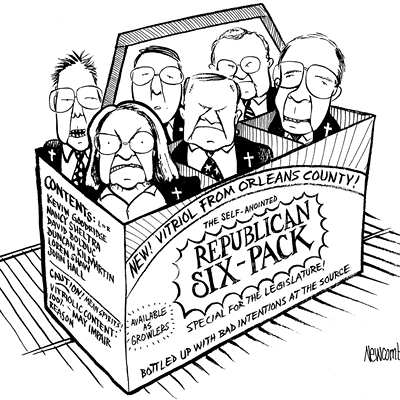