From Painting to Sculpting to Blacksmithing, Harlan Mack’s Artwork Relays a Worldview 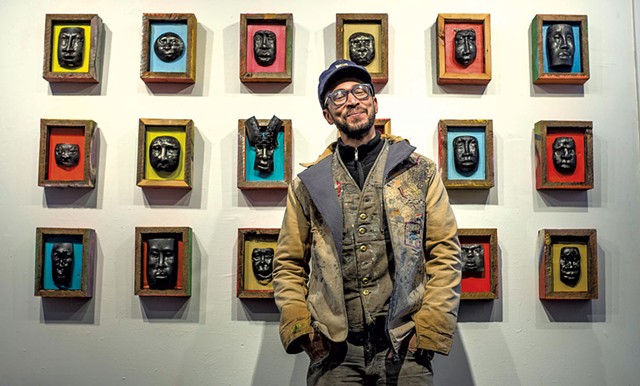 Harlan Mack is a 40-year-old artist who lives in Johnson about a mile from the Vermont Studio Center, where he has worked for the past 17 years. Last week, when Seven Days visited him at the VSC sculpture studio, the campus was eerily empty, rendering Mack's jobs as sculpture shop manager and resident life manager moot.

Soft-spoken, humorous and people-oriented, Mack also facilitates the making of community among "50 individuals who specialize in individuality," as he put it.

When he talked to a reporter, the artist was hanging an empty studio wall with what seemed like stand-ins for the missing residents: 51 individual faces, each about the size of his hand, that he had forged from steel, affixed to vividly painted backgrounds and framed with reclaimed wood. Called "Future Kin," the collection recently returned from a show at Jenkins Johnson Gallery in San Francisco.

While he hung the collection and gestured to other work, Mack talked for three and a half hours straight. "I guess I have been a little starved for in-person time," he admitted later by email.

It's no exaggeration to say that three and a half hours barely touched the surface of this artist's life and work. Mack is a thinker — a self-made philosopher — and an enthralling storyteller. Over the years, he's developed an all-encompassing mythology to explain his work to himself. He's also deeply interested in the narratives others see in his art.

Mack's searching extends to his startlingly varied material practice. A spin through his website reveals 3D human figures welded from metal filaments and handpainted; a sunburst arrangement of handcrafted spades, each shovel bearing a face; wood collages that fit together like puzzles; and animal figures made from scrap metal that convey uncannily lifelike movement and emotion.

"What his work has become is a visual language of storytelling." Leila Bandar tweet this

His representational paintings, which often show apocalyptic scenes, explore his ever-evolving mythology. Their forms can resemble cinematic storyboarding or frames from graphic novels. Mack's fictitious epic spans humanity's past and future and is shaped by a character he calls Death — not a particularly dark force but a powerful one. Often, Mack re-creates a figure from a painting — a rabbit, a sphere — as a metal sculpture. He describes his multimedia practice as a "fluid dialogue."

"What his work has become is a visual language of storytelling," said Leila Bandar, a sculptor who taught Mack during his undergraduate years at Johnson State College (now Northern Vermont University-Johnson), where he earned his bachelor's and master of fine arts degrees. Bandar also served as his senior thesis exhibition adviser. (She is now a writing and humanities specialist at NVU.)

"It's more than just sculpture or painting or graphic novels," Bandar said. "It's an emerging hybrid of elements, which makes his artwork unique and, I think, reflective of something in the human experience. He's bridging worlds."

Kathy Black, a painter and VSC's program director, has known Mack since her husband, painter Joe Salerno, taught the young artist as an undergrad. She sees Mack's work as a world to be discovered by the viewer.

"It has a kind of menace in it and a happy world in it, too, side by side. I don't really understand his narrative, but I don't feel like I need to," Black said. "Those cheery little bunnies — I don't know, they just kill me. The work is engaging enough that I can make my own narrative. It's mine to experience."

Photographer Kelly Holt, who curated "Looking Outward," has known Mack since 2006, when he was an undergrad and she was earning her master's in art education. Holt selected a "mini-retrospective" of Mack's work that demonstrates its range from "the whimsical to the very serious," she said.

The Stowe exhibit includes "Nimbus," a playful monkey sculpture from Mack's early days as an artist; "Beachfront Property and Other Disasters," a painting that reminds Holt of Anselm Kiefer in its foreboding; and "A Harvest," a wood collage made from a dismantled fence at VSC.

"Those [wood collages] can take him a year to make. He waits for pieces with the right weight and texture," Holt said. The collage depicts a figure in the forest beside stacked wood; Mack didn't include a chain saw "because he doesn't want people to think he'd cut down a tree in order to make art," she added. (Mack later said that his intention was "to preserve the tranquility of the moment.")

Mack is also a bladesmith who handcrafts knives using a forge, hammer and anvil. He immersed himself in bladesmithing after a friend in New York asked him to make one, he said. Dissatisfied with the result, he began making three or four at a time until the chef's blades and precisely fitted wood handles attained the perfection of Japanese knives.

Since the pandemic began, Mack has taught himself to sew on a machine left behind in the studio. For the interview, he wore part of his inaugural sewing project, a custom three-piece suit that he is fashioning from multiple paint-spattered pairs of his old Carhartt work pants.

Mack cut the shiny vest buttons from a sheet of brass and shaped them with a screw press — a hand tool from a century ago that he spent "months" searching for online. He fashions many of the tools he needs on his 350-pound anvil, or he buys castoffs.

The artist attributes his maker's mentality to his father, Glenn Mack, who is half Dutch and from a family of builders. Harlan grew up in the woods of Washington, just south of Montpelier, in an off-the-grid house built by his dad. (Glenn, an independent filmmaker, still lives in Washington in the third house he has built for himself there.)

"You know how people talk about being in the sticks? People in the sticks would say we lived in the sticks," Mack said with a laugh. The family — his father and a shifting crowd of half-siblings and cousins — relied on gaslight and candles until they got solar power when Mack was 12. He attended Washington Village School and Chelsea High School, which no longer exists. "It was all in the woods," he recalled.

Mack's mother, whose ancestry has been traced to the West Indies, died of breast cancer at age 29, when Mack was 4. (The artist identifies as "Black or African American and/or mixed race," he wrote in an email.) At the time, he recalled, he dealt with the fear of his own mortality by telling himself that he had already lived four long and full lifetimes.

Many of Mack's early sculptures, of animals, were inspired by childhood play. "Bear Suit," made from rusted bicycle parts, was based on his toy black bear. It won the Upcycle Art Bike Competition organized by Kingdom Trail Association and Catamount Arts in 2016. "Granilla," a lifelike gorilla that reaches out its scrap-metal hand for a shake, took inspiration from a plastic gorilla toy. Both sculptures are on display at the Highland Center.

"When I began making steel sculpture, I realized that I was finally understanding that I could make the toys that I would have wanted in my yard as a child," Mack wrote in an email. "I never really got bored of stuffed animals, action figures and dolls; I just moved on to a different vehicle to express and develop what I was really up to, which was building my own narrative worlds."

Those worlds have brought Mack real-life recognition. In October 2018, he was selected for a residency at the Robert Rauschenberg Foundation in Captiva, Fla. The opportunity was "amazing," he said. He and nine other artists "used Rauschenberg's tools; we played his grand piano. It was rabbits and bobcats and sunsets. I wrote six poems and made 40 paintings in two weeks."

In May 2019, Mack participated in a three-week international sculpture symposium in China. Its cohosts were a steel factory near Tangshan, the center of the country's steel fabrication industry, and a nearby university sculpture program. Participants, who came from countries with a history of steel sculpture making, were given access to a huge pile of scrap metal. Mack made an abstract work more than three meters tall; it's permanently sited in the public sculpture park that the factory built to display the participants' creations.

Mack's insights on race and rural artists are in demand, too. On March 11, he'll join Juniper Creative artists Will Kasso Condry and Jennifer Herrera Condry in a Zoom panel titled "Being a BIPOC Artist in Vermont." Holt organized the event as part of the Spruce Peak exhibition.

"I'm excited," Mack said. "It's nice to have an opportunity to share an uncommon story. The stories that are promoted in this country about artists of color aren't typically rural. We only hear about Black people existing in cities."

Rachel Moore, executive director and director of exhibitions at Helen Day Art Center in Stowe, included Mack in a late 2019 show of six Black artists' work, "Unbroken Current." She hung his "Revival Lineage" — a pair of spades with forged faces — from a hook beside a quartet of tinted slave portraits by the nationally known juggernaut Carrie Mae Weems.

Moore sees a difference between Mack and artists like Weems, whose work is pointedly about race. "Weems' piece ... cuts right through to the heart of what she's trying to say about this bigger issue in history, but immediately that can kind of bring you to your knees. Then you have Harlan's work," she said. "Not all of it is overtly about his identity as a Black artist. To me, looking at ["Revival Lineage"], it's about his experience as a human being, as an artist, a maker, a Vermonter, a son."

"Every time he was on-screen, I felt like I knew him," Holford recalled. That connection only increased after she met him in person, she added: "I've worked literally all over the world, and Harlan is — this is nothing to do with age — he has so much experience and can read people well and accept them where they are, with a loving kindness.

"There's always a gracefulness to his work," Holford said, "and to him, to be honest."

Harlan Mack's work is on view at Whirligig Brewing in St. Johnsbury until further notice; the Open Air Gallery Ski & Snowshoe Trail at Highland Center for the Arts in Greensboro through March 31; and "Looking Outward" at Spruce Peak Arts in Stowe, through March 31. Learn more at harlanmack.com.

The original print version of this article was headlined "Forging Ahead | From painting to sculpting to blacksmithing,Harlan Mack's artwork relays a worldview"