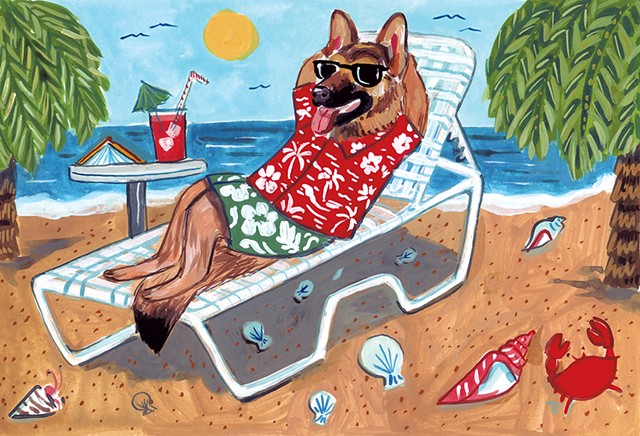 Before Vermont lawmakers voted to allow adult marijuana possession, cops and prosecutors routinely weighed in, saying that they rarely pursued criminal cases for people found with pot. But as the July 1 legalization date approaches, authorities are realizing that legal weed will have an enormous impact — and some unintended consequences — for law enforcement.

Marijuana is often a gateway drug that enables cops to justify searching people and cars. Those investigations often lead to unrelated charges such as possession of controlled substances or driving with a suspended license.

It will still be illegal to drive under the influence or possess large quantities of pot. But no one is sure whether things police commonly notice — a whiff of weed, a pipe or crumbs of marijuana — can be considered signs of illegal activity.

"The law is unsettled," said Rick Gauthier, executive director of the Vermont Criminal Justice Training Council, which certifies cops and sets training standards. "But I suspect those kinds of searches likely won't happen."

Prosecutors and judges will ultimately decide whether cases using such evidence can proceed. But police fear that they will lose an important tool and be forced to let criminals go free.

"That's the booger in all of this," said Colchester Police Chief Jennifer Morrison, who is also the president of the Vermont Association of Chiefs of Police. "A lot of times, our interdiction work starts at roadside stops with the odor of marijuana, and very frequently, we find other drugs — heroin, meth, cocaine. It remains to be seen what the impact will be, [but] we're concerned, and we're going to be looking for guidance."

Critics note, however, that police have also used marijuana as a pretext to conduct illegal searches.

Last year, former Burlington police officer Christopher Lopez was charged with perjury after being caught on camera admitting that he lied about the smell of marijuana coming from a vehicle in order to justify a search. Prosecutors subsequently dropped 14 other criminal cases that relied on Lopez's testimony. In many of them, Lopez conducted searches after he claimed he could smell pot. Lopez resigned.

"We want law enforcement to get with the times and stop treating marijuana as a justification to conduct invasive searches," said Jay Diaz, a staff attorney with the American Civil Liberties Union of Vermont. "They should let it go and stop being drug warriors for what is going to be a legal substance."

The ACLU on Monday filed an appeal to the Vermont Supreme Court on behalf of Gregory Zullo, an African American who alleges in a lawsuit that a former Vermont State Police trooper racially profiled him during a 2014 traffic stop. Lewis Hatch pulled Zullo over because snow partially covered his license plate. Hatch later claimed he smelled marijuana. When Zullo refused to grant Hatch permission to search his car, Hatch had the car towed, forcing Zullo to walk eight miles home. No charges were ever filed.

Documents showed that Hatch, who was eventually fired, had previously searched African Americans under similar circumstances. On one occasion, Hatch strip-searched two black men whose vehicle, Hatch said, smelled of marijuana. He found no drugs.

Cahill compared pot to alcohol. A police officer who spots a six-pack of beer in a car needs more evidence to justify searching it or to suspect the driver is under the influence.

"[Legalization] turns the existing practice of considering marijuana as contraband upside down," Cahill said. "It's going to require some new investigative techniques."

Police officers will also be deprived of key allies: their drug-detecting canines.

The dogs are trained to "alert" — which usually involves lying down, pawing or barking — when they smell drugs. That behavior helps police legally establish probable cause to believe that a crime has been committed, allowing officers to rummage through cars and conduct more invasive searches.

But most police dogs weren't trained to differentiate between drugs: There is no way to know whether a bark is for heroin or for marijuana. Once pot is legal, an alert would have little chance of holding up in court, prosecutors and police said, and any evidence it led to would likely be dismissed.

"If I were a drug dealer, once marijuana is legalized, if a dog is going around the car and hits, the first thing I'd say to an officer is, 'Oh, yeah, I've got some marijuana,' and show him the bag and get away with the heroin and cocaine in the car," Gauthier said.

His council foresaw this dilemma. Two years ago, the police academy stopped training new dogs to detect marijuana. So half a dozen recent canine graduates don't sniff out weed.

But about 40 older canines on the job in Vermont will likely retire from the drug-search business, Gauthier said. It is apparently extremely difficult, if not impossible, to retrain a dog to ignore the scent of marijuana, he said.

Viper, a Morristown Police Department dog, will retire — from his drug-sniffing duties, anyway. The German shepherd will stay on duty for community relations and to assist with search-and-rescue operations, Chief Richard Keith said. Viper, who is almost 4 years old, helped find a mother and child lost in the snowy woods on Christmas Eve 2016, forever proving his worth, Keith said.

"[Viper] has been very good at locating people and, as far as I'm concerned, if that's all we have him for, that's fine," Keith said.

While law enforcement officials grapple with how to handle future marijuana cases, some Vermont lawmakers are pondering whether to revisit old ones.

"They should ... stop being drug warriors for what is going to be a legal substance." Jay Diaz tweet this

Criminal records make it difficult to get housing, jobs and student loans. People shouldn't continue to suffer consequences for an offense that will no longer be illegal, according to Robert Sand, director of the Vermont Law School's Center for Justice Reform.

"When a person has paid their debt of a criminal conviction, that should be finite," Sand told the House Judiciary Committee last week. "They shouldn't have to keep being saddled with the conviction. [The bill] also recognizes that we're looking at marijuana in a new light."

Under the proposed law, defendants would have to petition the court for expungement, and prosecutors could object. Officials are unsure how many people would be eligible under the bill.

Vermont would not be the first state to take such a step. A bill progressing in the California legislature would require courts to automatically expunge records of marijuana convictions for actions that are legal there today. California's 2016 voter referendum that legalized marijuana made the law retroactive, allowing residents to pursue expungements.

Advocates in Vermont note that there is local precedent. In January 2017, then-governor Peter Shumlin pardoned 192 defendants with convictions for marijuana possession.

The bill's prospects are unclear. Committee chair Maxine Grad (D-Moretown) and two other committee members sponsored the legislation, and it has some key support. The Department of State's Attorneys and Sheriffs has signed off, and George said she has discussed setting up an expungement clinic with Sand to help people in Chittenden County wipe their records clean.

But the bill was filed late in the session, and Grad was unsure whether her committee would act before the deadline to send legislation to the other chamber.

"It's something we need to continue to look at as part of the wider reform," Grad said.

Rebecca Kelley, a spokesperson for Gov. Phil Scott, said the governor has no position on the bill — and no plans to issue pardons.