On Saturday, June 25, the Shelburne Museum opens the exhibition "Luigi Lucioni: Modern Light" in its Pizzagalli Center for Art and Education. Anyone who may have seen the online version in recent months should not think, Been there; done that. The in-person show is both more extensive — with 48 paintings, 11 etchings and one plate — and more visually spectacular. In a way, paintings are like friends and lovers: No matter how good virtual or print reproductions might be, an intimate proximity to the original is always better. And for admirers of skillful brushwork, Lucioni is swoon-worthy.

"Modern Light" presents a comprehensive survey of landscape, portrait and still-life work by the Italian American artist (1900-88). Those who possess a passing familiarity with his oeuvre might think of birch trees, barns and other vistas of the Vermont countryside. Indeed, Lucioni came to spend a lot of time painting en plein air in the Green Mountain State, and Shelburne Museum founder Electra Havemeyer Webb was an important patron. In 1937, Vermont Life magazine even declared him the state's unofficial "painter laureate."

For admirers of skillful brushwork, Lucioni is swoon-worthy. tweet this

But first, Lucioni, who was 10 when he arrived at Ellis Island with his mother and three sisters, became a New York City artist. His talent was evident early and perhaps spared him the immigrant's typical fate of factory work. He was schooled at the Cooper Union for the Advancement of Science and Art and the National Academy of Design and won coveted residencies at the Tiffany Foundation. Lucioni was steeped in the city's thriving creative culture — as well as its largely closeted gay community.

Gallerists, collectors and other artists began to take notice of the young realist painter even as his skills evolved alongside — and in contrast to — abstract expressionism. Lucioni's style drew upon historical artistic conventions, and yet he was "recognizably up to date for his mid-century audiences," writes Shelburne Museum director Tom Denenberg in a new book about the artist that accompanies this exhibit.

"At once timeless and timely, [Lucioni] captured the elliptical, even enigmatic, nature of his adopted New England, as well as the pervasive sense of alienation manifest in international creative circles in the decades that bracketed World War II," he suggests in Luigi Lucioni: Modern Light.

In a walk-through of the exhibition last week, curator Katie Wood Kirchhoff pointed to the unpeopled scenes and to a practical "modern" manifestation: telephone poles. Lucioni's Vermont landscapes are masterworks of precision, his lighting incandescent, but he did not shy away from including such commonplace, era-specific cues. An actual telephone, circa 1928, and what appears to be a Campbell's soup can sit on a table in one of his still lifes.

In the book, Denenberg notes that Lucioni disdained categorizations, an attitude that was itself modern. He also cites art historian Bruce Robertson's comment that modernism was not just a "'Manhattan project.'" It was essentially, writes Denenberg, a "response to the rapidly changing conditions of life in the twentieth century." Modernism eschewed the sentimentality of the previous era, as well as "the kinetic embrace of the Impressionists. They were replaced, in Robertson's words, by a 'certain stillness.'"

If Lucioni shared similarities with contemporaries such as Andrew Wyeth, Rockwell Kent and Edward Hopper, two other influences shaped his unique approach to the canvas.

"He had studied printmaking," Kirchhoff said. "His works definitely depend on line." (And at times, Lucioni's livelihood depended on his ability to make and sell prints.) 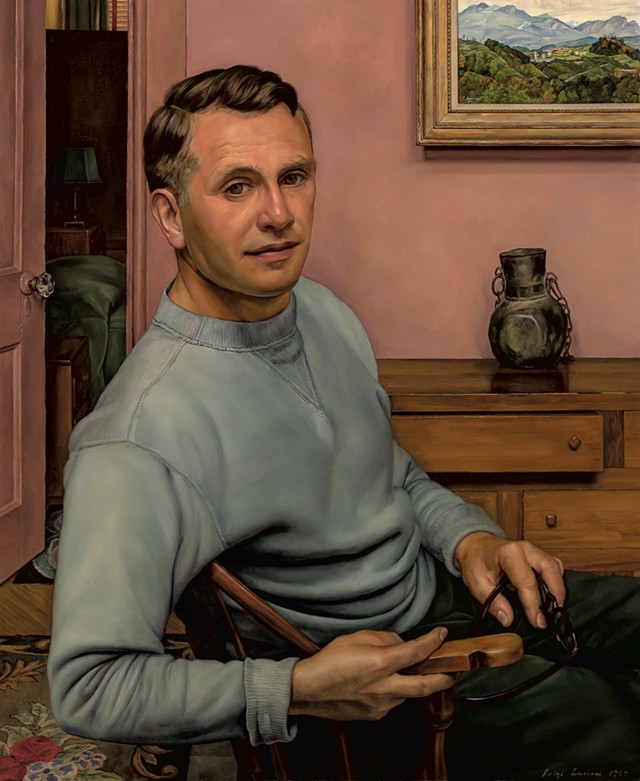 Significantly, Lucioni absorbed his European artistic lineage during several trips back to Italy in the late 1920s. There is something of the Renaissance in this 20th-century American modernist-realist. Observing a pair of his still lifes several years apart, Kirchhoff noted the evolution of Lucioni's attention to the smallest details, the growing veracity of his brushstrokes. He even subtly perfects imperfection, as it were, such as replicating the bruises on fruits.

In her own essay in the book, Kirchhoff cites an early 20th-century critic named Frank Crowninshield, who was enthralled by the confluence of Lucioni's Italian and American artistic sensibilities. "He seems to see the world through the eyes of his ancestors, but conveys his impressions of it in the conventions of his contemporaries," Crowninshield wrote in 1928. He also lauded Lucioni's "fresh and assured use of colour."

A stunning example of the latter distinguishes Lucioni's "Portrait of Ethel Waters," from 1939. The popular singer of concert and Broadway renown is wearing a vivid red dress, in contrast with the chartreuse drapery behind her. Lucioni posed her looking to one side, away from the viewer; her face is unsmiling, her arms crossed against her waist. The painting's resplendent colors fairly leap from the canvas, yet it is Waters' inscrutable expression — of resignation? sorrow? — that holds the gaze. It's hard not to think that even fame and glamour didn't shield Waters from the realities of being Black in America.

Two other portraits in the exhibition — of fellow painters Jared French and Paul Cadmus — speak to Lucioni's involvement in the gay community. But while those two men were public about their sexuality, in life and in their artwork, Lucioni remained more discreet. Kirchhoff admitted to some misgivings about outing the artist now, given that he had never done so himself.

In the book, however, contributing writer David Brody devotes an essay, titled "Coded Portraits: Lucioni's Queer Circle," to the work and interactions of these artists in a historical period of extreme homophobia. Lucioni's 1930 portrait of French might be a straightforward representation, "yet given the nature of their relationship, the portrait becomes more intriguing," Brody writes; "it is as if Lucioni devised a tribute to his relationship with this handsome young artist through paint."

"Resting Athlete (Amateur Resting)," from 1938, is more ambiguous and more suggestive. It's not quite a portrait, as the sleeping figure, clad in shorts and socks, is prone, his face turned away from view. Lacking contextual clues, we are left simply to marvel at Lucioni's impeccable execution of the foreshortened body, lustrous skin, velvety robe and plaid flannel bedding as the young man dreams.

The original print version of this article was headlined "Modern Love"