From Hiking to Paragliding, Sam Chambers Is the Mad River Valley's Go-To Guide 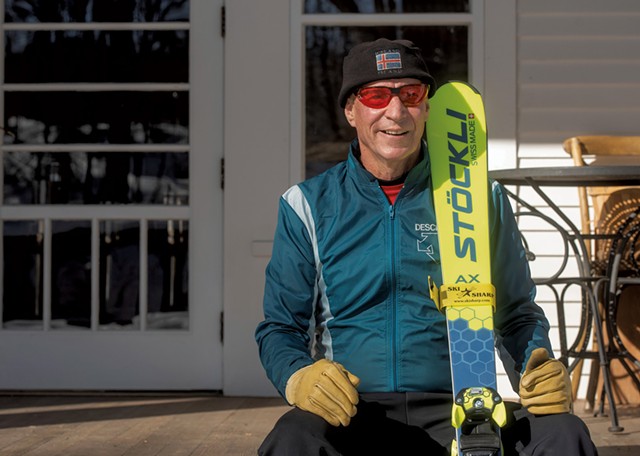 Sam Chambers often has his head in the clouds. While some people might take that remark as an insult, the adventurer and professional outdoor guide in Warren considers it his life's calling. Whether he's leading a group of hikers up Mount Mansfield or teaching someone to paraglide off Lincoln Peak, Chambers loves to gain altitude to elevate his attitude — and those of his clients.

In December, the Pitcher Inn in Warren hired Chambers as its new experience director, which he admits "sounds like I should be at Club Med teaching shuffleboard."

Actually, Chambers is a longtime resident of the Mad River Valley with a knack for finding outdoor activities that his clients might enjoy, then making them a reality. The rustic yet luxurious 11-room Pitcher Inn offers visitors a romantic getaway, as well as gourmet dining second to none. Yet one need not pay $400 to $800 for a night at the inn to avail oneself of Chambers' services. He gets hired out privately all the time.

His menu of adventures is long and diverse to accommodate guests' varying levels of fitness and ambition. In winter, Chambers' professional guidance might involve little more than taking someone ice skating at an outdoor rink in Waterbury or teaching them to skate ski on trails at Ole's Cross Country ski center in Warren.

Chambers might guide more adventurous guests on a day of backcountry snowshoeing or Alpine skiing at Slide Brook Basin, a remote wilderness area in the shadow of Mount Ellen near Sugarbush Resort.

For winter clients more inclined to ride the wind, Chambers can teach people how to snow kite or ski rig, either on a valley field or at Sand Bar State Park on Lake Champlain. A ski rig, he explained, is a contraption with two snow skis canted slightly outward toward their edges for stability, with a wooden boat mounted on top, non-skid foot straps and a windsurfer sail.

"It goes like you wouldn't believe on snow-covered ice," Chambers said, adding that it's not uncommon to sail along at 30 miles per hour across a snow- or ice-covered lake or field. 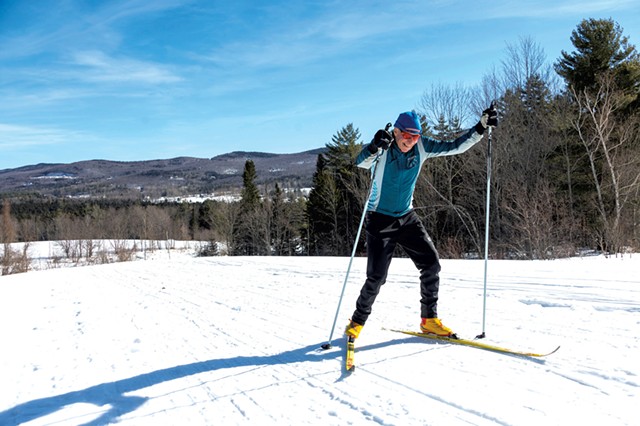 One of his favorite activities is leading horse tours at the Vermont Icelandic Horse Farm in Waitsfield. Chambers grew up on a horse farm in southeastern Pennsylvania and spends many days each year paragliding and horseback riding in Iceland. So he's quite familiar with the small, sturdy and good-natured mountain horses.

Come spring and summer, Chambers' more popular activities include tubing and kayaking on the Mad River, as well as standup paddleboarding on Blueberry Lake, the latter of which he calls "one of the most spectacular mountain lakes around."

Chambers will teach the truly adventurous how to paraglide at Sugarbush — or he'll set them up for a ride with his tandem instructor. Chambers himself doesn't compete in paragliding at the international level, but he's trained top-ranked pilots who compete in the Paragliding World Cup.

Chambers has always made his living outdoors. The 65-year-old has a degree in forestry from Penn State University and another in exercise physiology from the University of Vermont. He first visited Vermont at age 12, then moved here for good in 1976 to ski Mad River Glen, Jay Peak, Sugarbush and other local hot spots.

In the years since, Chambers has managed the UVM ski team, worked as assistant coach of the women's gymnastics team and coached ski racers at Mad River Glen.

To locals in the Mad River Valley, Chambers is also a colorful character with a penchant for storytelling and a commitment to community service.

"He's quite a man about the world," said Suze Edwards, co-owner of Sugar Fish seafood market in Waitsfield. She and her husband, Bob "Skipper" Conrad, plan to offer sailing on Blueberry Lake this summer. A jack-of-all-trades, Chambers is helping them fix up their fleet of small sailboats.

"He's a pretty intriguing guy [with] a lot of depth to him," agreed Mike Murphy of Warren. Murphy was in a bad motorcycle wreck in 1977 in which he lost his leg, spleen and use of his left arm. And yet he still skis and rides motorcycles. He credits Chambers for helping him remain active.

"He's been phenomenal at keeping me healthy and fit through that whole ordeal," Murphy said. As both a personal trainer and confidante, "Sam [gave] me aid whenever I needed it," added Murphy — "sometimes when I didn't even know I needed it."

Chambers refers to that ability to intuit what people need, even when they might not know it themselves, as InnSaei, an ancient Nordic word from Iceland that translates as "to see within."

"When I take people out, I try to intuit what they want. I don't second-guess them," he said.

But Chambers, who treats outdoor excursions as equal parts exercise and meditation, emphasized that his adventures aren't just about bicycling really hard or skiing really fast. If you only do that, he said, you miss so much of the natural beauty of the Mad River Valley.

"Hey, you can push it all you like," he said. In contrast, "I'll be watching for that moose or coyote track. I'll be listening for that bird and tell you which one it is by its sound. I'll tell you what tree that is by its leaves, and what every plant is, and how we eat them, or not."

So where are Chambers' favorite places for finding coyote and moose tracks or gathering wild mushrooms?

"Most of them are hidden," he said. If you want to know where they are, he added with a sly grin, "Come and find me."

The original print version of this article was headlined "Adventure Capital | From hiking to paragliding, Sam Chambers is the Mad River Valley's go-to guide"