From Goats to Greenbelt Gardens: A New Task Force Defines "Farming" in Burlington 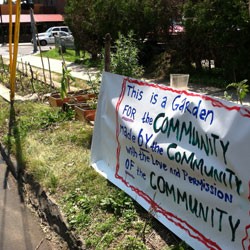 For more than a month, a hand-painted sign sat in front of Joseph Lariviere’s raised vegetable beds in downtown Burlington that read: “This is a garden for the community, made by the community, with the love and permission of the community.”

In June, Burlington police cited Lariviere, 27, with unlawful mischief for refusing to remove his wooden garden boxes from a city-owned greenbelt near the corner of Pearl Street and North Winooski Avenue, across from Radio Bean.

Chittenden County State’s Attorney T.J. Donovan declined to prosecute Lariviere, who could have been hit with a $500 fine. Instead, restitution for his horticultural transgression will be determined by Burlington’s Community Justice Center, according to the Associated Press. Lariviere didn’t respond to numerous phone messages seeking comment.

In June 2005, the Burlington City Council debated a “greenbelt vegetation ordinance” that would have laid out explicit standards for how homeowners and tenants must maintain the grassy land between their sidewalk and the street.

Complaints about neglected greenbelts prompted the measure. Instead of maintaining them, as the current ordinance requires, some residents had let them become weed-choked and overgrown.

But city officials also started targeting beautified greenbelts in neighborhoods where residents had planted shrubs, flowers, herbs and vegetables. A city land manager noted that even well-intended gardens can damage tree roots, pose fire hazards, encroach upon sidewalks or block the view of traffic for drivers, cyclists and pedestrians.

Opposition grew against the proposed ordinance that would have prevented residents from planting anything but grass within the “drip line” of a city-owned tree — that is, the area beneath its canopy. Also, residents would have been prohibited from installing planting boxes, like the ones Lariviere erected, without a permit from the city arborist.

The ordinance withered on the vine. Since then, greenbelt gardens have proliferated, especially in the Old North End, where tillable land is in short supply. There are now more than 100 makeshift gardens throughout the city. In some cases, they complement the 11 city-owned community gardens — which amount to about six acres of tillable land — where more than 1000 residents grow food, according to city land steward Dan Cahill.

Burlingtonians are now raising animals, too. In the spring of 2010, a code enforcement officer cited Old North End resident Will Bennington for keeping too many chickens at his Decatur Street home. Bennington had 10 hens; the city limit is four. Apparently, the four-animal limit was established years ago to differentiate between people who own multiple dogs and kennel operators.

Bennington’s case motivated a coalition of community groups to begin a larger dialogue about cultivating food — animal and vegetable — within city limits. Part of the problem, Cahill admits, is that for years, complaints related to makeshift gardens and animal husbandry in Burlington have slipped through the regulatory cracks because no one city department is charged with overseeing them.

In March, city councilor Bram Kranichfeld (D-Ward 2) sponsored a resolution to create a Burlington Urban Agriculture Task Force. The measure passed, 13 to one. Only Councilor Paul Decelles (R-Ward 7) voted against it.

“It seems like there’s enough interest in town, and people doing a broad range of activities that could come under the heading of ‘urban agriculture,’ and there isn’t really anything in city policy that addresses it,” observes Will Robb, who chairs the new six-member task force.

Robb notes that the city’s Board of Health and Department of Planning and Zoning could have drafted a sensible policy that simply addresses chicken ownership. “But what do you do when somebody shows up with a goat or wants to raise bees?” he says.

At a June 6 public meeting at Burlington’s City Market, Robb and Alison Nihart, a graduate student in the University of Vermont’s Rubenstein School of Environment and Natural Resources, laid out the task force’s overarching mission: to come up with a cohesive urban agriculture policy and “best practices” guidelines for raising food, keeping livestock, producing compost and promoting agriculture in Burlington, from small greenbelt plots to large commercial farms in the Burlington Intervale.

Lariviere’s veggie garden probably still wouldn’t fly based on health and safety concerns. As Cahill points out, it’s inadvisable to raise herbs or vegetables in soil that’s potentially contaminated with lead paint or animal waste. Plus, Lariviere’s greenbelt garden was in front of a commercial property, not his own residence.

But Robb insists the goal of the task force isn’t to create a whole new regulatory framework, just some common-sense rules and recommendations for city residents interested in their own food production and neighborhood beautification.

“We also want to articulate that growing food is an important thing to do,” he adds, “and if people want to be provisioning their households out of what little land is available to them in the city, that we actually want to encourage that.”

Burlingtonians will get a first look at the task force’s preliminary policy recommendations in neighborhood planning association meetings this fall.