From Firepits to Igloos, How to Dine Outside in Chilly Vermont | Staytripper | Seven Days | Vermont's Independent Voice

From Firepits to Igloos, How to Dine Outside in Chilly Vermont

On a 9 degree day in Burlington, Dan Bornstein and his girlfriend took a seat on the patio at Zero Gravity Craft Brewery to drink a couple of beers. The Pine Street brewery has installed electric heaters above the tables in the outdoor space it shares with the Great Northern restaurant.

"I have no problem with it," Bornstein, 28, said of drinking a beer in single-digit weather. "I'm a local and a snowboarder. They have heated seating, too. That's pretty awesome."

Having an outdoor beer on a sunny day is enjoyable — even in winter. tweet this

A Burlington resident who works in transportation logistics, Bornstein said he's staying away from indoor dining establishments during the pandemic. But having an outdoor beer on a sunny day is enjoyable — even in winter.

"We're trying to get out and feel some sense of normalcy," Bornstein added, emphasizing that he wears a mask and maintains social distance. "[And] supporting the local economy is huge."

Northern New England is not the first place you'd pick to dine outside this time of year. Frigid temperatures, snow and wind aren't exactly conducive to settling in for a leisurely meal. 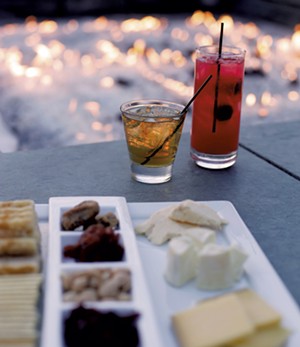 "People bundled up in snow gear and sat out there and had drinks," she observed.

Even with these adaptations, dining out comes with a certain level of risk for coronavirus transmission, according to Tim Lahey, an infectious disease physician at the University of Vermont Medical Center.

The safest way to eat a restaurant meal during the pandemic is to order takeout, Lahey wrote in an email to Seven Days. He rated the risk level of various dining scenarios, from lowest to highest, as follows:

(Lahey also noted that the risk of each scenario could vary depending on factors such as the number of people at the establishment, whether the dining party is strictly limited to household members, and the local incidence of the virus.)

He classified dining igloos as "likely an intermediate risk" and explained why: "Importantly, since we know SARS-CoV-2 can hang in the air for a long time ... there is still risk that new diners could inhale the air just recently exhaled by previous diners."

For those who want to brave the elements for food and drink, here are a few options.

Warm Whiskey on the Patio

On a recent Friday evening as I left our house for a cocktail on the patio of Juniper, my daughter offered this advice: "Good luck, Mom. Don't get COVID or frostbite."

I am pleased to report that I acquired neither on a relatively balmy February evening — 36 degrees — following a brutal cold spell.

As I entered the bar, I gave my contact information to a hostess, then proceeded to the plexiglass-shielded bar and asked for a hot toddy.

I couldn't remember the last time I had ordered a drink at a bar, and it was something of a wonder to watch the bartender at work. I applauded her mixing skills and felt extra admiration for her courage in serving people (including visitors from out of state) in a pandemic. Soon, I was outside on the patio, cupping a glass mug of warm whiskey and bitters.

The outdoor tables were occupied, including by a jolly foursome in one corner and a couple and their goldendoodle at a two-top. In the center of the space, a group of about six people sat in Adirondack chairs around a gas-powered firepit. Standing by the door to the bar, I overheard their conversation about pods and quarantines. Sipping my drink, I gazed at the lights strung around the patio.

When the weather cooperates, such as on the night I visited, people gravitate outside, a bartender told me. The patio has recently acquired space heaters.

S'mores Around the Bonfire 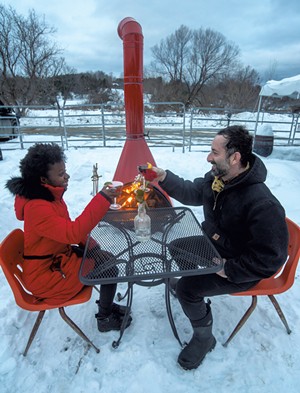 Individual s'mores kits and pre-rolled hemp joints are among the goodies at Zenbarn in Waterbury Center. In its ample outdoor space, stones placed six feet apart around a bonfire function as rustic seats. Space heaters and a wood-burning stove also provide warmth.

Patrons are welcome to eat outdoors at the restaurant, which serves fried chicken and waffles, eggplant masala, and casual pub fare such as burgers, salads, sandwiches and wings.

Folks who want to pop inside to warm up will be treated to live music, a Zenbarn staple that's been kept alive during the pandemic through a fundraising effort. The roughly $8,000 music fund guarantees that musicians will be paid regardless of how many people show up, according to co-owner Noah Fishman.

"We're committed to our artists," he said. "They've sustained us, and we wanted to sustain them, too." The shows, which also can be livestreamed from home, "have been a bright point for us," Fishman added.

He expects that Zenbarn's outdoor space will get more use as spring's milder weather approaches.

Dining in a Dome

According to Jeff Everts, the recently arrived director of food and beverage at the Equinox Golf Resort & Spa in Manchester, outdoor winter dining in Vermont isn't "much of an option." His view is informed both by the weather — the temp hit 3 degrees below zero a few weeks ago — and by his experience at resorts in places such as Phoenix, Los Angeles and Orlando.

"There are not many space heaters that are going to keep you warm [enough]," he said.

Yet for hardy souls, the Equinox presents a few possibilities. Its Falcon Bar has an outdoor area furnished with a gas-powered firepit. More than a dozen stools ring the pit, making it a suitable spot for a cocktail or a cup of hot chocolate. And diners can carry food from the indoor restaurant outdoors, Everts said.

The resort also has a pair of heated dining igloos, which come with a two-hour rental fee of $200. The price includes a charcuterie board for four people and a choice of wine or beer.

At Stowe's Spruce Peak, high up the Mountain Road, the Mansfield Terrace is the site of five plastic-covered dining domes with table service. The rental fee for 90 minutes is $50 Monday through Thursday and $100 Friday through Sunday, not including food or drinks. Blankets are provided for especially chilly days. Sushi is the featured menu item, though fondue and s'mores are available, too. Diners can watch skiers ride by in the chair lift, ascending the slopes.