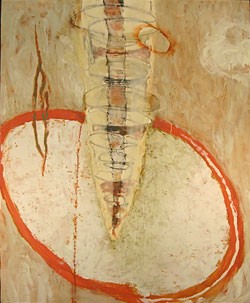 When you enter the front room of Burlington’s 215 College Gallery, the first thing you see is a small, crumbling house seemingly made of cinder blocks and situated under thin, fallen trees. Featured artist Linda E. Jones created the sculpture, inspired by a Haitian tomb, in the late 1980s. After exhibiting it at that time, she stored the work outside under a tarp for more than 20 years. Jones had nearly forgotten about the little house when she rediscovered it shortly after the Haiti earthquake in January. For the artist, the work took on new meaning, symbolizing the Haitians’ loss of shelter, safety, structure and life.

The two rooms of Jones’ exhibition hold distinctly different works, yet themes link them. Destruction and the potential for healing are strong undercurrents in both the Haitian tomb installation and the digitally based works that surround it. The latter originate in the artist’s son’s MRI scans following a sports injury. In “Deciphering the Code I (Assessing the Damage),” an internal image of the body looking down from the shoulders, a bright cyan background lurks beneath bright white ovals (ribs) that frame a swirling plasm of blue, blob-like forms.

In places, Jones painted looped groups of swirling red lines. To the right of the ghostly white spinal column, what seems to be a highlighted rectangular section features one organ colored black and pink — perhaps the “damage.” The MRIs are medical and detached, yet strangely intimate. They reinforce the physicality of the patient and the viewer, suggesting both our individuality and sameness.

Perhaps because these are internal scans of a person intimately related to the artist, her painterly additions to them can give the sense of wringing hands; of an anxious person waiting for news of her loved one. The marks jump and flutter around the damaged body, coupling an artist’s fascination with color and form and a mother’s fear. Together with the Haitian tomb, the works suggest the artist’s desire to ease the pain of others. They are tender, yet sharpened by the knowledge and fear of loss.

A different series of Jones’ works picks up themes of death and regeneration. She found a log in the woods, broken open with a flat, white, disc-like fungus growing inside a narrow crevice along its length. The image inspired her; two works in this exhibition draw on the conical shape filled with stacked white discs.

The first, a nearly three-dimensional wall-mounted work built into a thick wooden panel, seems to be a direct physical representation of her find. Jones drew a tree-bark-like texture over the surface of the panel and carved into it to create the funnel with stacked fungi inside. The fungi stand out several inches from the surface. The nubby wax material used to create the white discs is grotesque, while the waxed-rice-paper sheath surrounding them has an unnervingly transparent, skin-like texture. A brush stroke of red paint weaves over and under the wood-grain drawing, adding formal strength to the piece while obscuring its otherwise representational veracity.

Nearby, an almost equal-sized drawing of the same subject on panel succeeds with nuance and elegance where the more direct piece explains too much. The drawing, “Fungus Tree,” is textural and richly wrought. The surface is scumbled, rubbed, brushed and layered with marks that reinforce the organic originality and beauty of the conical shape and composition of the companion piece. The red circle recurs, only here it is dynamic and strong, its relationship to the shape of the fungi an almost joyous celebration of the cyclical decomposition and regeneration the fungi may symbolize.

Jones’ simplest work is her strongest. The paintings, the most eloquent translation of her experience, communicate her skill with material and imagery, and her resonant empathy for the world’s varied organisms. The Haitian tomb, the MRIs and the strangely regenerative fungi seem at first unrelated, yet each points to the essential connectedness of living things and our shared experience of brokenness and healing.