From Bullets to Books 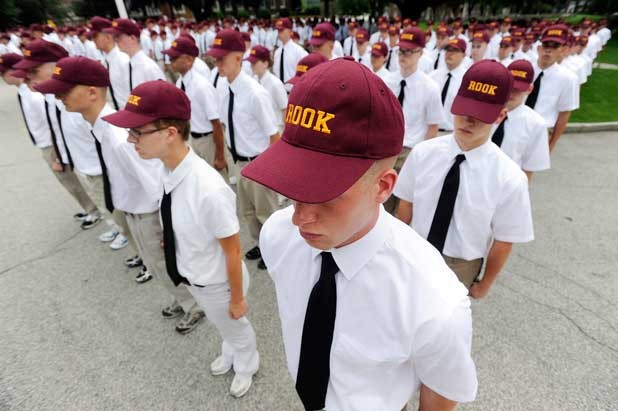 Consider what it’s like for the tens of thousands of U.S. combat veterans who recently returned from Iraq or Afghanistan and are now entering college. They’ve spent months kicking in doors, dodging gunfire and roadside bombs, eating MREs and seeing their friends and comrades get wounded or killed in action.

Then they arrive on a college campus and hear their fellow students bitching about the quality of the cafeteria food, the size of the dorm rooms and the hardship of waking up for 8 a.m. classes.

As one combat vet tells me privately, “When I hear that, I think, Someone cooked that food for you, it’s hot, and it doesn’t come in a brown plastic package that was dropped out of an aircraft. This is good eating!”

Aaron Botenhagen can relate. The 26-year-old Marine Corps sergeant from Big Bear Lake, Calif., did two tours of duty in Iraq between October 2005 and May 2007 before returning to college at Norwich University. He’s now a junior studying architecture there.

“I was just like the kids I see here every day before I joined the Marines,” Botenhagen says without a hint of condescension. “But when I come back here and hear them complain that their mom and dad didn’t buy them this or that, your eyes are really opened to how great this country is and ... how much we take for granted.”

Though Botenhagen’s much younger peers can’t match his life experiences, they probably have a better appreciation than most college students of what military life is like. As students at the nation’s oldest military college, most are enrolled in the Reserve Officers’ Training Corps and plan to enter the service themselves on graduation.

And they’ll get a sense of what to expect from their classmates. Botenhagen is one of 110 veterans returning to or starting college this fall at Norwich. That number includes 17 freshmen, part of Norwich’s largest incoming class in more than three decades. Nearly all those vets are attending college under the new “Post 9-11 Educational Assistance Act,” which was signed into law last year.

The Veterans Administration (VA) estimates that by 2011 more than a quarter-million U.S. service members will have enrolled in college under the new GI Bill, the most generous educational assistance program for vets since FDR signed the first one in 1944. The bill gives all U.S. veterans who’ve served on active duty since September 10, 2001, including National Guardsmen and reservists, the option of receiving an in-state undergraduate education at little to no cost. The program also offers vets monthly housing stipends, annual book allowances and fees for other educational programs and tutorial services.

Moreover, the privileges of the new GI Bill can be transferred to the dependents of veterans. This new provision reflects the recognition that many service members have already attended college by the time they’re deployed, but may not be able to afford it for their spouses or children.

The dollar amount of veterans’ tuition assistance is based on the length of their military stint and their home state’s highest in-state undergraduate tuition. Here, that’s tuition at the University of Vermont. Eligible Vermont vets can claim up to $488 per credit hour, or a total of $2511 per term. Those fees, which the VA pays directly to the institution, can be applied at any qualifying college or university in the state, public or private.

In response, Vermont’s colleges and universities have begun gearing up for a surge of incoming student-soldiers. Administrators say these students bring to the classroom very different life experiences from the average undergrad, as well as unique challenges for the institutions, ranging from housing requirements to mental-health services. Several Vermont schools, including Norwich, UVM, and the Community College of Vermont (CCV), recently designated staff members for the job of making their schools more “vet friendly.” This means helping vets navigate the college bureaucracy, apply for financial aid and deal with other difficult transitions to civilian collegiate life.

Joyce Rivers serves as the veterans’ advocate in Norwich’s Veterans Affairs Office, a post created just a few months ago. Back in 2003, Norwich saw between two and three dozen of its undergrads deployed to Iraq and Afghanistan. Even at a university renowned for its vet friendliness, Rivers says, “Their return to campus wasn’t as seamless as we would have hoped.”

One of the biggest challenges vets are facing now, she explains, is the enormous backlog of GI Bill applications pending with the VA. Because of misinformation circulating among service members, many vets didn’t realize they could submit their applications before the new law took effect on August 1. As recently as two months ago, the VA had received only about 80,000 of the estimated 350,000 applications it expected. Today, that number has jumped to 250,000.

As a result of the log jam, many colleges and universities don’t expect to get paid for the fall semester before November or December. Fortunately for vets, many schools plan to allow them to register for classes, even if their applications are still awaiting approval.

Another frequently reported problem is the VA’s less-than-user-friendly website. “For someone who’s suffering post-traumatic stress disorder or just having a hard time transitioning back to home and school,” Rivers notes, “to then ask them to spend 15 hours wading through that website is just too much.”

CCV is another institution that’s expecting a large influx of veterans. With 12 campuses statewide, it serves scores of Vermont Guardsmen who can continue to live and work in their home communities while earning their degrees. Penne Ciaraldi, CCV’s northeast regional director, recently took on the task of making the college more vet friendly, a job she describes as “brand-spanking-new to me.”

Although numbers are hard to come by right now, Ciaraldi estimates that CCV will see a 30 percent increase in the number of vets who enroll, from 122 students last semester to about 150 this fall. She expects that number to climb even higher once the soon-to-be-deployed group of Guardsmen returns from Afghanistan late next year or in early 2011.

Ciaraldi also serves as the college’s ADA (Americans With Disabilities Act) coordinator. The job has a natural overlap with veterans’ issues, such as traumatic brain injuries and PTSD, which are already “on her radar.”

“A number of veterans will come back and be just fine,” she says. “But we’re also expecting a certain number of students who will be needing to access our disability services.” A big challenge there, she adds, will be encouraging returning vets to access the help available to them.

Norwich’s Rivers echoes that sentiment. Although the Northfield university has an excellent counseling center, she says many active-duty military personnel hesitate when it comes to accessing those services. “The perception out there is that if I seek help for psychological reasons, I might be disqualified [for an officer’s commission] or lose my security clearance,” Rivers says. “It’s a false perception that the service is actively trying to change.”

UVM doesn’t yet have an office of veterans’ affairs, but Chris Lucier, vice president for enrollment management, hopes to change that. Several months ago, he says, UVM launched its veterans’ affairs website. Lucier, himself a 21-year Army veteran, serves on a newly created veterans’ affairs advisory group that meets quarterly.

So far, he says, UVM has identified about 60 veterans on its campus, two-thirds of whom have served in combat zones. Aside from the challenges they face returning to civilian life, many — including some undergrads — arrive on campus with spouses and children. This raises a whole new set of housing issues for a university that has long served a traditional — i.e., 18- to 21-year-old — undergraduate population.

“The good thing, though, from my perspective, is that we’re creating a more diverse educational community,” Lucier notes. “Vets have a unique perspective and have something unique to share in the classroom — their discipline, their organization, their maturity. It’s a population we want to do more for and continue to attract.”

Penny Howrigan, associate dean of enrollment services at Johnson State College, says she expects another semester or two to pass before JSC sees the same increase in veterans’ applications that other Vermont schools have experienced. But her recent experience with one combat veteran applicant left her impressed.

“I’ve got to say, the guy is one of the most organized applicants I’ve ever seen,” Howrigan says. “He called me twice from Iraq ... just to get his financial aid in order.”