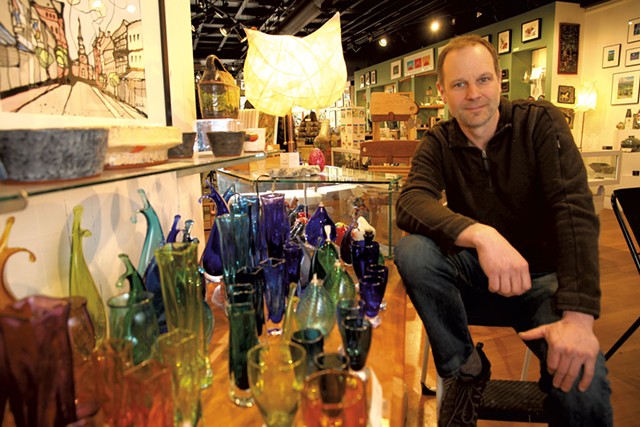 On a recent afternoon at Frog Hollow Vermont Craft Gallery in Burlington, director Rob Hunter pointed out things he had built or helped refurbish: shelves, fixtures, display tables and even a wide gallery partition that doubles as storage space. In 2012, he and Burlington artist Aaron Stein tackled the gallery's beaten floor and managed to demo a pesky odd pillar in the process, opening up the space.

This "tour" is a keen indicator of Hunter's hands-on, down-and-dirty style of leadership. Now, after eight years of serving the venerable Vermont nonprofit, he will step down at the end of April.

Hunter, 48, who announced his resignation to the organization's board in a March meeting, certainly seems to be leaving on a high note. Many, including current and former board presidents Carol MacDonald and Brad Rabinowitz, credit Hunter with resuscitating Frog Hollow when it seemed to be on its last legs.

"[Rob] really came in and just dug in and got the gallery back up on its feet," said MacDonald, a printmaker based in Shelburne. A Frog Hollow artist since 2003, she joined the board in 2009 and took the role of president in 2016.

Founded in 1971, Frog Hollow was named the country's first state craft center in 1975. Until 2008, its reach included three galleries, in Manchester, Middlebury and Burlington, as well as educational arts programming in Manchester and Middlebury.

Over the decades, however, the once-thriving organization faltered. Financial stressors, exacerbated by a broadened artisan economy — both on the ground in Vermont and online — and by the Great Recession, put Frog Hollow in considerable debt. The Manchester location closed in 2008, followed by the Middlebury one in 2009.

Hunter first joined the organization as the Middlebury gallery manager from 2005 to 2008. He left that position to work at the G2 Gallery, devoted to nature and wildlife photography, in Venice, Calif., but returned to Vermont in 2009 to be with now-wife Kathy Boyer. Shortly afterward, Hunter received a call from longtime Frog Hollow bookkeeper Beth Davis with an appeal to return as director. He agreed.

Hunter recalled that, when he started in January 2010, the organization was carrying about $600,000 in debt. It was so cash-strapped that there were no lights on in the back of the gallery.

Still, Hunter was up for it. "When I came on," he said, "everything had been broken down, and we had to rebuild." But, he continued, "There's great opportunity that comes when you have no hope. I had so many ideas that I wanted to put in place from my previous experience [at Frog Hollow]."

"Board meetings with Rob were like one idea after another — it was almost comical at times," said Rabinowitz, who served as board president from 2009 to 2016. "But he had the energy to pull these things off."

One of Hunter's immediate priorities was scrapping a decrepit website; another was replenishing the trust and goodwill of the artisans with whom Frog Hollow works. Early in his tenure, he initiated a series of community lunch potlucks around the state, gauging artists' sentiments and asking about their needs. "It kind of set the tone: We're here to work with you," Hunter said.

"His greatest asset, really," said Rabinowitz, "was that he excited a lot of people around the state to be involved in Frog Hollow."

Hunter also restructured the gallery's jury process, which he said "seemed harsh and really intimidating." Instead of 30-minute jury interviews, Hunter instituted an online application process that would lead to 30-day exhibitions and open-ballot-style feedback for artists under consideration.

"I always want to do right by the artists, and that's almost to a fault," Hunter admitted.

Frustrated by the lack of funds available to craftspeople, he was instrumental in allocating membership fees to launch Frog Hollow's first-ever grant program. Now finishing its second year, it has distributed nearly $17,500 among 16 artists.

Other notable accomplishments include spearheading inventive exhibitions and programming, from temporary and mobile exhibition spaces to documentary video. In 2012, Frog Hollow temporarily expanded to a satellite space on Cherry Street in Burlington to host "Five," an exhibition of works by apprentices to Sabra Field, as well as a retrospective of ceramic artist Robert Compton.

In 2016, the organization launched its cART, a mobile craft demonstration unit that hosts local artists on Church Street. And, since 2012, Hunter has eagerly fostered a relationship with Burlington's Regional Educational Television Network (RETN) that has led him to dive into filmmaking himself. His first completed short, on furniture maker David Hurwitz, is one of many episodes in the series "The Artists of Frog Hollow," available online. Last year, several of those early films joined newer works for the Vermont PBS series "The Frog Hollow Green Mountain Artisans."

After what seems like eight years of constant motion, Hunter said, he's ready for something "drastically different." For him, that means digging deeper into his family's Monkton homestead and joining nearby Peterson Quality Malt to help expand the business, which provides malts to Vermont brewers and distillers. "There's not many jobs in Monkton you can walk to," he joked.

"Things were becoming routine, and I don't think that's good for the organization," Hunter said of his decision to leave. "I adore Frog Hollow so much — this is really out of wanting the best for [it]."

Currently, MacDonald said, Frog Hollow is seeking a new gallery manager to replace Meredith Mann; it is not yet actively seeking a new director. But Hunter has an idea of what sort of person should fill his shoes. "I'm an in-the-trenches kind of guy," he said, "but I think we're to the point now where we need someone who is a strong fundraiser."

Hunter recalled that when he first came on, Rabinowitz asked him to "just get us to May." "It took me eight years," Hunter said, smiling as ever, "but I got them to May."