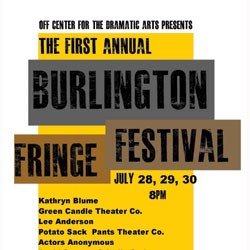 When you come into the world with a festival, what to do on your birthday? Throw another festival and up the ante, of course. That is, if you’re Off Center for the Dramatic Arts.

“We were talking about how to celebrate our first anniversary,” says John D. Alexander, who founded the Burlington black-box performance space with Paul Schnabel, Stephen Goldberg and Genevra MacPhail. When it opened on June 2, 2010, he notes, Off Center presented a four-night, 16-performer “Switch On Festival.” That title “was specific to a beginning,” says Alexander. “We thought, Why not retain the format but leave the name behind us and initiate a Burlington Fringe Fest?”

Why not, indeed? While the Edinburgh Festival Fringe in Scotland is the most famous, fests the world over have adopted that moniker and the accompanying edgy, freewheeling sensibility. Beginning next Thursday, July 28, Burlington will have a Fringe of its own — “the first annual,” declares Alexander optimistically. The Queen City has a lively theater community with numerous small groups, he points out, “so that really lends itself to this format.”

To put together three nights with four shows each, Alexander says, Off Center “reached out to many of the people who performed last year and throughout the year,” as well as some new ones. The lineup includes a newish group called Potato Sack Pants Theater Troupe, which Alexander calls “side-splitting, tears-running-down-cheeks funny”; established ones such as Green Candle Theatre Company; and solo performers such as new-vaudevillian comic Woody Keppel and eco-activist actor Kathryn Blume. Off Center’s principal actors will stay behind the scenes at this year’s fest. “We were going to perform if we couldn’t fill it, but we did easily,” says Alexander, who will stage-manage.

That precisely illustrates Off Center’s raison d’être: to provide “a professional, dedicated performance space at an affordable price” to any and all who need it, and in so doing to support a theater scene. “The place has been pretty busy, and we’re still in business,” says Alexander. “I don’t know of any [other] theater company that relies solely on ticket sales.”

Those who haven’t been to the venue in a while — especially actors — will notice a few improvements. “We secured the kitchen, office and dressing room, and we’ll be selling concessions for the first time,” says Alexander. “We’ve also redone the sound booth.” For those who still can’t find the place, tucked into the long building at 294 North Winooski Avenue (which also houses the North End Studio and CCTV), “we’re going to make a card for distribution with the map and directions.”

Oh, and did we mention the Fringe Festival is a benefit? “We’re a nonprofit, and we’ve met that goal,” Alexander quips. “None of us is getting paid, but we knew that would be the case going in.” Off Center’s latest fundraising drive is aimed at financing a new projector with retractable screen — for hosting film nights — new signage, a redecoration of the expanded space, furniture for the dressing room and new theater seats. “Audience comfort and aesthetic is what we’re going for,” says Alexander. Bravo.