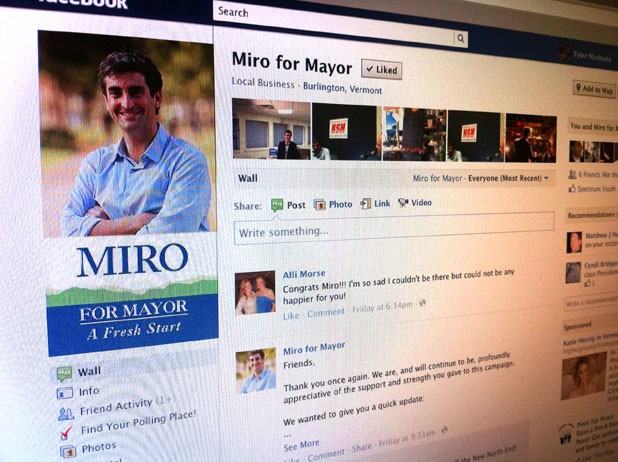 Miro Weinberger’s landslide 20-point win in the Burlington mayoral election took many voters by surprise. But in one crucial arena, Weinberger held a decisive lead from the start: social media.

In internet time, the three years that elapse between Queen City mayoral elections are an eternity, and you could argue that this was the first such election in which social media really mattered. In 2009, independent mayoral candidate Dan Smith garnered praise for his tech savvy and social networking efforts — but Facebook was just branching out from its role as a college networking site, Twitter was still a niche product and Smith finished in a distant fourth place. (In 2012, Smith endorsed Weinberger.)

In a phone interview, Weinberger says that social media played a “very significant” role in his victory. “We believed from the start that it would be an important part of the campaign,” he says. It wasn’t the only factor responsible for the win; Weinberger had significant traditional advantages, including a superior voter identification effort, fundraising dominance and organizational support from the state Democratic party. But to be sure, a powerful social-networking presence helped the previously unknown Weinberger build name recognition and compete with his opponents’ more established, traditional networks.

For most of the race, Miro practically owned Facebook. He targeted Burlington users of the site, spending $7000 on ads before the caucus and another $5000 before Town Meeting Day. He led his three Democratic opponents by more than 200 “likes” during caucus season and had 1500 total on Town Meeting Day — more than three times as many “likes” as Kurt Wright. (Wanda Hines created neither a Facebook page nor Twitter account for her campaign; she garnered just 5 percent of the vote.)

Weinberger jumped into Twitter early, blasting out tweets from his @MiroBTV account even before declaring his candidacy. Wisely, Weinberger did his own tweeting for much of the campaign, although “Team Miro” took over some Twitter duties late in the game. Jason Lorber already had a Twitter audience for the legislative updates he made as @VermontJason, but he was unable to translate that into momentum in the mayor’s race — perhaps because his campaign made most of its mayoral updates from a different, new account, @BTValues.

Weinberger’s investment in social media earned him more than just name recognition; it brought in cash. Weinberger says that a trio of online fundraising drives, promoted via Facebook and email, raised $35,000.

The viral nature of social media means a candidate is never wholly in control of his or her online presence. Weinberger’s “Mirocialite” team of campaign staffers and supporters boosted his visibility daily by tweeting links to his much-vaunted plans or key endorsement statements, while rushing to the campaign’s defense when others criticized him. On Facebook, Miro backers supplemented content from the campaign itself with posts of their own, professing their support. According to statistics provided by the Weinberger campaign, about 12,000 people read a Facebook post with Miro’s name in it in the week leading up to the election.

It helped that Weinberger, with his liberal social views and entrepreneurial, business-friendly spirit, largely fit the profile of the iPhone-happy young professional — Weinberger called them “creative economy types” — who are the lifeblood of Burlington’s social networks.

The importance of social media wasn’t lost on Kurt Wright. His campaign team produced a series of YouTube clips featuring endorsements from local community members, as well as footage of the candidate responding to questions posed via social networks. And Wright’s volunteers were committed to live-tweeting mayoral debates. But these efforts weren’t enough to override Wright’s self-professed lack of tech know-how. More importantly, they failed to engage Burlington’s social media crowd as effectively as Weinberger did.

At one debate, Weinberger pointed out that he was the only mayoral candidate who owns a smartphone. Wright responded that voters wouldn’t cast their votes based on what kind of phone a candidate uses — and he’s probably right. And web savvy alone doesn’t guarantee victory these days — take, for instance, democrat Phil Hammerslough, who peppered his campaign literature with references to the honey badger YouTube sensation, and Sean Hurley, an entrepreneur whose company Hearforward helped craft Weinberger’s digital strategy. They both lost in city council races.

But as Burlington’s economy increasingly relies on creative, tech-focused businesses and relatively young entrepreneurs, future Queen City candidates would be remiss to ignore the digital realm. An active, personal presence in online social networks could be as important as canvassing neighborhoods and eating at Handy’s.

Then again, who could have imagined in 2009 what this year’s election would look like? By 2015, we might well be talking about which candidate has the best Pinterest boards.