Where has the prickly pundit been? 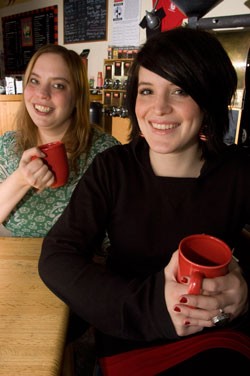 After he stopped writing his weekly political column for Seven Days last June, Peter Freyne found a regular, less stressful ritual at Speeder & Earl’s on Pine Street in Burlington. “He came in two or three times a day . . . for a bottomless cup of coffee, and usually a New York Times,” recalls barista Paula Sperry, 29. Though the former journalist could be “prickly,” she says, “for some reason, we had a really good connection. We’d talk a lot.”

“Paula was definitely his favorite,” manager Marie Claire says of Freyne, who beat cancer before he retired his popular “Inside Track” column. Parked at “his” table by the window, next to the drink cooler, he “got to know all the other people here, too. It was like he worked here, except he didn’t get paid. He wasn’t just a regular; he became a friend to everybody.”

Of course, 59-year-old Freyne, who lived alone, had no idea that all that coffee and conversation would literally save his life. When he failed to show up at Speeder’s for four consecutive days in September, Sperry did something no barista at a national chain would be likely even to consider: She noticed. She worried. And then she took action.

She and Claire found Freyne in the phone book. When their calls to him went unanswered, Claire ventured to Freyne’s Hayward Street apartment with another employee. “We knocked on his door and peered through the windows. We were about to give up when I saw him sitting in a chair, in a dark room, and I saw him move his arm. So we knew he wasn’t dead,” she recalls. “But if he was alive and not answering the door, something was amiss. That’s when I came back here and called Seven Days.”

After getting her call, Cathy Resmer and I did our own exterior search of Freyne’s place, noting the car in the driveway, the day’s mail still in the box outside. We peered in the windows, too, but didn’t see Peter. Cathy got the landlord’s name off his mailbox before we returned to the office, on a Friday afternoon, and called the cops. Some time over the weekend, the landlord called Cathy to say he had let himself into Freyne’s apartment and found no one there.

We tried to imagine Freyne on an exotic trip, or having a wild love affair. But in fact he’d already been transported to Fletcher Allen — with a massive strep infection that had spread to his brain. The cops didn’t let us know, we later learned, because they don’t have enough personnel to call back on “welfare checks.” Privacy laws prevent the hospital from discussing a patient’s medical condition with anyone who isn’t a relative.

So how did we find out about Freyne’s condition? Not from Peter, who was basically unconscious. A third Speeder’s employee — who is also Freyne’s neighbor — saw the ambulance take him away on Friday afternoon. If we hadn’t called the hospital and explained that we are Peter’s only “family” in the area, he would have been on his own.

“This is exactly the way the community should be taking care of each other,” Burlington Police Chief Michael Schirling says of the situation, noting that it’s unusual for a welfare check to come from a business. “Know your neighbors,” he continues. “If you sense a change in normal behavior, or you don’t see them for a day, or the newspapers start to pile up, it’s probably a good idea to have a family contact person. If all of that fails, you can always call us.”

But don’t expect to hear back. It’s definitely “a hole in the system,” Schirling acknowledges. “One of the things I’d love to do in the future is to follow up with every person who makes a report, or complains about something, with a phone call. It’s high on my wish list.” After noting that the police department’s limited resources dictate prioritizing, he adds, “But I need to know where it is on the community’s wish list.”

Luckily for all of us, and particularly for Peter Freyne, we belong to a great one.

UPDATE: After battling cancer, seizures and a strep infection that spread to his brain, Peter Freyne died peacefully at Fletcher Allen Health Care at 12:26 a.m. on 1/7/09.