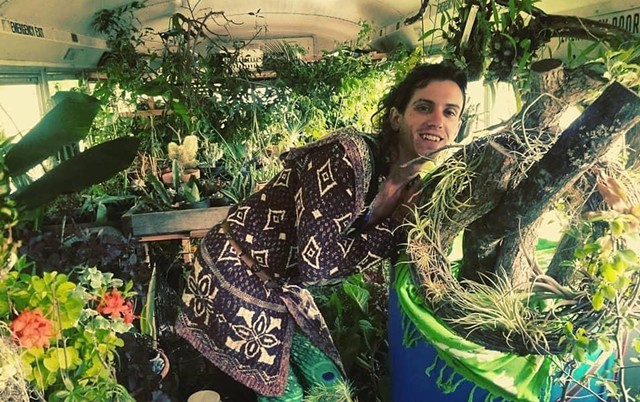 This story was updated on April 19.

Fern Feather found beauty in the smallest things. She loved bugs and rocks and plants, and photographing them. A former restaurant worker, she used to serve glasses of water not with a single wedge of lemon, but with a plate of fruit arranged in mandala patterns, no two designs the same.

Friends described Feather as gentle and kind, a person who so hated violence that she eschewed the phrase "kill two birds with one stone" and instead would say "plant two flowers with one seed."

"She was a part of the town. A fixture, someone that everybody knows." Murphy Robinson tweet this

So when friends learned that Feather — a 29-year-old transgender woman — was stabbed to death in Morristown last week, they were devastated.

"She was a part of the town. A fixture, someone that everybody knows," said Murphy Robinson, a friend of Feather's.

"It really has shattered the sense of safety that me and my queer and trans friends have here," said Robinson. "I'm very glad the suspect is in custody, but it feels like we're living in a less safe world than we were."

Seth Brunell, the man accused of killing Feather, pleaded not guilty to a second-degree murder charge at an arraignment last week in Lamoille County Superior Court. Brunell, 43, was being held without bail at the Northeast Correctional Complex in St. Johnsbury. He faces a maximum sentence of life in prison.

Feather's death has spurred calls for Brunell to be charged with a hate crime — and a petition to that end has already amassed more than 9,000 signatures. In a press conference last week, deputy state's attorney Aliena Gerhard said the state doesn't have the evidence to support the charge but that the case "is constantly evolving. 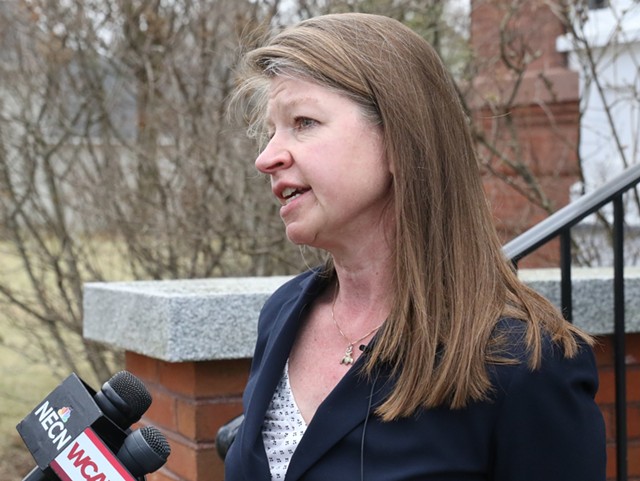 "We are getting new evidence every day," she continued, "and if the evidence presented to us supports the charge of a hate crime, we will certainly pursue it."

According to court records, Brunell was hitchhiking when Fern picked him up several days before her death; the two began spending time together. Around 8 a.m. on April 12, deputies from the Lamoille County Sheriff's Department responded to a report of a suspicious vehicle in the parking lot of the local school district offices.

Police found Feather and Brunell in the car and learned he'd recently received psychiatric care and that the two of them were looking for a place to walk their dogs. The deputies stood by until they drove off, court records say.

At 9:15 a.m. that day, a friend of Feather's invited her and Brunell over for coffee. Feather declined, but "their conversation seemed normal, and nothing stood out of the ordinary," the friend told police. An hour later, Brunell called the friend back and admitted to killing Feather, according to a police affidavit.

Around the same time, a motorist saw Brunell standing near a body on the side of the road and called 911. Brunell reportedly told police that Feather attacked him after he rejected a sexual advance. "I told [Feather] I wasn't gay," Brunell told police. "I was just protecting myself."

Police, however, found no evidence that Brunell had been attacked. His clothes were clean, and he wasn't injured, the affidavit says. Police later found a 12-inch, bloody knife at the scene. An autopsy determined that Feather died of a stab wound to the chest. 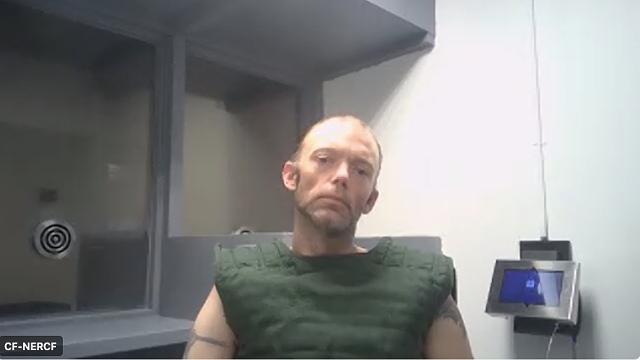 Brunell has twice been convicted of felony charges in Vermont, including a previous stabbing, according to a conviction report from the Vermont Crime Information Center. In 2004, Brunell was sentenced to 11 to 12 months in prison after he stabbed a man in the chest with a kitchen knife, critically wounding him. According to media reports at the time, the men had been fighting over a woman for several months before the altercation.

In 2010, Brunell was convicted of grand larceny after robbing a Waterbury convenience store of $2,200 in cash. He was sentenced to between 30 days and 18 months in prison, according to the conviction report.

Feather's death has spurred an outpouring of grief from the LGBTQ community. Hundreds of tributes have been posted online, including from the American Civil Liberties Union of Vermont and the Human Rights Campaign, a national LGBTQ rights advocacy group. State leaders including House Speaker Jill Krowinski (D-Burlington), Sen. Kesha Ram Hinsdale (D-Chittenden) and Senate President Pro Tempore Becca Balint (D-Windham) — the highest-ranking openly gay person to ever serve in the state legislature — have condemned Feather's killing.

"As we look across the nation, LGBTQ kids and adults are under siege," Balint said last week during a candidate forum for U.S. House candidates. "And it touches me, personally."

More than a dozen of Feather's loved ones attended Brunell's arraignment last Thursday, some wearing feathers pinned to their lapels to honor their friend. One person clutched a fern leaf while waiting for the proceedings to begin. Another broke into tears as Gerhard, the prosecutor, described Feather as someone who had a fluid gender identity and used all pronouns. An obituary for Feather described her as "a star-being, beyond gender" and "made of light."

Feather "was a human being," Gerhard said. "That is what is most important in this case." 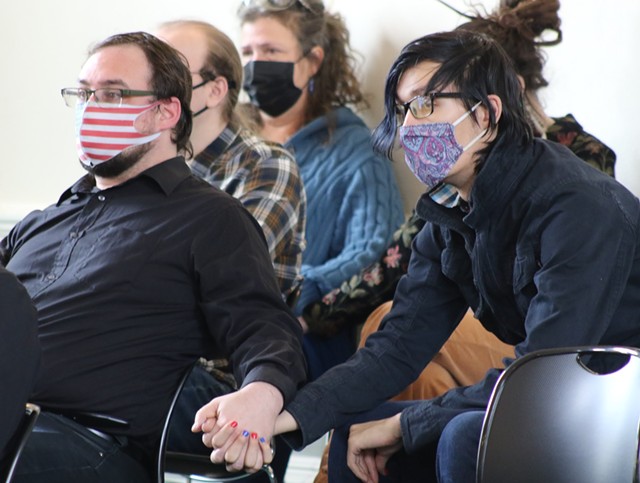 Feather had just recently come out as a trans woman and was known over the years by different names and pronouns. Toussaint St. Negritude, a friend of Feather's and a gay man, said he most appreciated Feather's ability to live "a full, honest life."

"They were just so unapologetically real," he said. "I hope [this killing] doesn't scare people back into closets or back into hiding. I think it's necessary that we all come further out as a collective force and not let this hatred win."

Feather's killing comes at a time when violence against trans people is on the rise. Last year was the deadliest on record for transgender people, who are four times more likely than cisgender people to be victims of crime, a University of California, Los Angeles School of Law study found. This year, dozens of states are considering or have passed legislation targeting LGBTQ people, such as Florida's "Don't Say Gay" bill that bans discussion about gender identity in elementary schools.

Vermont isn't isolated from anti-trans rhetoric. In recent weeks, the state Republican Party has waged a campaign against a bill that would allow trans and nonbinary youth to receive gender-affirming health care without parental consent. Burlington GOP chair Christopher-Aaron Felker, who came under fire for previous transphobic tweets, posted photos of the bill's sponsors with the hashtag "groomer."

The term, used to describe the actions of pedophiles trying to earn children's trust, has become a buzzword in conservative politics to describe people who support discussing gender identity with children. Such conversations have become more commonplace, particularly in schools — including Burlington's.

Ingraham charged that educators such as Ellis are undoing "any semblance of traditional values" that children have learned. The segment prompted a flurry of hateful messages from people across the country, according to Burlington School District superintendent Tom Flanagan.

"The hatred here, this threat, this same threat that just killed Fern, is here in Vermont," St. Negritude said. "It is here, and it has been here, and everybody knows it. And especially in the queer community." 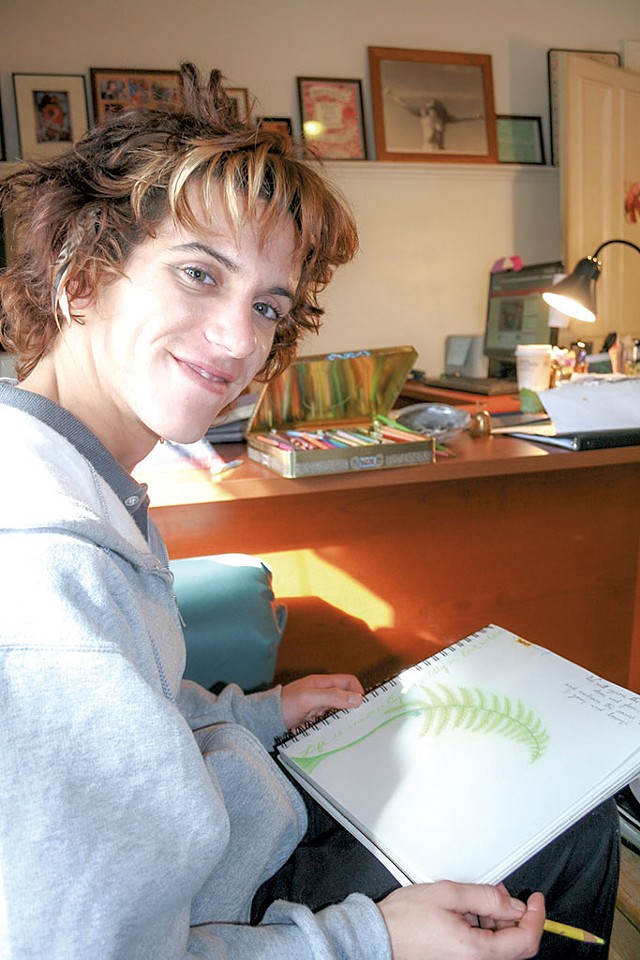 In a statement last week, Gov. Phil Scott said Vermont isn't immune to the "disturbing hostility towards the transgender community."

"We must commit to continuing our work to make Vermont a more inclusive and welcoming place," he said. "Exploiting fear and targeting divisive rhetoric at people who are just trying to be who they are is hateful and can lead to violence."

Some say they are grateful that last year Vermont enacted a law that banned the so-called "LGBTQ panic defense." It bars a killer from arguing that their victim's sexual orientation or gender identity drove them to violence. Rep. Taylor Small (P/D-Winooski), the bill's cosponsor and Vermont's first openly transgender lawmaker, said Feather's case "is a textbook example" of why the bill needed to pass.

"It has been a difficult week trying to balance the gratefulness that we were able to pass such a bill with unanimous support ... with the difficulty of actually seeing it come into action," Small said, adding, "A victim should never be blamed for a crime that's committed against them, especially if it's because of a marginalized identity that they hold."

Brunell's attorney, David Sleigh, said it's premature to "jump to any conclusions" about the case. Sleigh, who entered a "not guilty" plea on Brunell's behalf last week, said he can't speculate what defense his client will use but noted that self-defense "will be explored thoroughly."

"The notion of self-defense was asserted by Mr. Brunell, at least as the police quote him in the affidavit of probable cause," Sleigh said. "We will be defending this vigorously."

Many friends said it's inconceivable that Fern would have hurt anyone. Suzanne Podhaizer, a former Seven Days food writer, recalled Feather as a lover of plants and animals who enjoyed taking walks in the woods. Feather had worked at Salt, Podhaizer's former restaurant in Montpelier, for three years, and the two became friends outside of work. They leaned on one another during tough times.

The last time Podhaizer saw Feather, in a chance meeting at City Market, Onion River Co-op in Burlington two years ago, they talked about going foraging for wild ramps but never did.

Podhaizer will remember how Feather "would make you feel like you were lovely" when you were feeling down.

Feather would "compliment your hair or skirt or toenails. Whatever it was that was bright about you, she would notice and illuminate it," Podhaizer said.

Robinson also reflected on Feather's bright, adventurous spirit. With a laugh, Robinson recalled the time Feather took off on a cross-country road trip on a whim, her cat in tow. And then there were All Species Day celebrations, Montpelier's annual spring awakening with music and puppet shows, when Feather would dance on the Statehouse lawn.

Like so many others, Robinson has been trying to make sense of Feather's death.

"Did he think that because Fern was trans that this would be a throwaway person that nobody cared about?" Robinson said of Brunell. "Because that couldn't have been more far from the truth. She was so deeply beloved."

The Pride Center of Vermont's SafeSpace support line can be reached at 802-863-0003 or pridecentervt.org/safespace.