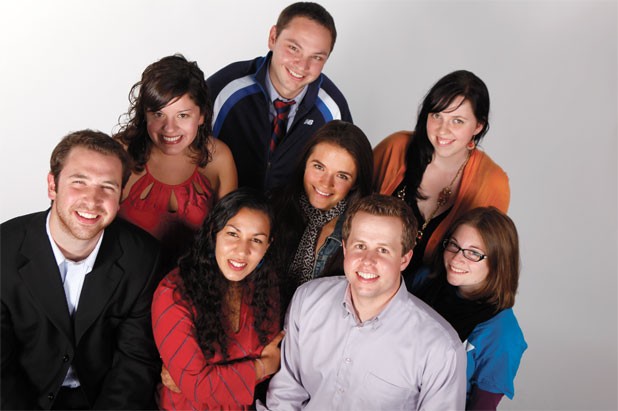 Three years ago, Montpelier sounded the demographic alarm. Vermont’s Department of Economic Development released a report showing that the Green Mountain State had the lowest percentage of 25- to 29-year-olds of any state in the country. Concerns about the shrinking tax base spurred the Douglas administration to launch PursueVT, an expensive campaign to lure young people from outside the state to live and work in Vermont.

But the state’s marketing efforts did little to address the needs of the twenty- and thirtysomethings already here. Now many of those sought-after young professionals are organizing themselves, in hopes of making this small, rural state a place they want to stay.

Who qualifies as a “young professional?” None of the groups offers a strict definition of the term, but their members are generally in their twenties and thirties, unmarried, and still more interested in seeing a show at Higher Ground than attending a school board meeting. They’ve just started their career, launched their first business, or are waiting tables until they land a decent full-time job.

The groups offer the usual mixer fare — schmoozing and boozing — and a new one, tweeting. But these nascent, nonpartisan entities are expanding into politics, too, with the goal of educating young voters and influencing policymakers on issues important to them, such as affordable housing, green jobs, rising student debt and high-speed Internet service.

“There’s the AARP for retirees, labor unions and many interest groups that represent different demographics,” observes Mark Hall of South Burlington, a 26-year-old strategist at New Breed Marketing and president of VYP. “But there’s really no one that represents the up-and-coming people that are going to be taking over this state.” Until now.

In late August, 90 people attended a “Drinks and Politics” forum hosted by the Vermont Young Professionals at Burlington’s New Moon Café. One attendee complained he doesn’t know where the candidates stand on issues of interest to him. From that conversation came the questions, answers and analysis that appear in this week’s issue of Seven Days.

The Burlington Young Professionals Group isn’t sitting around on its hands, either. Republican Brian Dubie and Democrat Peter Shumlin will answer questions submitted by BTV YPG members via Twitter and Facebook in a live debate on October 12.

Young people certainly have a lot to be concerned about. Thanks to the Great Recession and skyrocketing tuition costs, today’s college graduates finish school owing as much as $40,000 in student loans and face an uphill climb to pay it back. Only a quarter of 2010 liberal arts majors had a job in hand at graduation, and starting salaries for those students have dropped almost 9 percent since last year, according to a study by the National Association of Colleges and Employers.

The jobless rate for college graduates under age 25 was 8 percent in April, according to a recent article in the New York Times. That’s better than the overall unemployment rate of 9.9 percent, but consider that in 2007, before the recession began, just 3.7 percent of college grads were unemployed.

The picture was so bleak that in March the Onion ran a spoof story headlined, “New College Graduates to Be Cryogenically Frozen Until Job Market Improves.”

Here in Vermont, the numbers are more favorable — the unemployment rate is just 6 percent, and the University of Vermont and St. Michael’s College report that their grads are faring better than their peers nationally. Vermont also has the oldest work force in the country; the median age is 42.3. One state economist says that’s good news for young workers.

“If you’re a young person with an education and a specialty, the future looks bright,” says Vermont Department of Labor economist Mathew Barewicz. “Because of our aging workforce, one of the biggest concerns facing the labor market is how we’re going to replace those knowledgeable and skilled and experienced workers who are going to be eventually retiring.”

Vermont Young Professionals got its start in the fall of 2008. Kesha Ram, then 22, was campaigning for state representative door-to-door in Burlington when she came to Mark Hall’s house. Within minutes, Hall had enlisted Ram to help form what would become VYP, whose threefold mission is networking, professional development and volunteering.

“There’s a lot of lip service being paid to young people without them even realizing how powerful they are if they get together and pay attention,” says Ram, who is currently Vermont’s youngest state legislator.

VYP finally launched this past May — with only a Facebook page and $86 in cash. The group threw a party at Das Bierhaus in Burlington and has since kicked organizing into high gear. Today, VYP counts more than 200 members from all over the state.

One of them, VYP director Elisa Garcia-Rey, is a 26-year-old digital strategist for Tag New Media. She moved to Burlington from Boston in January. Fashionable and soft-spoken, Garcia-Rey was lured to Burlington for many of the same reasons Kiplinger’s Personal Finance magazine ranked the Queen City #8 on the list of America’s “10 Best Cities for the Next Decade:” It’s creative, full of entrepreneurs and has a great local-food scene.

“In Boston, everybody’s kind of out for themselves and climbing over each other on the corporate ladder,” Garcia-Rey says over drinks at Muddy Waters with the VYP leadership team. “Whereas here I feel like people are more interested in keeping businesses healthy and keeping everything small. There’s a lot of opportunities to make something of yourself up here, even though there aren’t these huge corporations that have thousands of jobs to offer like in other cities.”

Erika Keith, 24, also moved from Boston to Burlington. She took a job as volunteer coordinator for Planned Parenthood of Northern New England. She’s glad she moved, but she took a salary cut to come here. And she still pays the same amount of rent as she did in Boston.

“It’s definitely hard to swallow sometimes when I look at rent prices and what it’s going to cost me to be in a two-bedroom place with another person,” Keith says. “And I say, Wow, I actually could probably find something cheaper if I was still living in Boston and trying to find a place in Cambridge or Somerville.”

Bianka LeGrand, a 29-year-old university instructor from Milton, chimes in. “I look at jobs in other states with a heavy heart, what you could be paid, how quickly you could get a job if you moved to Massachusetts or New York,” she says.

“I lived in Boston my entire life and never felt as supported and encouraged as I do here,” she says.

At Vermont Law School in South Royalton, third-year law student Charlie Handy recently formed the Young Professionals of Vermont, a group he envisions having two missions: lobbying the state for business-friendly policies and educating young voters about their elected officials, particularly legislators, who Handy says “sneak in under the radar.”

A Burlington native, Handy went to college in New Hampshire and returned to find that most of his high school friends had moved away.

“I was asking them why, and every one of them had the same answer: They can’t find a job,” Handy says. “Or if they do find a job, it’s not paying them enough to live and raise a family in Vermont.”

Handy is facing his own employment dilemma. The 25-year-old wants to work as a state prosecutor in Vermont, but says the recession has lowered turnover rate at courthouses around the state. Handy interned for Chittenden County state’s attorney T.J. Donovan last year. When Donovan heard about Handy’s predicament, he urged him to be “an advocate” for young workers.

So Handy launched a Facebook page in July with the help of a few friends, and is incorporating Young Professionals of Vermont as a nonprofit so it can raise money and have a presence in Montpelier. Today, the group counts 163 members on Facebook.

The Burlington Young Professionals Group is a different animal, spun off from the Lake Champlain Regional Chamber of Commerce as a way to engage the next generation of Vermont businesspeople. Since launching in February, the group has eschewed the chamber’s more staid “Business After Hours” mixers in favor of a rock-climbing happy hour at Petra Cliffs and a kickball tournament in August that raised money for a local charity.

The Chamber’s Gen Burnell describes the membership as “early 20s to late 30s, entrepreneurs and business owners” who are seeking a “certain level of networking experience and professional development experience.” Translation: The Chamber’s got major institutional support and senior members who can mentor tomorrow’s leaders, if they get involved.

On the other end of the spectrum, but practically sharing a name, is the Burlington Young Professionals, a Meetup group with 223 members listed on its webpage. Pike Porter, a Burlington real estate agent, runs the group as a place for young professionals to socialize and meet new people, especially those who’ve just moved to town. Networking is a byproduct of the monthly meet-ups, Porter says, but not really the purpose.

“It’s just social,” Porter, 40, says. “Getting out, having fun with other folks. There’s not any greater agenda than that.”

That four distinct groups of young professionals have emerged simultaneously in Vermont should bring great comfort to the doomsday demographers of 2007. What could be better? If the foursome found a way to work together. Call it a mixer.

Find out in this first-ever Vermont Young Professionals gubernatorial survey. The topics came from 98 VYP members, who identified their concerns in an online poll.